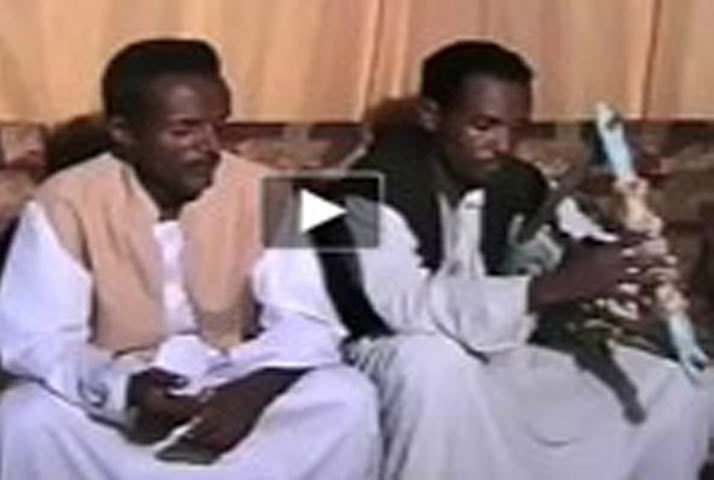 This is a beautiful clip from Western Eritrea criticizing modern Eritrean songs and comparing today’s music, artists and the characters that accompany them with the dignified, refined music of  other giants of Eritrean artists [the singer admires Ogbagaber, Yemane Barya, Hamed Wed Sheik, Wed Amir, and Abrar Osman.] The sarcastic and intelligent music is delivered in a genre known as Kmbob, where the spoken word in the form of poetry is accompanied by Rebaba, a six-stringed instrument similar to a lyre. In this Kmbob, the artist is talking about Song as if it were a person. The following is Awate Team’s translation of the Kmbob from Tigrayet to English. Unfortunately, we do not know the name of the poet or the musician or the producer of the clip which we found posted on the facebook page of our friend Sheikh Mohammed Juma’a from the UK. We will try to  find the artists and producers who deserve all the credit. When we find them, we will ask for more of such great work to satiate our thirst for a refined art form.

Song: is bloodied, shall we complain to the police or the judge?
If you listen to the radio, “let me kiss your lips!”
If you watch the TV, all legs and butts,
This is not Song, but bodies cheaply [displayed].

Song is destroyed, it fell and [and fell with a thud],
Song: let me borrow from you, and I will pay you later,
Song: brush away the debts, forget it altogether,
Song: is Yemane Barya, but the evil eye* dried it up,
Song: is Idris Son of Amir, that burned in its sleep,
But today’s Song: it neither traveled nor returned,
Oh Song! Sadly, today you are sick; bad luck befell you,
Wake up, get ready, we need to take you to the doctor.

Song: you are diminishing in this bad age,
You are wandering like fenced goats,
Today you have become bitter; you were sweet before,
You didn’t find Barya or Son of Amir,
Your market went dry, and you are thirsty,
You depend on water from the goatskin of the minister**,
Didn’t we know you with the lyre, drums and dancing of braided hair?
Alas, the demons landed on you, those with organs and brass.

Oh men! Bear witness as Song is being assailed,
You see an “artist” jumping and the organ crying, neeq, neeq,
We saw the stolen Song and its complaining owner,
Where would the debts of Song be paid from?

Song is Oqbagabir, if you wish for a meaning and history,
Song is Abrar son of Osman: listen to the lyrics and the melody,
And Song is Hamad, son of Sheik, as he raises the dust.

Song: remained in the streets, it neither left nor returned,
Song: is sick, its ailments unknown
It is laying in a hospital, neither alive nor buried with the dead,
It lost the Son of Amir to death, and the rest, to old age.

A new law has come, we don’t know a source for it!
Song needs a solution, it is dying, it is to depart!
It is not a border demarcation, advised by a committee.
Song is judged by the people: they reject or choose it.

*mn aayunu neshfa could mean ‘dried from its source’ as ZHaile says, but we think it means, ”when an evil eye befell it’ (as in Tahassidu, as in ‘aayenewu.’ )

** A reader hears zeer (clay pot for water.) Ours is more poetic; since Zeer (water container) is not common in the culture of the singer as is Harib, a goatskin. He says, mn may Harib wezir. Given the context, border demarcation, army, commanders, and committee, the minister makes sense. Thanks, Mahmood Abdalla! One more time, poetry yields to reality.