AlJazeera: The Tragedy of The Eritrean Refugees In Sudan 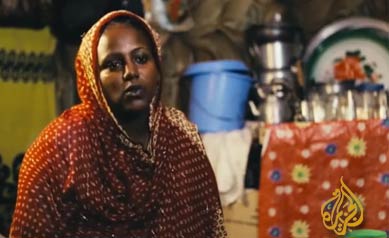 [The following is the translation of the Arabic text report by AlJazeera that accompanied the video report. Awate.com bears responsibility for any errors in translation]

From the frying pan into the fire: The Tragedy of The Eritrean Refugees In Sudan
A Report of the episode by AlJazeera.net

They left their country because of war and persecution by the rulers, and fled to the Sudan in search of security and stability, but they found themselves prisoners inside camps that lack the minimum requirements of life, in addition to what they face: kidnappings and trafficking their organs. They are refugees most of whom arrived from Eritrea, and they are living a major a humanitarian tragedy that [AlJazeera’s program, “Under the Magnifying Glass”] brought to light on August 20th, 2014.

More than one hundred thousand Eritrean refugees live in Eastern Sudan, some of them since 1967, and others since 2010. The first wave of refugees began to arrive to the Sudan in 1952, but the mass arrivals began in 1967, because of what is still continuing [in Eritrea] even today.

According to the Director of the Refugee Commission [of Sudan] Hamad AlJezouly, large numbers of refugees voluntarily returned to their country after the liberation of Eritrea, but after five or four years, a new wave of youth, refugees aged between 18 and thirty years [began to arrive].

The director of refugee protection, AlSir Khalid Mahmoud, also confirms that a new wave began [to arrive] in 2004. [Eversince] Sudan has been receiving between 200 and 250 asylum applications daily and between eight hundred and a thousand applications monthly.

There are many reasons for asylum, including repression and war in Eritrea, as well as the harsh compulsory military service for indefinite periods that is imposed on all who finishhigh school—that is what Abdallah Saleh Ali—who has been a refugees in the Khshm AlGirba camp since 1978, who says, that Eritrean cities have become ghost towns where only old people aged between seventy and eighty years [live].

Aster Zeroum, who has been in the Shegerab refugees camp since 2010, had another reason to leave her country: she was raped by one of the sons of the officials and she became pregnant; she had to escape to the Sudan.

The United Nations High Commissioner for Refugees is responsible for the nine refugee camps in the Sudan. Kai Nielsen, the representative of the High Commissioner, says that the mission of his organization is to help the Sudanese government to deal with refugees and newcomers, and he confirmed that there are ninety thousand refugees, mostly from Eritrea, in Eastern Sudan.

Suffering and An Unknown Fate For The Eritrean Refugees (AlJazeera)

However, this support does not meet the requirements of the refugees who expressed their tragedy to [AlJazeer’as program] “Under the Magnifying Glass”. A refugee, Mebrahtu Zekarias, says, “I surrendered myself to the International Organization to be protected, not to suffer”, while Mahmoud Abdul Hamid, a refugee at the Khashm AlGirba camp since 1979, says, he does not have dinner for his children. He continues, “The Eritrean people are dying… cattle fare better!” He then broke down sobbing for his situation and the situation of his people.

There are also many [other] problems in the refugee camps—there are no jobs, and education does not reach all the people, in addition to the many diseases that are caused by the deterioration of health services, except for the scarcity of water and lack of electricity, and above all, the refugees are prevented from leaving the camp; they can only be smuggled.

The director of the Refugee Protection blames the deterioration of the situation to the UNHCR, which [he said] stated that it has lifted its hands and will not support these camps which became a burden on the Sudan. He says, “We will not allow and will not handle issues that are supposed to be taken care of by the United Nations”, while the representative of the High Commissioner says, “There are no change of plans concerning the support of refugees.”

On top of their many problems, the residents of the camps are exposed to kidnappings by “Rashaida” bandits who are accused of kidnapping people, torturing them, and sometimes killing them after they transfer them to Sinai, Egypt. One of the kidnapped confirmed that they were tortured at the hands of the kidnappers who demanded ransom, and those who cannot pay had their body parts extracted by a well-known doctor who operates [on the kidnapped] without anesthesia, resulting in the death of many people.

Amid these problems, the Eritrean refugee remain hanging on an unknown fate, something that a refugee in the Shagerab camp refers to by saying, “I love Eritrea, but many times I feel I do not have neither an Eritrean nor a Sudanese identity… there is an unknown fate.”