AlBashir Sticks Out His Tongue At The ICC 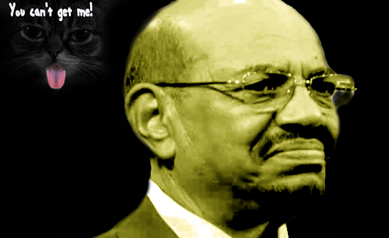 AlBashir was not the only one, South Africa also stuck its tongue out at the ICC, so did many African leaders, including dictators who naturally want to see the ICC close shop.

On Saturday, AlBashir had arrived in South Africa to attend the African Union summit; the summit concluded on Monday. The moment he arrived, the local and international media was all smelling blood, they all wanted AlBashir behind bars. At the same time, the wanted man kept a smirk sculpted on his face. He seemed to say, “Come and Get me”. No one did. And it is a mixed feeling for most Africans, not the leaders or governments, but the oppressed people.

The  International Criminal Court (ICC) has issued two arrest warrants against AlBashir, one in 2009 and another in 2010. So far, he has been travelling in the Middle East and Africa without meeting an officer who carries an arrest warrant. He is accused of genocide in Darfur where hundreds of thousands of civilians were massacred.

The ICC began its work after the Rome Statute was enforced on 1 July 2002. Over 120 countries have signed the statute and technically they should obey the ICC orders. It doesn’t seem so.

The ICC has several liaison offices in several Western countries, but almost all its field offices are (or were) in Africa, the unfortunate ghetto that needs a few law enforcement institutions. The court volunteered though it is not welcome in most places. And that is the problem; most African leaders (including dictators) and Pan Africanists agree on that. Is the ICC an entity created to govern the “ungovernable Africa”? Some African critics say it is because its laws are written in black ink as a gesture of goodwill and voluntary paternalism, meant only for Africans. The jury has not yet decided if that is the case.

In 2007, the ICC had a budget of about $100 million which grew to $150 million in 2010. Estimates are that since 2007, the cost of running the court has surpassed the $1 billion mark. Trying AlBashir would have added a few hundred million more to the tab.

In recent history, the ICC has apprehended a few bloody war-criminal-stars, including Slobodan Milosevic of Serbia who died in 2006 while in detention in The Hague; Radovan Karadzic the ex president of Srpska who has been on trial since 2009; General Ratco Mladic, the commander of the Army of Srpska Republic, Bosnia and Herzegovina who is on trial since 2012; and Charles Taylor of Liberia to name a few prominent blocks. The ICC has mainly sentenced war criminals from Serbia and Africa; several criminals are in detention.

Currently, the court’s prosecutor is working on cases in many countries and the numbers are on the increase, though, so far, less than 50 people have been indicted publicly. However, the number of people whose cases the ICC is looking is minimal relative to the noise about the institution. The multi-million outfit spends a lot more in trying criminals than what is spent on helping their victims.

Joseph Konye is a good example. The famous unhinged man who has been wreaking havoc in Uganda and who in indicted by the ICC. No one knows the cost of his indictment and if keeping him in the active court records entails maintenance cost. A Ugandan teacher said, “if they put a reward for his head, probably a few million dollars will bring his end.” But courts do not do that, they wait until someone does it so they can prosecute.

As it is now, the ICC doesn’t have much regard for the sovereignty of other countries; but its all powerful stature scares dictators more than the wrath of their people. And that is the dilemma that Africans face: should they be happy the ICC is giving nightmares to their tormentors, or they should oppose its new-colonialism styled mandate? What would African nations feel When some strangers run their justice system, like others aspects, from far places?

No doubt the justice system in most African nations is corrupt, but would they willingly forfeit their sovereign rights of dispensing justice to the ICC? What would be the weight of the moral and emotional damage to a country when its leader, albeit a hated dictator, is taken away to be tried in another country, by foreigners?

That concern is what led the Libyans to refuse to hand over Saif al-Islam Gaddafi to the ICC; instead, they decided to give him a homegrown trial. In fact, that seems to be the choice of most Africans–to be able to try their abusers themselves.

There is a neighbor of AlBashir who might be walking on the same avenue: Isaias Afwerki of Eritrea. Last week, a UN’s Commission of Inquiry on Eritrea (CoI) issued a 485 page report about its investigation, which contained hundreds of interviews with Eritrean victims and witnesses, as well as foreign government in many countries. The report is damning for the regime that Isaias Afwerki runs like a mafia outfit. An Eritrean lawyer said, “just a small portion of the report is enough to earn Isaias Afwerki and his aides a guest space in the Hague cells.”

Eritreans were not surprised by the CoI report; they knew its content all along. However, their knowledge was bits and pieces that had no shape, and they have not compiled it in the way the CoI did. No doubt Isaias’ crimes are not less than AlBashir’s who is walking with two arrest warrants on his back. Iasaias is walking with thousands of warrants issued by the citizens he has been abused for decades, though they couldn’t enforce them until now. When one day they decide to enforce the warrants on their own, the ICC might not find anything to try.

Most Eritreans wish to have Isaias and his cohorts tried in an Eritrean court, though it can’t be done immediately. The imminent danger is the risk posed by the staying of Isaias and his party in power  any longer. Many Eritreans do not wish to have the ICC do their job for them; they would rather do it themselves. And the ICC’s stand in Africa is not that impressive.

Many African countries have defied the ICC,  including Kenya, Ivory Coast, Uganda, and the AU chairman, President Mugabe of Zimbabwe–even the Ethiopian Prime Minister is quoted as saying “The manner in which the ICC has been operating has left a very bad impression in Africa. It is totally unacceptable.” when he was the AU chairman in 2013. And now, South Africa considers the ICC “no longer useful”.

On Monday evening, Omar AlBashir returned to his country amid jubilation; he was received as a hero who defeated the ICC. A source from Khartoum told awate.com, “even his staunch political enemies were happy he defied the ICC, which is a tool of neo-colonialism.” South Africa spoiled a celebration.

The arrest warrant issued by a South African court was literally not worth the paper in which it was written. Worse, reports indicate that the court ruling barring AlBashir from leaving South Africa and subsequently the arrest warrant came out long after he had already left the country on a flight  that signed off as Sudan 01, the equivalent of Obama’s “USA Air Force 1 that climbed the skies from an Air Force Base near Pretoria”

A source in South Africa told awate.com, “It was like a James Bond operation,  AlBashir’s airplane moved from a civil airport in Johannesburg to a military airport near Pretoria; He slipped through the fence and was cruising in the clouds while Judge Fabricius was still deliberating.”

Should AlBashir have been detained and tried?

Of course he should have. Many others like him should have. But the man has been in power since 1989 when he overthrew the democratically elected government of Saddiq AlMahdi. The West had no problem with that and continued doing business with him for years before George Clooney got angry and publicized the Darfur massacres!

Wouldn’t it be easy for the West (and for victims of dictators) if the West just refused to deal with autocrats who abuse their people? If they did that, the world wouldn’t need ICC or its sisters, which are afterthoughts of the blunder that the West nurtures. And the West reacts when the dictators step on their toes; if dictators watch out for pink toes, they can keep walking over rivers of blood and beds of the skulls of their helpless victims. No one would bother them. Not even ICC.

That is why the ICC is not popular in Africa. Unfortunately, the people and the dictators agree on this one for two diametrically opposite reasons. And that is why AlBashir’s victims cheered him upon arrival in Khartoum as the “Lion of Africa”!

Many Africans we talked to for this report sounded schizophrenic regarding the AlBashir drama; they wish he was apprehended so that his abused people will breathe freely, while at the same time they despise the paternalistic attitude of the ICC. How does one reconcile that?