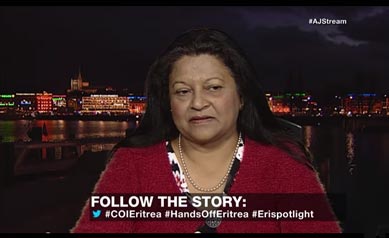 On June 16, 2015, Al Jazeera’s The Stream hosted her excellency Ms Shiela Keetharuth and three other Eritrean guests to discuss the report that was issued by the UN appointed Commission of Inquiry on Eritrea. The extensive report is damning and it has angered the Eritreans government.

The extensive report contains minute details covering the ordeal of Eritreans and their suffering, particularly the youth who are escaping Eritrea to avoid the forced labor that the People’s Front for Democracy and Justice (PFDJ). The PFDJ which has been ruling Eritrea un-elected since more than two decades is chaired by Isaias Afwerki who is also in power un-elected for decades.

In addition to Ms Keetharuth, the panel included two guests: Ms Rahel Gebreab and Filmon Zerai, Diaspora Eritreans who support the Eritreans regime, while the third, Saleh Johar, is an exiled Eritrean barred from returning to his country.

The government has jailed thousands of Eritrean political dissenters, adherents of banned churches, reporters, and others who remain in prison since long years without charges.

There are over a million Eritreans in exile; some are stranded in refugee camps since the late 1960s, while others, who number tens of thousands, are mainly youth who fled the the PFDJ regime in the last decade.

About a quarter of the total number of Eritreans live in exile.