A Leaked Speech For The First Anniversary Of Lampedusa 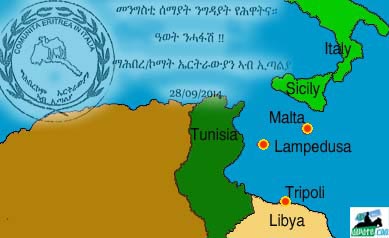 Gedab News has received a leaked copy of the speech that has been prepared by the Eritrean regime to be delivered at the planned event to commemorate the first anniversary of the tragedy of October, 3, 2013.

On that day, 366 Eritreans perished at sea a few kilometers off the coast of the island of Lampedusa, Italy.

The speech states, “The issue for which we are gathered today disturbs all Eritreans; our youth and children are deceived by foreign conspiracies, with false hopes that cannot be realized.”

The speech also laments the state of the youth who are, “leaving behind their country that they love, their families, and people behind, trying to get to the Western countries through insecure shortcuts …” It continues, “We are here to advise and call on those who have become the tools of enemies, and are trading with the blood of their Eritrean brethren and transporting them, to desist…”

The regime has been planning to make the upcoming first anniversary of the Lampedusa tragedy an opportunity to rewrite the chronicles of the incident and whitewash its callous role in handling it.

A committee set to organize the commemoration has plans that it hopes would remedy the damage the Eritrean regime sustained because of the way it behaved during the tragedy after which a considerable number of its supporters deserted it. Since then, angry Diaspora Eritreans have been hitting relentlessly at the regime infrastructure in many countries.

Lampedusa has tilted the Diaspora balance of power between the supporters and opposition of the regime that has been trying hard to regain its influence to no avail.

In the very early hours of October 3rd, a boat en route from Libya to Italy sunk off the shores of the island of Lampedusa, Italy, with almost 520 passengers who were being smuggled to Europe by human traffickers. Only 153 people survived the incident, all male except five females.

Following the tragedy, on October 4th, 2013, Lampedusa was shut down in respect of the dead: shops, schools, and business were closed, the flag was flown at half-mast, and Italian citizens questioned the policies of their government. Officials who came to visit Lampedusa were jeered. In public events—football games, meetings—Europeans observed a minute of silence to honor the dead.

On October 6th, a religious service was held for the dead. Eritreans in the Diaspora initiated a petition to pressure the Eritrean regime to repatriate the dead and on October 9th, European Commission chief Jose Manuel Barroso disclosed in Lampedusa that the EU will give Italy 40 million Euros to deal with its refugee crisis.

In Eritrea, flags were still flying at full mast and regime supporters, at Paltalk sessions, website comments section, were either implying that the Eritreans are actually Ethiopians, or that they have nobody but themselves to blame for the tragedy. Some were writing entirely irrelevant issues to deflect attention.

As the loved ones of the dead were receiving phone calls from Lampedusa, the Eritrean regime and its media had no words much less words of comfort. But after a long silence, on October 9, 2013, the government-owned television station referred to the Lampedusa tragedy as a case of “illegal African immigrants” who are said to be of “Horn of Africa nationality,” while Diaspora Eritreans were in a state of shock and grief.

After much embarrassment, On October 9th an unsigned statement from the Eritrean embassy in Italy, posted to regime-friendly websites only, acknowledged that the dead are mostly Eritreans, that it was working with authorities to repatriate the dead back to Eritrea, and that it will provide financial support to the survivors. The flag at the Eritrean embassy in Italy was lowered to fly at half mast (five days after a flag that Eritreans have no allegiance to, the Italian flag, had been lowered.)