A Defenseless Regime With Indefensible Record

Posted on August 22, 2016 by Yohannes Zerai in Reflections 22 Comments 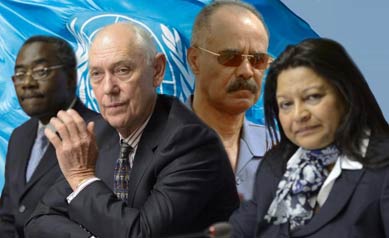 July 1st this year marked the culmination of a four-year, UN-mandated investigation into human rights violations in Eritrea whereupon the UN concluded that crimes against humanity have been committed by some government institutions and a confidential list of officials. The UN involvement in the case had its genesis in the Eritrean government’s 2001 crackdown on dissent and the trampling of civil liberties that ensued. The draconian measures of that episode had caused an international uproar that manifested itself in appeals, criticisms and denunciations targeting the regime and originating with a wide range of sources.

Regrettably, international pressure seemed to have only provoked further government actions the first of which forced the EU representative to leave the country. This was followed over the next few years by cancellations of accreditation of foreign journalists, expulsions of successive groups of NGOs and forced departure of donor agencies. These drastic steps paved the way for a decade-long international isolation that the regime had to endure until very recently and which, ironically, it blamed on “Western-led conspiracy.”

In the years that followed the crackdown, human rights violations continued to grow in scope, frequency and severity thereby precipitating a crisis that could no longer be ignored. This crisis galvanized an international Democracy and Rights activism that eventually built large enough momentum to impel, in 2012, UNHRC to intervene.

A government whose political philosophy, organizational structure and governance policies are based on the principle of “government by law” is bound to enter into a covenant with the population it governs – a covenant on upholding a constitution. This along with a principled position that embraces supremacy of the law, respects the will of the people and recognizes the governance imperative of checks and balances are the hallmarks of a legitimate and lawful government. The existence of these conditions is the best indicator of good governance, and constitutes government’s built-in defense against possible allegations of domestic and foreign transgressions. But government’s ultimate defense ought to be the free voice of the governed.

Unfortunately, realities on the ground in Eritrea have been antithetical to the very essence of this ideal governance model. The PFDJ government has long instituted a uniquely ruthless governance system which is far from meeting even the lowest possible moral and legal standards that decent human beings could yearn for. It made wickedness and brutality the cornerstone of its rule as a result of which its governance record grew increasingly indefensible. The regime itself has been rendered defenseless – defenseless not in the sense of being vulnerable to external danger, but in the sense of having totally lost the trust, respect and loyalty of its own people.

Eritrea has turned into a police state where political, economic and social aspects of life are subject to intense government surveillance and control. The people continue to be enslaved and brutalized under this suffocating rule. But, with the boots of oppression firmly on their necks, the population seem to have found it a clever ploy to “fake surrender” until the regime’s tight grip on power begins to crack under the weight of its own tyranny. It is however unimaginable that they would lend the slightest support to this abhorrent regime on any issue other than the defense of the country’s sovereignty and territorial integrity.

Stifling the Truth: Obstruction and Hostility

Faced with a serious UN investigation into its continued human rights violations, the government proved incapable of proactively countering allegations made against it. Its leaders lacked courage and political wisdom to pursue a strategy of constructive engagement that could have opened the way for rectifying problems and introducing reforms. Neither did they have the truth and the population on their side to be able to mount hard-headed diplomatic and legal challenges to the allegations and to the periodic findings of the investigation.

Thus, as the enquiry proceeded first under the Special Rapporteur (SR) and later under the Commission of Inquiry (COIE), the regime opted to respond with measures that combined obstructionism and hostility. Its leaders must have figured any support that could be coerced from the population is not worth the associated risks of affording them an opportunity for voicing their pain and agony, and for learning more about the regime’s troubles with the HRC. So, to stifle the truth, authorities not only muzzled the population, but essentially sequestered them by denying UN investigators entry into the country.

In a campaign of hostility to the investigation, government officials denounced the HRC mechanism as “politically motivated” and branded its information gathering and documentation process a “political witch-hunt”. Harassment of investigators was another component of the campaign. The government unscrupulously tried to sully the SR’s reputation by distorting her career record. Commission members were accused of serving as “a tool of the U.S. government” and their findings were branded “fabricated lies”. To assist in running the campaign, the government paid off unethical “journalists” and third-rate researchers, hired lobbyists and mobilized regime apologists abroad.

The government’s final push to discredit the work of the COIE came just a couple of months before the commission was due to submit its report to the HRC. Deploying its diplomatic missions and party operatives abroad, the regime literally scoured the world in search of members of a fringe element that would provide a semblance of the popular support that it could not secure from its own citizenry at home.

One such target were refugee communities abroad comprising Eritreans who fled their country to escape repression. Members of these groups were coerced to sign a government-prepared, self-serving “petition” under threats of familial reprisals and withholding of identification papers critical to maintaining resident status. Likewise, the regime blackmailed an Ethiopian rebel group based in Eritrea into mobilizing its supporters in Europe to join an anti-COIE demonstration that party operatives organized in Geneva last June. Ironically, a large segment of the group’s membership and many of its diaspora supporters are self-declared proponents of reversing Eritrea’s independence.

However at the end of it all, the massive attempt by the regime and its supporters to obstruct, disrupt and discredit the process failed big time, the truth prevailed and the HRC endorsed the COIE report by consensus.

The four-year UN investigation and the HRC resolution it engendered have exposed in so many ways the true nature of the Eritrean regime and that of its supporters. The legal technicalities of the enquiry aside and regardless of where the next steps of the UN mechanism may lead, there stands one undeniable truth: The HRC resolution is a political and moral victory for the victims and for all those who sought justice on their behalf. The regime’s criminality was laid bare for all to see and a “guilty” verdict was, in effect, rendered by the court of world opinion.

The regime debased the authority and prestige of government and downgraded its stature to that of a “special interest group” when it attempted to evade justice by gathering petition signatures from vulnerable and/or politically retrogressive social groups abroad. All the while, it tried to gag its citizens at home from speaking up on a governance system that has enslaved them and is the target of an ongoing international inquiry. Both of these willful, fraudulent acts (i) proved that the regime is guilty of the documented violations and (ii) established the regime’s illegitimacy as a governing authority.

As the world reacted in horror to the unfolding story of the regime’s brutality, some diaspora Eritreans chose to stand with the perpetrators and to defend the regime against so-called “international hostility and conspiracy!” Betraying their own people, they made common cause with the country’s traditional enemies to march the streets of Geneva in a futile attempt to stomp out the people’s cries for justice! The motive behind this betrayal was obsessive patriotism for some, and pure opportunism for others. But regardless of their motivating reasons, they all shall be judged by history; and hopefully there will come a day when they shall be forced to face the people and answer for their actions.