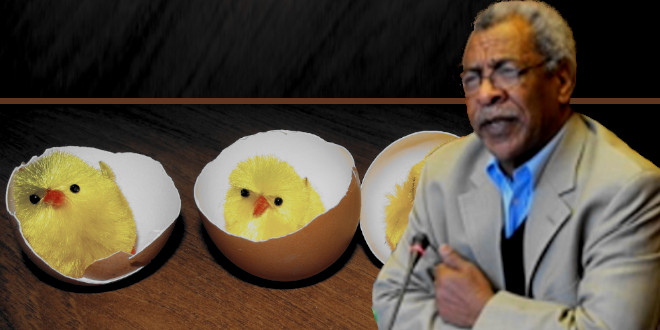 This is part 2 of 3 series under the title of “Can Mesfin Hagos Lead Under a Banner of “One Country, One Destiny”? The third part will follow soon.

Eritrea and its people have been on a trajectory of existential threat for two decades from the very revolutionaries who brought the nation its independence. The golden egg that the revolution was supposed to hatch has yet to materialize. The only political golden egg for the powers-that-be appears to rest with one leader and one leader only. The coterie that’s running the nation seems to not believe in leaving a legacy that would last for generations to come. They are not in the hatching of golden egg business, socially, politically, or otherwise. Rather they are in the destruction of the social and political fabric of a society on behalf of whom they claim to have fought a revolutionary war for thirty years.

As such, Eritreans in diaspora and from inside the country have no options left but to fend off the wrongheaded system, they have been doing that since the aftermath of the 1998 – 2000 war with Ethiopia. They have not stopped trying both from within the country and without. The urgently needed change of a formidable political structure that has been erected and entrenched in Eritrea today requires a great deal of out-of-the box thinking. Thinking that it has teeth to bite, the bites of which need to be equivalent to that of a lion, a tiger, and a hyena combined. Thinking that consists of robust strategies and tactics that can compel the regime in Eritrea to come to the table to talk. Thinking that must include organization, mobilization, and galvanization of the highest order. What made Eritrea’s political structure to survive this long is the knack it has toward pragmatic political acumen.

This political pragmatism will force it to convene with any entity it deems as a threat. Each of the following avowals by some segments of Eritrean society, for example, was jostled by the regime with a great deal of tact. The Jehovah Witnesses were made to look pariahs by the Eritrean society at large when they refused to vote in the referendum. Exacting punishment – fitting one or not – after the public was made to collude with the regime, wasn’t that difficult to execute.

The cabinet ministers were made to look like they committed treason because they wanted pluralism in the political system. The public, again, fell in line with the regime. Making them vanish in the dungeons after that wasn’t that difficult to attain. The FORTO Uprising of 2013 was the closest it came to a real confrontation, militarily speaking, the regime did what it had to do to quell it swiftly.

Of course, each of these attempts are chipping away at the power structure that exists in Eritrea today. At some unexpected time and date, the regime will be brought down, the how and the when of which is hard to envisage. Case and point, we are witnessing such a revolution in the making in Belarus today. After 26 years of ruling, Alexander Lukashenko has lost touch so much that he was booed by his own constituencies. The obliviousness of dictators is not isolated to Lukashenko, Qaddafi suffered from the same malady. The coterie in Eritrea is no different.

The diaspora political and social activism needs to find a way towards that goal. The Satellite TV outlets that Eritrean activists are transitioning towards, for example, is one that can exact the needed blow to the regime if executed right. A concept paper referenced below particularly addresses this very issue vis-à-vis the opposition satellite TVs. The impact Eritrean opposition satellite TVs are having inside Eritrea is a remarkable feat. The Concept Paper asserts that

“The key lessons from the tv broadcasting pilot over the last year is that it can be a catalyst for change and a most effective medium of communication with Eritrean’s inside and outside the country. If used sustainably and professionally, tv may well be the tool that will get the Eritrean people to rise up to repression and gain their independence from the yoke of Isaias’ rule” (p. 2).

No doubt media outlets can be lethal weapons that can serve as a tool that would expedite change. Examples abound, it would suffice to mention a few for illustration. Khomeini’s revolutionary ideas of 1979 germinated from abroad (France) in tandem with the people from within Iran. Cassette players were the technology that Khomeini had at his disposal and used it to a lethal blow. Iranian people rose up against Shah, the rest, as they say, is history of a revolution of a unique kind. What Iranians ended up getting is not the point, but how they conducted a successful revolution is.

While Iranians were conducting their revolution from the yoke of an autocrat, Eritreans were fighting tooth and nail a formidable occupier, the emperor of Ethiopia. The latter was deposed by his own people. Unfortunately, the Ethiopian regime that followed the toppling of the emperor maintained the same scorched earth policy as their predecessor did. Eritreans were left with no option but to continue the fight for the sovereignty of Eritrea and its people.

Such a revolution required not only a tenacious determination to fight, but also had to have a highly coordinated fighting mechanism that not only to sustain the fight but also to succeed, succeeding, indeed, it did. Some of those coordinated mechanisms are cassette players distributed worldwide wherever Eritreans were in diaspora, so they continued to be part of the larger struggle for independence. Of course, there were relentless artists like the late Yamane Ghebremichael “Baria” who kept Eritreans in diaspora engaged in their support for Eritrea’s dream of becoming a sovereign nation. I wish Professor Chefena, who has done some serious research on songs of the 1960 and 1970 Asmara would give a similar treatment to the revolutionary songs and their impact on Eritreans within and without during the thirty years revolutionary war.

Not only revolutionary songs through cassette tapes, but also VHS – Video Home System – were used as powerful optics to keep the public in exile motivated, galvanized, and organized. There were droves of young Eritreans who watched videos via VHS of Eritrea’s villages burned to the ground that triggered numerous young men who joined the revolution in the late 1970s from places like Saudi Arabia.

Fast forward some three decades, in 2009 Facebook became a household name around the globe.  We all have seen this phenomenon firsthand. In 2011 FB as a medium of communication played a critical role in the Arab Spring, particularly in Egypt.  Jawar Mohammed of Ethiopia’s Oromo Media Network (OMN) is another media story that is worth considering. ESAT is another instrumental media campaign that destabilized the strong political hold of EPRDF. Needless to say, ESAT was financially sponsored by no other than the political power structure that’s in Eritrea today, whom Eritreans in diaspora may just be the ones to give the regime the bitter taste of its own medicine. Eritreans need to figure out that unique element which can help expedite the direly needed change.

Satellite TVs are now serving as the seeds of change by the sheer ability to disseminate news throughout Eritrea. The use of making efficient use of Satellite TVs should become priority number one. The concern of these movement-based media outlets that receive their funding from the Eritrean public in diaspora, is the resistance they exhibit toward working together.

The meager resources that Eritreans are selflessly helping facilitate the needed wherewithal, these Satellite TV outlets must be frugal with the funding and use it wisely and conservatively; if they are going to have durability that can outdo and outlast the regime in its own game, they must begin to coordinate their insufficient resources so it isn’t made to deplete prematurely.

In other words, to be prepared for the long haul, to fight the painstakingly needed task of rallying Eritreans inside Eritrea and abroad until the demise of the regime is realized. Coordination will be a key to the revolution. An estimate from the Concept Paper indicates that about 90% of the Eritrean population has access to Satellite TVs. Locally made satellite TVs made it possible for such a high percentage of the population to own the dishes, which is allowing Eritreans inside Eritrea to access TV programs from far and near throughout the world. According to the Concept Paper, the Eritrean regime attempts to jam these Satellite TVs with little to no success.

One critically important matter that these opposition Satellite TVs must be keen to rectify is the cost: The cost based on twenty-four hours per day, at minimum one-month lease, ranges from $10,000 to $20,000 (Per the Concept Paper). So, sharing costs makes a great deal of sense. This will not only save the opposition satellite TVs a great deal of money but also will avert repeats or reruns, if you will, as well as avert “donation fatigue” that Eritreans abroad are experiencing.

The two articles as was stated before are meant to serve as a background and foreground for the next piece. As such, they are also meant to show the enormous challenges that lie ahead if someone is willing to take the leadership task to lead diaspora Eritreans. The Mesfin Hagos pivot can be made to succeed but there are numerous other issues that he must be willing to accept, as well the public willing to be led under one slogan, such as “one country, one destiny”. The task of explaining the challenges that lay in wait for Mesfin Hagos will be entertained in my final article that will follow in a few days.