Why Do We Write? 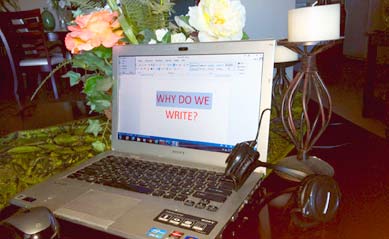 The last line above notwithstanding, Aronie is onto something with her declarative statement of why we humans write. Seemingly innocuous statement, misstatement really, misstatement on my part in the comment section to which AT and several others corrected me; the scolding of which I welcomed gracefully as I chose to stay mum not because I didn’t have anything to say, but rather the last thing I wanted to do, make that hate doing, is use the comment section to blabber my personal views, albeit unrelated to the posted article. All and all, what this brought forth, at least in my head, was this general question: Why do we humans write?

The nagging general question that refuses to go away as it metamorphoses from the generic pronoun ‘we’ to the personal ‘I’: Why do I write? What, after all, is the purpose in posting at Awate? Honest reflection and assessment will be made to address these and many more that come dashing to my head along the way. I know one thing for sure: the process of writing help clarify ideas in my head.

There is this mysterious transformation that takes place when one commits that pen to a blank page or in the parlance of today’s world when one begins to hit those keyboard keys onto a blank word-document. The process of writing gives me an immense joy, thusly, I am always in the process of writing one idea or another and when the muse is on my side is when I get the ultimate pleasure out of that process of constructing something out of a blank page. The latter seems to be at play here and I am seizing the moment, but wait a second seems to be the suggestion in my head as these seemingly clashing ideas twerk in my mind – nevertheless, the rhythmic vacillation is clear in my mind’s eye. Obviously, that does not fully explicate why one is compelled to write just because there seems to be a joy in doing something does not necessarily constitute in committing it to the written word or sharing it with others besides; and doing it in a language of instruction rather than in one’s mother tongue (but suspend this additional dance for now)

Writing is one solitary affair that I allow myself to have a license to, which permits me the freedom to think through issues of my fancy; when I do that I find that once muddled ideas begin to become clearer as I begin the process of writing. Writing is a craft of my art that I try to develop as I listen to that voice within me and stay true to it as I do. I write because I feel the urge and the need of believing in having something of value to say. I write because I feel a sense of urgency to do so and when there is a conviction behind one’s ideas of compassion, sincerity, honesty, and introspection are the natural corollaries that follow. If I lose these aspects of myself when writing, then, I will have no voice from which to write and without such a voice there exists no art in the craft of my writing. I try to stay true to T.S. Eliot’s insightful precept:  “Whatever you think, be sure it is what you think; whatever you want, be sure that is what you want; whatever you feel, be sure that is what you feel.” My truth as I conceive of it is what leads me to write; it is never about scoring politically; never about one-upmanship; it is always, I hope it shall always remain, an endeavor of sincere expression no matter in what language (there comes that dance of language again, suppress it dear self; self-restraint and discipline are the hallmark of the art of writing, are they not?)

For me personally writing was, has been, and will continue to be about opening myself to certain vulnerabilities that may lead me to a higher understanding as a result of give and take. I never enter into a dialogue to win the argument but to elevate my understanding of issues being addressed; it matters very little if my idea gains traction; what matters is that it is being entertained by readers who in turn will help me perceive and see their truth of the matter from their personal angle and life experiences, consequently, we all reach a new summit, a new height of deeper understanding, if you will. The epigraph above that Aronie shares why it is we human types write resonates with me with infinite power each time I read it. Writer’s ability does not only rest in the stringing of words together, but also in the cunning and intuitive abilities to capture readers attention from beginning to end; furthermore, having the intent and the higher purpose that takes readers to the heights of new understanding than when they began reading the writer’s initial note is mesmerizingly the goal, at least, it ought to be.

Writers have this innate desire and a knack for a story and are able to see a narrative in the making at the mere mention of a thought or idea much as how this piece was incepted. The ability to see in other people’s ideas and taking it to the next level with their own angle is something that speaks uniquely to the human spirit & capacity to reinvent and reinvigorate ideas. Ultimately, writers have the capacity to take a particular event, thought, idea, and universalize it to where they make generalizable statements making their ideas plausibly palpable for their readers.

Above it all, for a writer writing has reached its pinnacle not when readers respond or not; not only when readers read but when someone’s writing makes them contemplate, evaluate, give second thoughts as a result of a writer’s central premise, is tantamount to victory for the writer; not for its ‘gotta’ sense of victory but rather in I-never-thought-of-it- that-way kind of victory.

This is not to disregard or deny the genius in some writers who are so brilliant that they use their art and craft of writing to not only brag of their genius and unashamedly revel in the ‘gotta’ moment, but even go further than that as to insult their readers in a condescending way in a way they convey their messages across. In other words, these types of writers do not give a whit if they lose the heart of their readers so long they can show their brilliance with the power of their mind and the command of the language in which they write irrespective of whether their writing attracts audience or repels – and they seem to feel the bragging rights to do so.

These are writers who wage war on their audience instead of waging their ideas peacefully, thereby gaining readership. What these last types of writers miss is that it is not just about the written word but about the reader; it is not just about the ideas being propounded, but also about how constructively they are being received. Whether writers fall into the category of those who could care less where the chips may fall or those who are overly cautious types who want to tread the treacherous waters as not to lose their readers, either of which these are modulators of their art – both of which are using their respective truth narrated to the best of their conception of it in hopes of transmitting it to their readers.

Now, it finally dawned on me why the issue of language was interfering with my thoughts here; it is because I just read a comment that Sam lucidly interjected in my last article that I did not see until this morning, a thoughtful comment that merits an article all of its own, but suffice it for now to say this: the topic is about writing, and the tool of my trade is English language, a language to which I have instructional and educational dispensation alas I still feel some temperamental disposition which seems not to give me that depth of emotion as my mother tongue Tigrinya did during my formative years; here is a puzzle; the nation-state I was born into, in its infinite wisdom, ostensibly motivated by politics, decided that my mother tongue was not adequate enough to become the language of instruction, therefore, it was left to stay suppressed as Amharic and English ever so slowly took over in what language I would use to express my thoughts.

Thus, as Tigrinya was relegated to the spoken everyday language during my formative years and never having risen beyond letter writings that I did on behalf of my parents when they wanted to communicate with my brother who was overseas – Tigrinya never developed above this modicum and it inadvertently or not stayed in the background. Had I stayed beyond the seventh grade level in Eritrea, Amharic would probably have become the language in which I would express my ideas as it was the main language of instruction to the end of high school. So, here you have an individual whose mother tongue underwent a state of arrested development, whose middle schooling had to also undergo another mutation as the need of adopting, yet another language, namely, Arabic was in the offing as my middle school years in Cairo had demanded it. To finally coming to this totally foreign language (i.e., the English language) as defaulted position is one in which I now see the main language by which I express my thoughts. Therefore, the questions that Sam raises have colossal implications, pedagogically speaking and from policy standpoint to which I hope to give a separate treatment in the future.