We Knew it Was Wrong…

Posted on January 20, 2014 by Luwam Estifanos in Articles 40 Comments 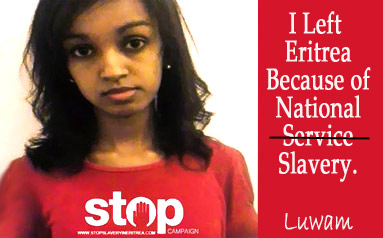 “Whenever I hear anyone arguing for slavery, I feel a strong impulse to see it tried on him personally.” Abraham Lincoln, speech, Mar. 17, 1865

I‘ve been tamed to accept servitude and captivity systematically for quite a long time and I am sure most Eritreans of my age did too. It might sound odd to say, but you never knew you were under dictatorship, nor did it occur to you that you as a human being deserve to own your life, to speak your mind, chose and do what you please. The kind of people we were: with high and promising hopes and total trust on their government and with almost no suspicion of being betrayed…that is how naive people like us young Eritreans were. We too slow to understand enslavement; we only understood it too late in the day.

The indefinite military conscription, denying us basic freedom; the continuous raids on our once safe and delightful streets, imprisoning people belonging to certain religions and the extremely cruel mistreatment wasn’t something that made our hearts nod in agreement…but it took us some time to understand the full extent of the slavery, disguised as national service. It is only now that we have come to realize that we were nothing but mere slaves of the PFDJ regime.

It all began when we were forced to join the compulsory and indefinite military service at the age of 16…yes, in a nation like Eritrea that age is the stage where you and your innocent childhood dreams and hopes part ways, instead of being well cultivated to dream big and achieve our potential while contributing to the redevelopment of our country.

There was a time when our neighbourhoods were cheerful and full of laughter of youngsters, and the streets we used to stroll around felt safe…there was a time when the very air we breathed was hopeful, where everything was ‘normal’, where the future was all promising …a time we thought it was all well and good…until it wasn’t. Our hopes and aspirations for a great Eritrea, however, fell crumbling and vanished with the crippling effect of the indefinite national service.

The war with Ethiopia has been used to justify the open-ended conscription in the military … However, it has been more than a decade since the signing of the Algiers treaty that ended the war. Yet the unlawful exploitation of the labour of the Eritrean youth continues to be carried out under the guise of national service with irreversibly destructive effects on the Eritrean society. Instead of encouraging and motivating people to redevelop and rebuild Eritrea by securing peace, law and order, the regime decided to repay our selfless contributions and sacrifices by condemning us to an eternity of slavery, brute and suffering.  Our labour has been forcefully exploited to serve the interests of elite members of the clique and works that hardly benefit neither the people nor the nation; all with mere pittance. And so we run away! We the youth have responded by fleeing enmasse, crippling the productive and defensive capability of our nation.

When they denied us the right to express our frustration with our voices…we spoke with our feet! We fled in every direction we could, deserted our once hopeful nation. For many the journey never had a happy ending. Oceans opened up to become graves, people turned into beasts to prey on us.

Even after surviving all that the expectation is to remain silent and disappear into a new type of slavery. Not me!

I refuse to shut up and continue to serve through 2%…I refuse to be slave anymore I risked my life to set myself free, so I will live free.

Many, including the young people of our age, who call themselves YPFDJ find the act of running away from your own country by taking extreme measures strange. They have never experienced the life the national slavery. They are surprised to see us fleeing and annoyed to hear us call our national service experience as slavery.  Now we are, simply, saying enough!

Actually, it would be strange if we didn’t (say enough!), when all you get for your hard work and sacrifice is mockery , when all your blood and sweat  is for the pleasure and enjoyment of some pretentious ‘patriot’ on their adventurous trip to Eritrea , when you are condemned to serve until God knows when without questioning a thing, when muffling the screams of despair is all you can do to relieve your indignation, when families are told to survive with 10 dollars a month, when one is only allowed to see his family once in a year or two , when the whole generation is stuck in the military and forced to give up on education, career, job , future, marriage, and family. It would be strange if you didn’t run away; risking everything. You can’t help but run away when running away is the only thing that could keep life aspirations alive.

In a world of extreme tyranny like ours, it is more than safe to assume that our years would be totally cheated off us, and we would be condemned to work and struggle for the rest of our lives without any appreciation, credit, respect or  reward of any sort. This would not have been that bad had we contributed to the prosperity of our people, the peace of our nation and anything positive that would have made our parents be proud of the sacrifice that was demanded of us.

We have had to slave for the regime with docile commitment without enjoying even the most basic of the rights of human; the right to live. Had we seen a glimpse of hope rather than our situation and that of our people deteriorate by the day, had we seen the fruits of our exploited labour take Eritrea forward, things may have been different.  But all we got was being pushed and pulled in all directions. That I now, know is what oppression does to those at the bottom of the heap.

And now that we are able to openly condemn the national slavery…people from some corners are telling us we were not slaves but veterans and unashamedly persuade the brothers and sisters we left behind to continue serving not their nation, but the interests of a regime and the elite members of the clique that continues to enslave us and condemn us to nothingness.

Like their dancing on the corpses of our fallen brothers and sisters hasn’t been enough, like taking pride for the roads and dams we built for free wasn’t enough, as though being denied basic rights isn’t sacrificing all, like gambling with our lives isn’t the ultimate low …they are telling us we should consider it an honour!

My advice to such people is to go and try to live a single day not knowing when you will be in charge of your destiny again, go a single year without knowing when you will be allowed to see your parents, go a single week knowing the screams that came from the prison cell was your best friend that  shared your bunk bed , go a single month toiling to build roads and bridges with mere pittance that others will use and enjoy as you toil endlessly and then come back and tell us how honoured you felt!

I sure am glad that God invented humour to save us all from going mad!

People who have not been through what we have been cannot tell us what we were, nor can they order us to stop condemning our own predicament of slavery. We are not inventing slavery, we are finally calling it by its name and we are saying it all loud.

This is us pouring out our frustrations…frustrations that we had only shouted through our teary eyes and running feet.

So, please do not tell me I am a veteran. Don’t you call the slavery I had been condemned to a national service, it’s quite overbearing and insulting to tell one whose fate was already decided for him; to the slave woman with inadequate payment and apart from the warmth of her family, to the young man with no future to look forward to, to her whose labour was opportunistically exploited to shut up and not to tell their story. Because this grieving heart has a story of pain, sadness and hardship that you are either ignoring or have no idea about! …We were slaves until we ran away and there are so many we left behind and some died and that is all there is to it.