Posted on March 26, 2013 by Tesfai Yitbarek in Articles 18 Comments 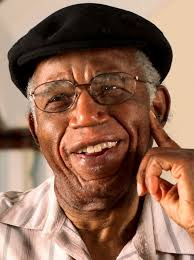 Starting in the 1950s, Achebe was central to a new Nigerian literary movement that drew on the oral traditions of Nigeria’s indigenous tribes. Although Achebe writes in English, he attempts to incorporate Igbo vocabulary and narratives. Other novels include: No Longer At Ease (1960), Arrow of God (1964), and A Man of the People (1966).

It’s almost impossible to overstate the effect of the book, which as become, in the more than 50 years since publication, the archetype for African fiction and a fountainhead for postcolonial literature. African scholar Kwame Anthony Appiah has said, “It would be impossible to say how Things Fall Apart influenced African writing. It would be like asking how Shakespeare influenced English writers or Pushkin influenced Russians.”

From the outside the Nigerian State and republic doesn’t shine like the young Achebe in the picture, but the black tar of Oil in the rivers and Delta,  South wet of Nigeria give you another impression. The Shell Oil Dutch Company is struggling to pay the damage of the Nigerian Delta. I had the luxury to sail to the Southern ports of Nigeria carrying tons of Frozen Fish. The irony that I have been confronted during those 3 years of work in the Delta area was to see Frozen fish of Mackerel and Spanish Mackerels been imported to feed the already 80 million Nigerians from foreign trawlers in front of their territorial waters, in the Gulf of Guinea, just a couple of miles from the area I mentioned  above.

Nigerians are very emotional people but due to their diversity you always notice differences in the mind setup. Some are proud of their nation but some do have resentment against the government of the day. For example if you travel from Lagos eastwards top Port Harcourt you observe a tremendous differences between the people of the two great  ports in west Africa. Workers in port Harcourt are very efficient and while in Lagos tend to be not care less. Port of Warri is another example of a character.

It is at the inland part of the River Sappele, where your sailing starts from near the offshore oil Platforms inland and pass the villages of Sappele and other villages and take a stop or two to be greeted by the River Pilots (Locals who know the river beds as though they live on them) who take ships of small size through the meanders of the river sometimes against the ebb and high tide up river. They chew their tobaccos or at times their good staff (hash) as they call it.

Back to the Laureate and the best known African writer. His books were widely read and some of them as listed below are really interesting:

Nigerian novelist Chinua Achebe redefined the way readers understood Africa in his first novel, Things Fall Apart. Published in 1958, that book … “The white man is very clever…He has put a knife on the things that held us together and we have fallen apart.”

Achebe, Chinua. “An Image of Africa: Racism in Conrad’s ‘Heart of Darkness'”

The earth seemed unearthly. We are accustomed to look upon the shackled form of a conquered monster, but there — there you could look at a thing monstrous and free. It was unearthly and the men were …. No they were not inhuman. Well, you know that was the worst of it — this suspicion of their not being inhuman. It would come slowly to one. They howled and leaped and spun and made horrid faces, but what thrilled you, was just the thought of their humanity — like yours — the thought of your remote kinship with this wild and passionate uproar. Ugly. Yes, it was ugly enough, but if you were man enough you would admit to yourself that there was in you just the faintest trace of a response to the terrible frankness of that noise, a dim suspicion of there being a meaning in it which you — you so remote from the night of first ages — could comprehend.

Herein lies the meaning of Heart of Darkness and the fascination it holds over the Western mind: “What thrilled you was just the thought of their humanity — like yours …. Ugly.” Having shown us Africa in the mass, Conrad then zeros in, half a page later, on a specific example, giving us one of his rare descriptions of an African who is not just limbs or rolling eyes:

What is the implication or the experience of Mr. Achebe give to the Contemporary African student of literature?

My experience of travel and work in Nigerian ports have done an impact on love to West Africa not for its climate and natural resources in the economic term but it diversity of ethnic and tribal societies. It doesn’t mean though there is always symbiotic co-existence but on the contrary a lot of racial tensions and even wars between the tribes. The contradictions at times gets irreconcilable to the extent of social upheaval and blood shed.

We all remember the Biafra secessionist war in the 60ties. The Nigerian-Biafran War began on 6 July 1967 and lasted until 15 January 1970. … The Igbo tried to breakaway from Nigeria to become the Republic of Biafra, …

In novel called Half of a yellow Sun: The novel takes place in Nigeria during the Nigerian-Biafran War in 1967-1970. The effect of the war is shown through the dynamic relationships of four people’s lives ranging from high-ranking political figures, a professor, a British citizen, and a houseboy. After the British left Nigeria, the lives of the main characters drastically changed and were torn apart by the ensuing civil war and decisions in their personal life.

Jumping four years ahead, trouble is brewing between the Hausa and the Igbo people and hundreds of people die in the massacres, including Olanna’s beloved auntie and uncle. A new republic, called Biafra, is created by the Igbo. As a result of the conflict, Olanna, Odenigbo, their daughter Baby and Ugwu are forced to flee Nsukka, which is the university town and the major intellectual hub of the new nation. They finally end up in the refugee town of Umuahia, where they suffer as a result of food shortages and the constant air raids and paranoid atmosphere. There are also allusions to a conflict between Olanna and Kainene, Richard and Kainene and Olanna and Odenigbo.