USE: The United States of Eritrea

Posted on November 28, 2016 by Ahmeddin Osman in Articles 205 Comments 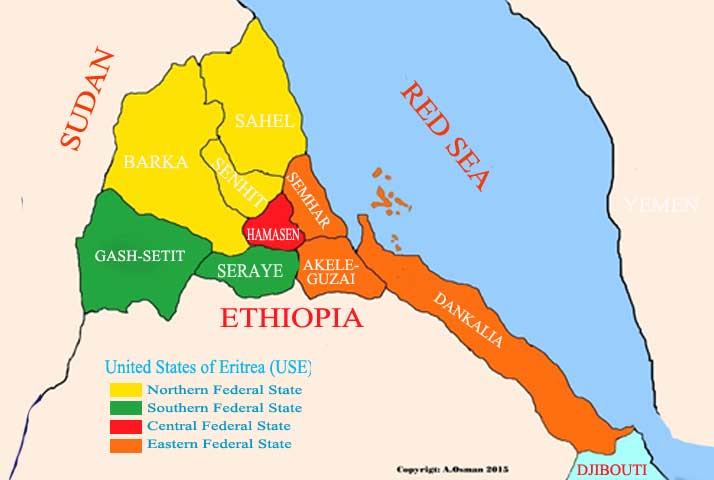 Currently Eritrea is ruled by an undemocratic regime that, can’t be reformed, continues to violate basic human rights, and is unable to provide even bare necessities for most its citizens. And it has been condemned by human right organisations and the United Nations. Dwelling on that however, does not help. Instead, I would rather focus on planning for the aftermath of the fall of the regime, for the future of the United States of Eritrea that works for all, not just for one group or another.

It seems to me, most prominent opposition groups are, overall, influenced by ex ELF and PFDJ leaders, might want to replace the current dictatorship with a tyranny of the majority in the name of democracy. Their political programs, albeit proposing a commitment to democracy and rule of law, do not clearly address crucial issues that now divide Eritreans and re more likely to continue threatening our peace, security and unity after the fall of the current regime. The opposition must urgently address how it would share power with those they describe as minorities, nationalists, separatists, regionalists, and Islamists in the future.  We must know now, how decisions would be made on issues that most matter to many of us such as addressing land and property distribution, question of nationalities, regional disparities, businesses and investment, official and working languages, power-sharing, position on universal human rights and freedoms, education, and languages policies. We must refuse to merely accept replacing the current ‘tyrannical regime’ by the ‘tyranny of the majority’, even if we are told some powers would be delegated to the local and regional governments–we know that those powers can also be taken away at will.

If we look around in Africa and in the Middle East, the system of government is based on giving all the powers to a single winning party which imposes a harsh reality in which minority parties would never have a chance of being in government. Very often, a ‘tyranny of the majority’ leads to a highly centralized political, social and economic system that serves the interests of the majority. And that in turn leads to the marginalization of minority groups and parties.

In a diverse country, such as Eritrea, where religious, regional and ethnic persecution is apparent, having a simple majority rule would always threaten peace and stability of the nation. It would certainly lead to a cycle of violence, political chaos, civil unrest, and continuation of violation of universal human rights and freedoms in the name of establishing unity and security. It would also threaten the dream of nation building and risk creating another failed state.

What are the options for the future Eritrea?

This article will attempt to address, in part, issues of languages, education system, power sharing and government system.

Today in Eritrea there is an explicit PFDJ and implicit opposition groups’ ideology of linguistic assimilation which dictates that everyone must learn and use Tigrinia, which has become a dominant language on the expense of all other languages. This cannot carry on. There must be a policy that encourages linguistic pluralism. All citizens of Eritrea must be expected to be proficient in Arabic, Tigrinia and English, as well as in their respective nationality languages. The future democratic governments must be prepared to provide the human and physical resources that are needed to promote multilingualism. The pluralistic linguistic policy should aim to promote better understanding between the ethnic groups, in line with the efforts of nation building, and a recognition and support of co-existence of multiple languages within the society.

At a primary school level, a child should have a right to choose Arabic or Tigrinia as a language of learning (medium of instruction) while English should be taught as a compulsory examinable subject and at the same time nationality languages would also be offered in classes. Children must be encouraged to have a good grasp of their nationality languages.  Where it is not feasible to teach some nationality languages in some geographical areas due to existence of small number of children in that area, the government must fund alternative community schools and classes so that children do not miss out from learning their own nationality languages.

At a secondary level and beyond, English language should be the medium of learning and instruction of all subjects, while Arabic and Tigrinia remain as compulsory examinable languages. Secondary schools should also continue offering nationality languages as described above.

2- Type of Government and democratic systems

History and experience illustrates what would happen if power is handed over to the central government, to the single winning party or group. What is needed is a system that limits powers conferred to a central national government; what Eritrea needs is a system that delegates constitutionally guaranteed separate powers to regional state governments.

The type of government system that has been proved to be relatively successful in a diverse country is a federal government system. It is used successfully in the most diverse nations on earth including in one of the largest democracy of the word, India. It is also used in multi-ethnic nations such as Belgium, South Africa, Canada, Nigeria, Ethiopia, and Switzerland.

A constitution in a federal system limits activities of national government to a few areas such as: regulating internal trade, foreign relations, creating a currency, national defence, Immigration … etc. While at the same time, a federal state would have the power to control activities such as: establishing local government, drafting state constitution, administering land and other resources, education, conducting elections, providing welfare, and maintaining police forces, etc.

3- What type of Federal system in Eritrea?

Most federal systems in the world are based on geographical division of, territories, language, or ethnicity. Creating a federal system in Eritrea along ethnic lines, as advocated by some ethnic based groups, is not practical or achievable. It’s also too complex. Firstly, the reality is, most regions in Eritrea have been inhabited by mixed ethnicities for generations.  Secondly, not every group clearly wants to define itself along ethnic lines as its primary identity. For example, my experience is that most Jeberti activists primarily prefer to distinguish themselves based on culture and religion, significant activists from other communities prefer to be distinguished by regional identity such as lowlanders, Akeleguzai, Hamasen and Seraye; while most Afar, Saho, Blen, and Kunama prefer to be identified along ethnic and linguistic lines. Furthermore, people’s identity and ethnicity is not rigid; it is flexible and loose.  Therefore, attempting to create a federal system in Eritrea based on ethnicity would lead to internal conflicts between different ethnic groups within each state, as well as between borderlines of most federal states.

The most realistic federal system that can be achievable in Eritrea, in my view, is a system which is based on amalgamation of a well-known regional administration. Prior to changing the regional administration boundaries by the current regime, Eritrea was divided into administrative regions: Akeleguzai, Seraye, Gash, Barka, Dankalia, Hamsen, Sahel, Semhar, and Senhit. A federal system that can be implemented in Eritrea without too much complication can be achieved by combining the regional administration into 4 Federal states. The four federal states should be relatively balanced in terms of population, resources, size, and geography. Importantly, the fear of continuous domination of one ethnic, religion, or regional group, would be minimized. Those nationalities who still look for self-determination would still be able to negotiate within their federal states, the extent of their self-rule within their own regional administrations.  In this case, Eritrea would be divided into four Federal States, as shown in the map above, making it a United States of Eritrea, U.S.E.:

For a federal system to work, it must be backed by a genuine, fair, and free democratic voting system. For example, the attempt made by the Ethiopian EPRDF system to accommodate ethnic diversity without corresponding process of democratization is a complete fiasco. The reason why the EPRDF won all parliament seats in 2016 is because it lacks a commitment to power-sharing due to its poor democratic culture and by taking a full advantage of a plurality voting system. That is a system in which each voter can vote for only one candidate, and the candidate who polls more votes is elected. This is also called “Winner-takes-all”. In such a system, minority party candidates would have no chance of winning seats. Alternatively, a proportional representation (PR) characterizes electoral systems by which divisions in an electorate are reflected proportionately in the elected body. If 30% of the electorate support a particular political party, then roughly 30% of seats will be won by that party. The essence of such systems is that all votes contribute to the result: not just a plurality, or a bare majority, of them. These would lead to a genuine power-sharing on all levels.