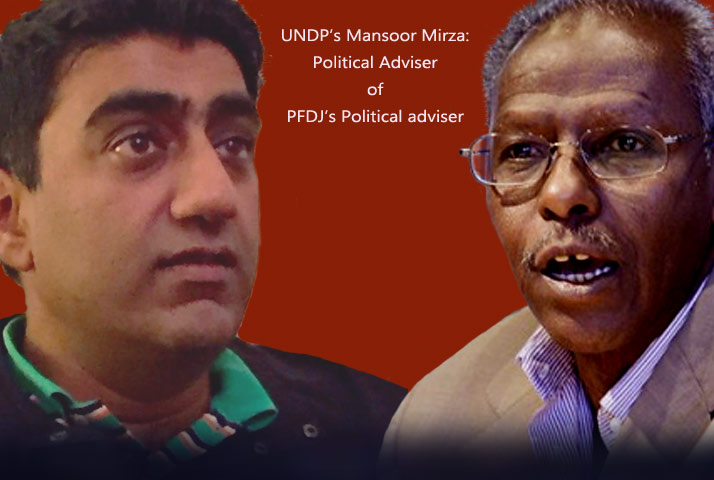 According to the sources, UNDP’s Mansoor Mirza is lobbying on behalf of the Eritrean ruling party and advising it on tactics to circumvent possible UN decisions as a result of the findings of the UN Commission of Inquiry on Eritrea (COIE).

Asked about the UNDP, Elsa Chyrum, an Eritrean human rights activist explained that the primary mandate of the UNDP in Eritrea is “Development, not Human Right [which] should be dealt by the Office of the United Nations High Commissioner for Human Rights (OHCHR), the Human Right Council (HRC) and the General Assembly.”

A diplomat who attended a meeting held last June in Geneva told Gedab News, “in the meeting, Mansoor cast doubt on the findings of UN entities about human rights violations in Eritrea.” He added, “the man undermines the work of his colleagues at the UN and is disloyal to the UN that employs him.”

This week, the UNDP employee is scheduled to appear in New York at a side meeting organized by the Eritrean ruling party. The goal of the meeting is to promote the position of the Eritrean government regarding the many UN accusations, including the unimplemented recommendations of the first and fourth UPR recommendations.

Elsa Chyrum, an Eritrean Activist said, “there is no pressure to implement the [UPR] recommendations, and they are not held accountable … rogue states like the one in Eritrea uses the UPR process to prolong its absolute power while the citizens continue suffering.”

The Eritrean government has refused to co-operate with UN mandate holders, including the Special Rapporteur and the Commission of Inquiry.

Meanwhile, Eritreans residing in the USA are preparing for a demonstration in New York that will be held on Thursday, October 27 in support of the report that was issued by the UN Commission of Inquiry on Eritrea (COiE). Thousands of Eritreans and their friends are expected to join the demonstration.

On the same day, Ms. Sheila Keetharuth, the Special Rapporteur for Eritrea, will present a verbal statement to the third committee of the General Assembly on behalf of the COIE. The COIE issued its findings last June. It was mandated to investigate human rights and other crimes committed in Eritrea, to see if the findings would warrant referring the cases to the International Criminal Court.