Posted on January 15, 2018 by Yohannes Zerai in Reflections 100 Comments 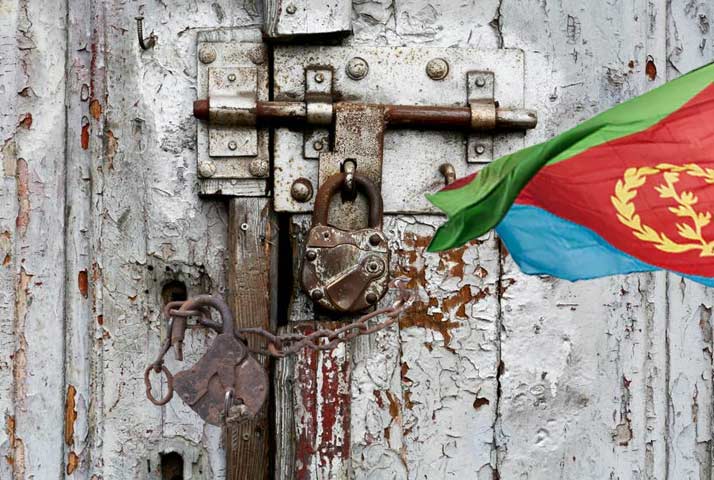 Following its annual review of Eritrea sanctions in place since 2009, the UN Security Council (SC) announced on November 14, 2017, its decision to renew the measures for another year. Supported by all but four abstaining Council members, the decision was similar to those of the past seven years in the degree of consensus it represented. But this year’s review process seemed to differ from previous ones in the level of expectation it had aroused among supporters of the Eritrean government.

In the run-up to past annual reviews, pro-regime activists abroad mounted campaigns that projected optimistic scenarios of an assured lifting of sanctions to be made possible by the expected acquiescence of the US. This unmitigated optimism – if at all genuine – reflected false hopes generated by political shenanigans that the regime devised to give the impression that it was making a successful effort toward resolving the sanctions crisis.

In contrast, sentiments around this year’s event were subdued and the review process ran its course and issued its decision seemingly without attracting much public attention. These observations suggest that even the staunchest regime supporters are growing anxious about the way the regime has been handling the sanctions issue. They see that in eight years of sanctions, the regime has not brought itself to abide by the rules of the UN verification process much less to comply with the provisions of the sanctions resolutions. Consequently, a growing number of Eritreans fear that the country may be fated to suffer debilitating sanctions for much longer.

Pursuing objectives dictated by his ego more than by the country’s national interests, President Isaias Afewerki and his regime walked into the quagmire of international sanctions recklessly and nonchalantly. And while the country suffers the punishing provisions of the sanctions, the president continues to engage in brinkmanship dedicating himself to actions and behavior that exacerbate rather than rectifying problems.

A Sure Way to Provoke Sanctions

Years of foreign adventurism by the PFDJ government had become increasingly irksome to some Western and African countries. But it was the bizarre behavior the regime displayed following its border conflict with Djibouti in June 2008 that put it on a collision course with the international community. After the clash, Djibouti promptly appealed to the UNSC for intervention claiming penetration into its territory by Eritrean forces. It allowed visits by fact-finding missions from the UN, AU and the Arab League and withdrew its forces to pre-June 10, 2008 positions. In contrast, Eritrean authorities took a rejectionist stance amid their staunch claim of having “no problems with Djibouti”!

The diplomatic brouhaha that surrounded the event generated a stream of appeals, admonishments, criticisms, warnings, and threats from friend and foe alike – mostly meant to prod the regime into cooperating with potential peace partners in addressing the crisis. Notable among these were the initiatives of two friendly nations which invited President Isaias to their capitals for consultation in attempts to avert punitive measures against the country. At the behest of the U.S., Egypt’s Hosni Mubarak tried to impress on the president that sanctions were inevitable unless he cooperated with the UN. Likewise, speaking from experience, the late Muammar Gaddafi warned him that while a country can easily find itself subject to sanctions, getting such measures lifted is a daunting task that may take years to accomplish.

Unfortunately, not only did these friendly entreaties fall on deaf ears but, reportedly, provoked the president’s indignation against the leaders for daring to give him advice. In the months that

followed, he grew even more defiant declaring that Eritrea “has moral obligation to stand with the brotherly people of Somalia” against foreign intervention. Worse, he continued to deny his entanglement in a border dispute with Djibouti. These inescapably led to UNSC imposing sanctions on Eritrea in December 2009 and tightening them in June 2011.

In their ensuing contention with the UN, Eritrean authorities have pursued a self-serving strategy of misrepresenting the SC sanctions resolution as simply demanding that the regime: (i) end assistance to Al-Shabaab and (ii) accept mediation for its border dispute with Djibouti. They tie this to the Somalia-Eritrea Monitoring Group (SEMG) finding of “no evidence of Eritrea’s support to Al-Shabaab in the last four years” and to Qatar’s mediation of the border conflict. And they argue there no longer exist justifications for the sanctions which must, therefore, be lifted.

In truth, a key article in SC resolution 1907 (2009) demands that “… Eritrea, cease arming, training, and equipping armed groups and their members including Al-Shabaab, that aim to destabilize the region or incite violence and civil strife in Djibouti.” It is therefore evident that the support the Eritrean regime has been giving to a host of armed rebels arrayed against Ethiopia and Djibouti constitutes serious violations of the sanctions resolution. As for Qatar’s mediation effort, it is known that the process plodded along fruitlessly for eight years before it collapsed in mid-2017 when Qatar abruptly announced its departure and pulled its peacekeeping troops from the border zone. The regime has yet to meet any of the crucial demands of  SC resolution 1846 (2008) “that Eritrea … engage actively in dialogue to defuse the tension and engage also in diplomatic efforts leading to a mutually acceptable settlement of the border issue; abide by its international obligations … [and] cooperate fully with the good offices of the Secretary-General …”

Government Handling of the Sanctions

From the outset, the SC sanctions resolutions had met with the regime’s denial and hostility. In a clear display of defiance, the government mobilized its supporters globally to stage public protests against the “illegal and unjust” UN sanctions. On the other hand, its officials severely restricted engagement with the SEMG barring cooperation with UN monitoring and verification mechanisms and refusing to respond to requests for information. Furthermore, since 2011, the regime has refused to allow the Group to conduct mandated annual visits. In contrast to its antagonistic stance against the SC, however, the regime has duplicitously courted the favors of selected members and attempted to “buy off” Russia’s and later China’s vote for lifting the sanctions. But all it was able to garner from these powers was just abstentions.

Eritrean government’s record of compliance with the sanctions regime has been equally deficient. UN sanctions-monitoring instruments have established over the last few years that the regime obtained military-related external support from sources in Asia and eastern/western Europe. The support (which included training, repair/maintenance, equipment, spare parts, etc.) is known to violate the terms of the UN-imposed arms embargo.

‘Who Will Blink First?’

Smart handling of the UN sanctions regime would require drawing on the hard lessons of similar experiences of other countries. Libya, for instance, was a target of sanctions by the UN (for 11 years) and the U.S. (for nearly three decades) purportedly for engaging in terrorism and development of weapons of mass destruction. The measures had plunged the country into severe economic and political crises; so, in 2003, Muammar Gaddafi took the bold step of initiating negotiations with his principal antagonists thereby bringing an end to sanctions. But, not before Libya had met all demands of the sanctions regimes! Similarly, Sudan succeeded last year in persuading the U.S. to lift financial and trade sanctions that it had imposed on the country for 20 years. This was achieved through sustained diplomatic effort that offered concessions, bilateral cooperation and policy reforms.

If these experiences are any guide, the veto-wielding members of the UNSC seem not inclined to lift sanctions until they see a “white flag raised!” That much was also implied by the UK representative at the 2015 sanctions-review session: “The text couldn’t be clearer on what Eritrea must do.” he declared speaking for the Council, “Eritrea is master of its own destiny.”

The Security Council also appears intent on ensuring the government’s violations and defiant behavior do not go unanswered: A proposal of developing a roadmap that China advanced in the 2016 review session for a phased lifting of the Eritrea sanctions was dropped shortly thereafter without any consideration. More significantly, the SC toughened the wording of its latest resolution signaling no easing of sanctions until the regime mends its ways. This prompted the Russian representative to complain after the voting that “The text this year had not improved, but had worsened”

It takes political courage to accept responsibility for actions that lead to a sanctions quagmire and foresight to cut one’s losses and make a quick exit from resulting political crises. But all President Isaias has to offer are arrogance and a false sense of invincibility which render him geopolitically irrelevant and force him to ultimately surrender to the dictates of others. During the 1998-2000 Ethio-Eritrea war and its aftermath, we saw him time and again rejecting equitable, mediated peace deals only to humiliatingly accept a few months later hugely unfavorable terms dictated by his adversaries!

One can bet that the president will not change course and resolve to address the underlying causes of the sanctions through cooperation and negotiation with the international community and by letting his people have a say on the matter. But even in the unlikely event he does, his actions and behavior thus far have destroyed any prospects that his belated capitulation would earn him any credit from the international community or his own people. Either way, the UN sanctions have become a political albatross around the president’s neck; and they will undoubtedly be a major factor in bringing about his ultimate demise.