Posted on May 2, 2016 by Yohannes Zerai in Reflections 60 Comments 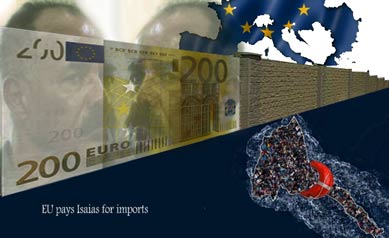 An article that this writer posted at Awate in March had pondered the question of what may have been the real reason(s) that impelled the EU to re-engage the Eritrean government and provide it with a sizeable aid package early this year. To be sure, EU’s official statements of the time had claimed that the funding was prompted by the need to stem the flow of Eritrean asylum seekers to Europe.[1] But it was evident from the outset that this claim carried little credibility and was put out merely for public relations purpose.

On the other hand, events and circumstances surrounding the case suggested that the funding was, in fact, motivated by far weighty political and economic objectives. This two-part series attempts to shed some light on the nature of these veiled objectives by considering the totality of indicative factors, incidents, linkages and cause-and-effect relations relevant to the case. The first part focuses on political objectives that seem to be guiding Europe’s current policy towards Eritrea; the second part will examine recent European initiatives in order to gain insight into the economic objectives of that policy.

A brief review of Eritrea’s early relationships with European countries provides an essential backdrop to the discussion on the latter’s political objectives. Early Eritro-European relations were marked by alternating periods of cooperation and confrontation, hence were contentious at best. Several European countries initiated bilateral relations with Eritrea when it gained de facto independence in 1991 and supported the Recovery and Reconstruction Project Initiative (RRPI) for Eritrea. Much of this initial support later transitioned to bilateral/sectoral development assistance following the country’s formal independence two years later.[2]

Relations began to deteriorate, however, in 2001 as a result of government crackdown on political dissenters, closure of the independent press, and curtailment of civil liberties. These measures and attendant reversal of political and economic liberalization soured Eritrea-Europe relations and hampered development cooperation. Donor support for social and agricultural development projects was scaled down or ended altogether by donor decisions or at the insistence of the government.

The decline in international cooperation reached a new low when the regime issued the 2005 NGO proclamation. The declaration drastically reduced the number that could register legally, hence imposed severe restrictions on NGO-mediated implementation of donor projects.[2][3] By 2007, bilateral development agencies had either decided, or were ordered by the government, to leave the country. As the final act in its break up with Europe, the Eritrean government terminated its development cooperation with the EU in 2011.[4]

An inevitable consequence of Eritrea’s falling-out with the EU was the need for both parties to redefine their policies towards each other. Embittered by UN-imposed sanctions and the failure of the international community to enforce its own ruling on the country’s border dispute with Ethiopia, the Eritrean government adopted an increasingly hostile stance towards the U.S. and the West in general. Bashing the U.S. for its “hegemonic and exploitative agenda“ became an enduring staple not only of its official pronouncements, but also of the state-controlled media.

A truth that seems lost on Eritrea’s leadership is that, to deal with adversaries from a position of strength, a government must be capable of playing a key geopolitical role at least in its region. This means, among other things, building a strong economy, championing democratic principles and the rule of law and crafting a foreign policy that promotes international cooperation while fostering Third World solidarity. But realities in Eritrea are to the contrary: the autocratic regime finds itself reeling from UN sanctions and indictments, an ailing economy and debilitating international isolation. Thus, its incessant diatribe against “Western conspiracy” is buttressed neither by economic power nor by political influence, hence is nothing more than empty rhetoric.

To the EU, on the other hand, the falling-out must have meant that its long-term agenda of gaining influence over the country and control over its natural resources was in jeopardy. So, while the Eritrean government was preoccupied with blaming the world for almost anything and everything, the EU was honing its new strategy for Eritrea. The outcome of that effort is a policy that seems to have the goal of subduing the belligerent regime and bringing the country into the fold of client-states that have accepted existence under the dominance of Western powers.

At the center of the EU’s new strategy seems to be a scheme to disabuse the government of the arrogant, self-righteous notion of itself as: (i) champion of the principle of self-reliance and (ii) role model for the developing world on resisting Western hegemony and exploitation. And so, seizing on the regime’s desperation for relief from economic straights and exit from political/diplomatic isolation, the EU cunningly announced its intent to re-engage the regime and provide it with a generous aid package.[1][5]

In effect, the strategy involved dangling the promise of political engagement and development assistance in front of the regime and make its leaders “crawl on their knees” to get it. And crawl they did! For months, the president’s special advisor, Mr. Yemane Gebreab made it his sacred duty to conduct repeated tours of European capitals hat in hand begging for their largesse. He shamelessly offered to help stop Eritrean refugees from reaching Europe if only the regime could be compensated for its services! In their zeal to get in the good graces of European powers, regime officials demeaned themselves by lying through their teeth that they will “carry out democratic reforms in our own way during the next three to five years” and that the National Service will be “restored to its original 18-month term.”[5]

By all accounts, the aid package was a fait accompli even when it was first announced as a plan.[6] Yet, as if to maximize the political returns of the initiative, the EU let the approval process drag on for nearly a year keeping alive the controversy over the proposed aid. Having successfully enticed, cajoled and coaxed the Eritrean government into capitulation, the EU awarded in January 2016 the prize that was so coveted by the leaders of the regime.

Does the demeaning role that the Eritrean government played in this funding saga herald its surrender to Europe’s diktat and patronage? Or was this one of the regime’s habitual exercises in deception? Bamboozle the EU by false promises of reform, and revert to your old belligerent self once you got what you wanted! Whichever approach it may be banking on as a strategy, the regime will not be spared the inevitable fate of being relegated to a dark chapter in Eritrea’s history.

As for the EU, its decision of granting undeserved rewards to the regime was hardly intended to promote democracy or ensure respect for human rights in the country. Neither was it prompted by a conviction that the regime is willing or able to stop the exodus of refugees out of the country. The real, but unspoken objective of Europe’s recent political maneuvers is one of setting the stage for eventual imperialistic domination and exploitation of the country by the West, pure and simple!