Posted on September 2, 2015 by Abdulkader O. Ali in Articles 1 Comment 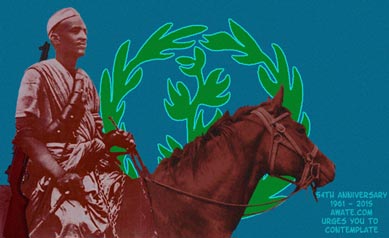 Awate the initiator, Awate the continuation, congratulation!
Awate, the man who gave birth to a nation
Awate, the website which inspired the population
Awate, two heroes, the same gene, the same strain
Awate, the Founder shot first from his old “Brein”
Awate, on the web roared like a lion once again
Awates, stood fast and held the torch aflame
This and the original Awate are just the same

Awate, the embryo, the thought, the reason
Awate, the man who crafted a beautiful nation
Awate, his namesake, the website with clear vision
Awate, the struggle, the disciples in the noble mission
Awate, the beginning awaiting a touch for completion
Awate, whose dream is begging us its culmination
Awate on the web is fulfilling it with determination

Awate, our clarion clear voice with no hesitation
Awate, empowerment, entertainment and education
Awate, declares it again no to slavery and exclusion
Awate says it again no hegemony and marginalization
Awate, heroism and valour in perpetual progression

Awate, who chose freedom and rejected submission
Awate, who set our victorious train in motion
Awate, embolden, sharpen your pen and shoot with precision
Awate, carry the burden, a heavy legacy, a glorious mission!