A Window To Eritrean Music And Dance 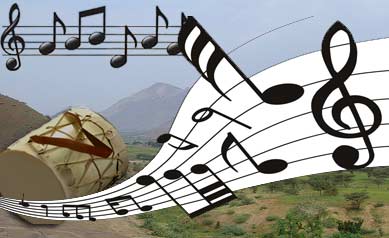 A large portion of Eritreans speak Tigrayet in diverse dialects in the area stretching from the bay of Zula/Afta all the way to the Eritrean-Ethiopian-Sudanese border area of UmHajer and its environs. Tigrayet speakers reside in Samhar, Sahel, Barka and parts of Hamasien, Senhit and Gash regions. There are also some isolated Tigrayet speaking communities in Akele-Guzay and Seraye who have assimilated within the surrounding communities of Tigrinya speakers.

Due to their geographic stretch Tigrayet speaking communities have contacts with almost all of the nationalities in Eritrea, some of whom have adopted Tigrayet as a second language. Almost all of Blin, Hidareb and Nara speak Tigrayet fluently; the rest of Eritreans who have contacts with Tigrayet speakers also speak the language satisfactorily. Therefore, in traditional Eritrea, Tigrayet could be thought of as a gluing factor of Eritrean societies. However, although no statistics is available, Tigrinya seems to be taking over that role of Tigrayet in Eritrea due to its use as an administrative language all over the country.

Traditional Tigrayet speakers used to be agro-pastoralists, most prominently the of transhumanemployeess practice known in their language as sebbik w’saagim (ስብክ ወ ስግም). This is in contrast to a nomadic life. Nonetheless, due to war and drought, they have recently been adopting sedentary living. Also of note is the fact that like most Eritrean communities, they have long established urban lifestyles and became merchants, factory workers, fishermen, civil servants, etc.

A non-academic look at Tigrayet speakers, based on my observations while I roamed those regions during the liberation struggle, would reveal five regions with their own distinct characteristics, folklore, dances, dialects, and oral traditions relevant to that particular area’s history, and other nuances which make those regions distinct. They are Mensa’e, including the Semhar plains north of Ad-Shuma, and including the northern Northern Red Sea escarpments starting from Sogo all the way to the end of that escarpment at or around Afabet; Massawa, Hirgigo, Afta-Zula and environs; Sahel, Marya–both TsaEda (red*) and Tsellam (black), and Gash-Barka.

Some factors like music, dances and dialects may cross over the faint boundaries between adjacent Tigrayet speaking communities and other neighbor nationalities which come in contact with them. They overlap in some places. Importantly, the social delineation– both among the Tigrayet speakers themselves and between them and other neighboring communities–is so fluid and blurry that one could walk from Habero in Sahel to Keren in Senhit without noticing they are in Blin land (a different nationality). Correspondingly, one would find it hard to differentiate Tigrayet speakers of the Mensa’e and Betjuk, from Blin in the areas of contact where they intermingle and live peacefully. By far, Tigrayet has been the language of communication between many ethnic groups.

Furthermore, before the Eritrean revolution, Tigrinya, though the language with the greatest number of speakers, was limited in Highland Eritrea. At the same time, Tigrayet held its grip in all Lowland Eritrea including its major cities, making it the biggest lingua-franca covering most of the Eritrean map. With the launching of the armed struggle, since the rural land of Tigrayet speakers was the staging region of the revolution and where most of the atrocious battles raged for decades, Tigrinya was introduced to it by the freedom fighters who depended on the people for their survival. Thus, nowadays, Tigrinya is not foreign to most rural Eritreans including Tigrayet speakers since the the EPLF used of Tigriyna as an administrative language during the struggle. Currently the government uses Tigrinya in the same manner.

Tigrayet Music is pentatonic, songs and vocal voicing are expressed in five notes, as opposed to classical music which could use all the seven notes and their fractions. Both major and minor forms of the pentatonic scale are used.

Kebero (Drum): A cylinder covered tightly by tow skin-membrane on both ends tightly stretched, usually held in the armpit, and drummed by both palms.

Ender (flute or recorder): Made from bamboo reeds or metal pipe.

Harmonica: Usually introduced at the end-segment of the dance or song. Similar to Highland Kuda dance, the Tigrayet dance, known as SaSaEit or Kskes, is brought to its climax and resolution at the end of the dance. This closing part of the dance is known as sbr/ስብር, which is the cream of the dance. The beat and the change in the rhythmic movement gets picked up resolving to a conclusion. Here is the queen of sbr, the harmonica, introduced by a raised voice of the lead singer to fill in as a solo instrument ending the dance. Unlike western music, the harmonica is used to accompany the changed beat of the closing segment, and it doesn’t go farther than two-three chordal voices. However, it gives the sbr part of the dance color and intensity. This type of dance is shared with Blin people too.

Rababa: A five-stringed harp with each string assigned to one of the five notes. Tigrayet music is made of five notes (the music is pentatonic), the Rababa is mostly used in Marya Tselam and Gash/Barka. In those areas, it’s the reigning queen of the Tigrayet folkloric songs. Rababa, although constrained from expressing wide tonal ranges, its users employ techniques such as pulling off or hammering the strings, and letting two strings go in order to create a simple harmony. When played by a talented person, it’s the soul of traditional music of the people.

Kskes: a circular motion to a metronomic beat, close to a standard reggae beat. Dancers turn roles in groups, while others perform the singing, and filling the percussive role. It’s arranged in a circular form where dancers are surrounded by the singing and accompanying group.

Shelil: Is the braided hair of females, the dance consists of a group of renowned beauties who hit the floor in a show of fashion. It’s literally the dance of the hair. In this dance, the head is swiftly turned left and right in a rhythmic move with whirling hair sweeping the face in harmony with the movement of the rest of the body. The accompanying group sit or stand in a circular formation. Shelil songs are play lyrics that reward the female dancers with adoring expressions of the girls beauty, stamina and skills.

Berj/Mirgidi: This is usually a manes dance in wedding parties, it consists of a drummer, a lead singer, and a chorus. Dancers may change/exchange positions in a frontal or circular motion; it is a dance that requires energy and demanding physical agility; it includes jumping and stomping the ground. Lip-whistling to the beat is part of the dance.

Degdeg/asomya: This type of dance is the most complex and choreographically elaborate. It has many varieties and regional distinction. The most complex Degdeg dances have a myriad of intricate steps which I saw in Marya Tselam. It took months for the choreographers of the EPLF central musical group to master just few Degdeg dances which follow elaborate patterns. The dancers turn and twists along the way, mostly to impress the females. It’s probably a dance of young males to show their skills and attract females. Here, the females are the main singers, and the dance could be considered an opposite of shelil where the males try to lure the female dancers by showering them with tempting and suggestive lyrics.

Goyla: Mainly danced in the Mensa’e and Blin area, where males are coupled with females, and follow a lead singer. The dance is done with the males holding the females securely, and is identified by the intermittent jumping. This dance is a sort of courtship where during the dance, the females attempt to break loose from their male partners and fall on to the ground in order to embarrass them while the males should prevent the fall by staying on guard while they dance.

The above are the major dances I could think of. There are many other dances and songs, some of which have religious connections and connotations, conducted on special occasions, such as the death of a king, a notable or famous figure, the birth of a child, the death of a husband (conducted by the widow), war and peace, etc.

I will present more of that in the future starting with my next article on Tigrayet song writing and songs with a special focus on the renowned Eritrean artist Ustaz Alamin Abdulatif.