Statement: Network of Eritreans for Democracy, Justice and Equality (EDJE) 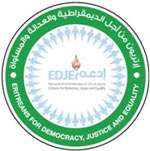 Statement by the Network of Eritreans for Democracy, Justice and Equality (EDJE) on the decision of the ENCDC Council’s leadership dismissing the Secretary of the Executive Committee

The ENCDC represented a qualitative development in the Eritrean struggle and it motivated national forces to promote the national interests of the people. The decade long process to upgrade the of struggle culminated convening the National Congress for Democratic Change in 2011. In that convention, the National Council, a broader and more sophisticated coalition compared to its precursors was established and it provided the struggle with more capacity to manage and mobilize resources by embracing most of the political organizations and civil societies and independent personalities under its umbrella. It also increased the potential for more effective struggle to achieve a democratic change by removing the dictatorial regime and rectifying its catastrophic sectarian and chauvinist policies and practices.

Unfortunately, though our people pinned high hopes on the National Council, its leadership failed in achieving the objectives of the Conference and accomplishing the tasks entrusted to it. This fact has been elaborated in several assessment reports that EDJE issued with the aim of enabling all concerned to properly diagnose the problems and identify weaknesses so that we can all work to rectify the matter before it was too late. Alas, our calls were not heeded similar to many appeals expressed in Paltalk rooms and by writers in different websites.

EDJE summarizes the main reasons for the failures as follows:
1. Lack of qualified and efficient leadership,
2. Absence of institutionalism and lack of commitment to abide by the regulations and work according to the set programs,
3. Failure to separate powers within the Council; that caused interference and overlapping of assigned tasks and responsibilities,
4. Undemocratic work tradition and practice,
5. Lack of transparency and accountability and absence of collective leadership in executing daily duties.

Due to absence of institutionalized approach and practice, spontaneity and individualism prevailed in the Council’s activities. Also, the overlapping of tasks and responsibilities led to discrepancies, disputes and conflicts about the nature and limits of responsibilities. In turn, that resulted in power rivalry and the ensuing confusion stalled the work finally bringing the operations to a complete stagnation–a feature that characterized the whole work period of the Council.

The current crisis, which revolves around the legality of the decision taken by the chairman of the National Council to dismiss the Chairman of the Executive Office, and the debate raging around it, is only a reflection of the deteriorating reality and the depth of the crisis that has reigned for so long. This is in fact nothing more than a clear manifestation of the accumulated errors and failures that have slowly eroded the bases and weakened the structure of the Council. If not rescued quickly, that will inevitably damage the supporting pillars of the whole structure of the Council, eventually causing its total disintegration. Therefore, we call upon all concerned to pay attention to the imminent danger facing the ENCDC and to take responsibility in preserving what has so far been achieved. We appeal to all concerned to overcome the difficulties and safeguard the Council’s establishment and improve it further by preparing properly for the convening a successful national congress.

Since we do not expect any meaningful work to be accomplished during the remaining life of the Council, we call upon all stakeholders to strive to form an efficient and competent preparatory committee, with balanced and inclusive representation, where political organizations and civil societies and other stakeholder would participate in satisfactory proportions. With that we hope to attain a better outcome than the last time, in order to make up for the wasted time and effort, since the previous Congress. We urge all concerned to put the Eritrean struggle back on the right track to achieve the goal of getting rid of the dictatorial regime, including all forms of oppression and tyranny without delay so that Eritreans can establish a government based on democracy, justice and equality.

Long live the just struggle of our people for freedom and decent life
Glory and eternity for the memory of our martyrs
Shame and disgrace upon the ruling junta and its dictatorial regime.