Terrerti And Their MP Aunts 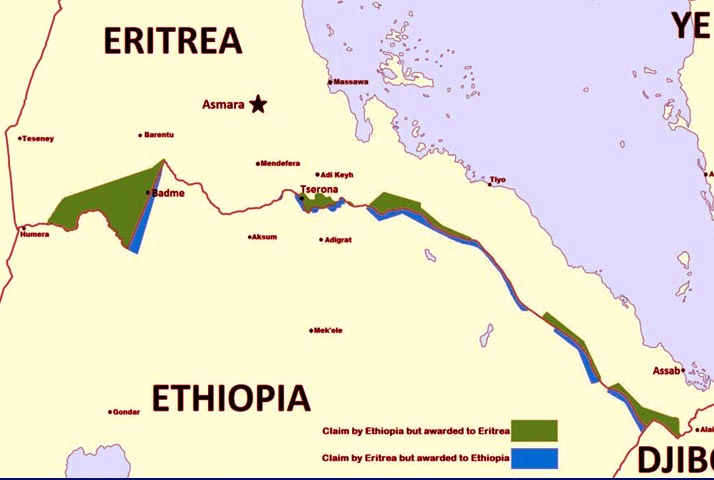 I keep thinking of my aunt because some people call home, talk to their aunties and use them as proof that their single voice is the voice of the people: whatever they tell them is their proof of what the people are saying, and they begin their sentence with “hzbi entay ybl alo mesleka…”  In the absence of a representative government and a free press, the aunt, the uncle, the friend, that sole person people talk to in Eritrea, becomes amplified into the voice of a member of parliament, an MP, the Baito, indeed the voice of the people.

Let me tell you about my aunt.  An exceptionally brave woman, she is a self-trained midwife whose tools included sharp Nacet shaving blades, clean gauze cloth and a heart of steel. She has fourteen children, some of whom she mid-wifed their birth alone, on herself.  Her wit is the talk of everyone: often, she proudly reminds her visitors that she has raised more children than a football team. She shares everything except one secret: where she hides her fountain of youth [Now deceased and I miss her]. Had she been a political junkie, she would certainly assemble enough people to form a “formidable” political movement. At the very least, she would have had a group composed of fifteen people, which would have made her party bigger than some of our self-mid-wifing and tiny parties.

Three years ago, at a meeting, a speaker stood behind the podium and started blowing a fiery speech: “kbur hzbi ertra!” he began, addressing the twenty-something people. The “hzbi ertra” were listening attentively; I should know: I was one of the hzbi. The speaker assured us that our being there in the hall is a testimony that “hzbi ertra nhgdef kewdqa telaIlu’lo“. I agreed with the sentiments. Back then, “enda Isaias” was so big and controlled all aspects of the Eritrean community life, it was choking it.

Prior to 2001, assembling that many Diaspora “hzbi” was quite a feat. Demoralized, tired and after giving up hope, many members of the opposition were dropping out of the whole journey.  Only the few stubborn individuals and organizations persistently carried on. They were insulted, defamed and humiliated. They were called ‘laHasti byati weyane” by the divider extraordinaire, leader of enda Isaias, Isaias himself. Even those who discovered their Eritreaness just then questioned their patriotism. So, yes of course, it was a time when an assembly of twenty people representing the opposition was indeed a meeting of hzbi ertra. Indeed, it was a meeting of those who represented the never-dying spirit and conscience of patriotism.

Three years ago, the tired and wronged opposition camp was exhilarated with the advent of the nouvo-opposition. They, myself included, thought that we could now be a united people and live together in peace.   We would all be equal, including the multitudes of “hzbi ertra!” -–in the thousands, in the tens of thousands–who live in the godforsaken refugee camps in the Sudan. Unfortunately, it was not to be: some believe that “Sudanized refugees” don’t count. Some believe that if there is to be change in Eritrea, it should come through the glorious blessings of a few NGO-financed “leaders” with a divine right to rule.

Three long years later, some groups that started with fifteen people are, after three years, still loyal to that number. The whole idea of a political party or a political organization is to compete for power in a pluralist atmosphere. And that requires expanding constituencies, which in turn means votes. If the constituency is not expanding, worse, it is shrinking, what keeps those groups alive except personal egos? I know many able people who could make a real change if only they subdued their egos and merged with others like them. That would have stopped the “lack of new-blood” cry that is coming from all corners. But no, they prefer to remain assr-aleqa in their own small corners, assaulting their fellow compatriots.

The Tools of the Intelligence Trade

A few months ago, I met an arrogant camouflaged politician who went berserk insulting the whole opposition camp. He insulted every opposition group saying, “they are tools of the Weyane!” He further started to talk as if his organization is attracting people by droves and as if people were queuing to join the party that he is, knowingly or unknowingly, crippling. I told him that the whole opposition structure is composed of amsa-aleqatat, organizations whose membership roster is a maximum of fifty lines long. I made a mistake then, in fact it is ten lines long – not even as many as my aunt’s undeclared political group of fifteen people!

But who gives people, like my arrogant friend, the inspiration to attack the opposition they so much victimized for decades and insist on continuing to victimize? Unfortunately, to some, Eritrea is made up of three groups: people who share their values, people who can be compelled to share their values, and people who have to be marginalized, and “de-citizinized.” Oh, there will always be some fine-sounding reasons to de-citizenize the people but in spirit and content, there is no difference between yesterday’s “Fifth columnist” and today’s “sovereignty-compromiser.” Even the people making the accusations and the people being accused are the same. In fact, even some of the tools being used are the same: stalling.

In the intelligence world, there are many diabolic methods of fighting a force from within. One such tool is known as the Stalling Method. You don’t face an action head on; you join the trek and stall it to immobility from within. If you want to understand the stalling tactics used on the opposition, check the major activities over the last four years and see what happened to them all! They all ended up facing the wall and going nowhere and they silently died out. Check the themes that are cleverly thrown to confuse. There was the theme of “Peaceful struggle” not as an intellectual exercise or as a principle, but as a new topic for stalling the move. Check the “democrat or not?” exams, yet another philosophical digression, specially coming from people who have a very checkered past on that score. Check out the “final and binding” cry not just as a principled expression of an organization but as a demand that others follow suit and that if they don’t, there is no other conclusion but that they are agents of Ethiopia. All are stalling tactics because they are not being asked to clarify issues but to stall a movement. Check out all the high profile meetings and declarations and ask what happened to them all. You will get the clear picture!

Despite the efforts of the stalling engineers, what Eritreans from all corners have been expressing is one major demand: unity. There is much that is encouraging in this regard. There is talk that several organizations are involved in an extensive dialogue to form some sorts of a coalition group. It is a welcome move: at least those who think they are big, when they are not, can actually start to grow in number. In fact, I can foresee three major blocks in the formation. My hope is that such mergers and alliances among the opposition would not be a cause for ugly signs of competition. Like many Eritreans, I only hope that the sole target of such alliances at this moment is the brutal corrupt regime in Asmara. Once united and free, Eritreans can establish a just nation that is at peace with itself and at peace with its neighbors. Only then can we divorce the life of a Terraray: endlessly talking about borders and lines while those who are supposed to benefit from such exercises are perishing. Practical sovereignty of the people must come before the theoretical sovereignty of the land.

For those who are not aware of it, in the Habesha legal tradition, there is an order in the village assembly, the Baito that bars the defendant or the accuser from uttering any word during the deliberation. If the person who is barred utters a word, he is sanctioned by the Baito. How does a defendant show his disapproval of what the accuser is saying? By using body language and by clearing his throat: “AHEM.”

Once the Baito issues its verdict, the execution of the ruling is left to the plaintiff and the accuser. One time I witnessed a Baito assembled to rule over involuntary manslaughter of a man. The family of the deceased was very angry and wanted to avenge the blood of their loved on. The Baito ruled the victim’s family should receive financial compensation, and to bring the matter to finality, the defendant’s family should offer a bride to the victim’s family.  The ruling was in fact final and binding…but the details were left to the two parties to negotiate. Who would marry whom was not part of the deal. The villagers went back home to see and list of the youth who have matured and should be married. The shortlisting process went on for weeks. Finally, a lucky young man was to be married to the only four-year educated beautiful girl. Of course, they talked about the details of the ruling, the number of cows and whether they should get them before the rainy season or later, and whether it should be cows or bulls, and how old. The important thing is that the matter was resolved to the satisfaction of both parties. That was one of the most valuable experiences I learned in resolving conflicts.

Now, let’s see our version of Final & Binding. Let me begin with the obvious: of course, EVERYBODY is for a “final and binding” settlement to the border issue; otherwise, one is rooting for war.  The question is this: what if, in our example above, the “Baito” dissolved itself and one of the parties refused to implement the ruling of the Baito?

My position is the same as it was in 1998 and it begins with this premise: nations don’t go to war, people go to war. Politicians don’t pay for wars; people pay for wars. I will always choose the path that minimize the risks of war; I believe all who, in one-way or another, claim to be advocates of the people, must do everything we can to stop wars even if the position we take is unpopular. Such a stand might come at a cost; only the willing take such risks. Cheap sloganeering doesn’t involve any risk–or courage.

In 1998, I felt that some Eritreans were, knowingly or unknowingly, beating the drums of war.  I didn’t say “ahem”; I said so. It cost me much, including friends. In 2004, I believe the shouters of “final and binding” are, knowingly or unknowingly, cornering the two sides into war. And I have no intention of saying “ahem”; I will keep saying so and, I suspect, I will lose friends in the process.

It is particularly heartbreaking to me when the provocation and the chest-pounding comes from people who are sure to have themselves and their loved ones at a safe-distance from shooting range.  Isn’t it selfish to say, “final and binding” just because it makes you somehow feel right and righteous and a “patriot-on-the-cheap”, even as you know that this in no way contributes to alleviating the suffering of the people and, in fact, makes war more likely?