Posted on February 14, 2016 by Semere Andom in Articles 34 Comments 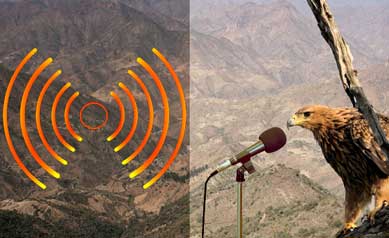 There are mountains that talk, eagles that thank, and lyrics that speak to non-humans.  And I still remember where I was and what I was doing, when for the time I heard someone talking to an eagle and the eagle responding. Wedi Ghebru was singing, “Abba-Gunbah Berekha ab Homib entay re’ikha…” I did not know what Abba-Gunbah Berekha meant, so I asked and I was told it meant an eagle. The singer was interviewing the eagle, asking him what he saw (I presume after the civil war), pleading with him to tell it all. The eagle responded with excruciating detail about the dead and the maimed, about the dying and the suffering all over, as the song roamed in the Eritrean wilderness.

Much later, I attended a concert by the EPLF central cultural troupe and Zainab Beshir sang the “Eagle Of The Sky”, where she too, asked the thrilled and thankful eagle, who was thankful to the youth for killing so many mercenary soldiers, who was pleased to obtain his food in his sleep: (Hobay ferha itaaba, dib mikraaru sigyaatu rekba): Here are some parts of the lines translated into English:

I will tell you what I saw
I went down to vast Barka
I found the bodies of soldiers
I owe you and I thanked the youth
After a week I went down to Sahel
I took a meal from the gardens
As I asked the villagers
Of what was going on
I found the corpses on my arrival
Without a goal they enlist devoid of a cause
It is in Eritrea where they get wounded
We saw the mercenary army escaping
The bankrupt army glanced towards Nakfa
When we caught up with them, they surrendered
The eagle of the sky was thrilled
He was not tired
For he found his food without lifting a finger

In the same concert, the singer Alganesh sang, Asmara, Asmara, and the eagle was once again asked; in this case in a more cheerful, less melancholic and less morbid manner. The eagle was asked to pass best regards to her beloved Asmara.

Before all of them, immediately after Nakfa was liberated by EPLF in 1979, Wedi Tukul interviewed Mout Denden in a song by the same title.

I, mount Denden
I have things I saw
What I saw was an attempt occupy me
With their foreign experts
Their eyes brightened to impose their plans
With Napalm they shredded the leaves of my trees
I, Mount Denden I have martyred comrades
With whom I have a covenant from early on
They fought hard so the a wolf would not prey on me
Only to them I owe deference
Soviet made tanks that throw bombs
I am not afraid from the plains, nor form the hills nor from the mountains.
War plane in the sky
That drop Napalm
All foiled by the strong will.

But what Wedi Tukul said about Mount Denden was even stranger than the lyrics that talked to it, when he was asked about the story behind the lyrics and its inspiration, he made it sound as if Denden has a life of its own, as if it can deliberately exude strong will and resilience. Here is what he said when responding to what inspired the writing of the song.

In high school I saw a play by the EPLF cultural troupe called “Keyah Mendiley”, my Red Handkerchief. In it, a dashing, charming and a highly educated Eritrean man was ill and so he walked into a clinic, when the nurse in duty asked him what his profession was, he responded that he holds a degree in Law and Justice from an Italian university. It was love at first sight. But the lawyer soon joined the freedom fighters. His lover was devastated. Undaunted, she wrote a love letter and since it was impossible to easily send it to the field, the lover devised an ingenious delivery mechanism: she entrusted it to the wind. She first had some moving conversation with the wind, “Haderakha, Niffas berekha…”

The wind did not disappoint the heartbroken lover and delivered the love letter entrusted to it to somewhere in Sahel. When a group of freedom fighters saw an envelope swirling towards them by the wind, they grabbed it. Surprised, they told each other that this letter is addressed to one of our comrades and delivered it to him.

But before some take this piece the wrong way; as an assault to freedom fighters who authored the above lyrics and play, let me mention a cultural lyrics that we are all familiar with: the strange lyrics of ”Esseliye Ho…” played in every Tigringa wedding.

I have been fascinated by this lyrics for as long as I first heard it. I am still mesmerized by its origin, genesis, history, meaning, and allusion. Over the years; I had several explanations for its meaning, the most famous among my friends was this: the groom is the king of the day and since the word “essel” (to sworm) in Tigriniga is usually used for bees as in “nhbi assilu”, so I pontificated that the song is symbolic to the groom’s throne, the loved ones are both celebrating the temporal throne and pre-celebrating the product of the union, the honey, the future children. But my teenage friends would point to a different story. They allege that they remember the exact start of my fascination with “esseliye”, they remind me of the student picnic we went to in grade eleven.

During the trip back home, the bus broke down, as the hired driver and his assistant repaired the bus in the roadside, dusk fell.  We joked and played, some sang their favorite songs, and some danced. A classmate spontaneously stared to sing “esselye” and some one pulled my girlfriend and danced with her in a mock “esselye ho”. We had fun, we laughed, the bus was repaired and we went home in one piece. Lo and behold, three weeks later, some one, much older, much, much  richer, more educated, I also think in law from Europe asked the hand of the that girl. She was soon married away. That is the theory that some of my friends use to explain the start of my fascination about “esselye” and its power of premonition.  I, of course vehemently disagree.

I would like to ask our artists who play in weddings to follow the footsteps of the late Poet Dr. Russom Haile, who wrote his “allewuna, allenwana” poem to speak to both genders. I would like to ask the singers to also include/alternate the following lyrics the next time they sing “Esselye ho” in recognition of our women.