Who is More Racist? 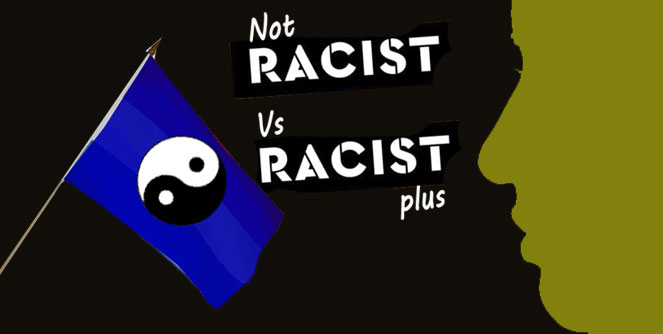 “He that is without sin among you, let him first cast stone at her.” John 8:7

One random Saturday morning, I was having a cup of coffee with a friend in a Starbucks stores. As usual, I was having my black coffee Grande, which is the medium size by Starbucks standards, with a little of sugar. As much as I love to sip  it, I still can’t stand coffee without sugar. My friend was having small size coffee cup; we were not talking about anything in particular. He was just telling me about the new job that he got until suddenly, our conversation turned into something serious.

It started when my friend noticed that a couple of customers changed a table  after another one sat right close to where the  customers were sitting. Apparently, my friend was curious and attentively paying attention to what was going on a few feet away from us while talking to me. Multitasking? Maybe!

He suddenly said, “This White people are so racist! Did you see what the couple did when the black man sat near them? It was a rhetorical question, of course. I asked him what happened, and he said, “as soon as the black man sat near the table where the white couple was sitting, the white couple got up and changed their seat just to be far from the new comer”. He ended by saying, “this is ridiculous!”.

I was truly mesmerized by the intensity of his anger and disbelief. I asked him how he could be sure that the reason why the couple moved away was based on racism. He said, simply because he could see and tell. Of course, I did not share his views. I simply thought his conclusion was based on a preconceived notion that all, or most, White people tend to be racist. I did not say much about the whole thing and tried to switch the conversation to some trivial topic.

However, a few minutes latter, I saw another couple, both men, walking towards the same table where the previous couple was sitting. It was then that I really wanted to see what was going to happen. It happens that the arriving couple went ahead and, after exchanging the usual pleasantries,  joined “the racist couple” in the same table.  Again, it was then that I understood the reason why the previous couple (a young girl and a man, both in their mid-twenties) had switched a table. I could not help it but laugh aloud and ask my friend if he still believes that the reason why the first couple moved to another table was because of racism. Then I said “you see, we tend to jump into a conclusion and make a mistake. You thought the lovely couple had a sinister motive for changing their table. When in fact, as you see, it was most probable it was because they just had a call and realized their friends were coming to join them. And it so happened that the timing of their table change happened right after the lonely black guy arrived and sat beside them. You, however, being a typical Habesha, opted to just think of the worst. You did not even want to give them the benefit of the doubt”.

I finished my sort of lecture by saying to my friend, “this is one of ‘our Habesha’ problem. We think of ourselves as righteous and always correct, when, to the contrary, we are the ones who most of the time find ourselves on the wrong side.” I continued, “let me tell you one thing that has been bothering me for a long time, and I have been struggling with myself with that dilemma for quite some time now. You see, my dear friend, when it comes to racism, I believe we the Habesha are actually  the most vicious and culpable in the whole world”.  Obviously he was not pleased with what I said because everything that I said contradicted with the belief he held for too long regarding the pureness and awesomeness of being an Habesha. He was sort of offended that I said “we were the most racist people on earth”. He countered by saying,  “How dare you say that? Are we not the most welcoming and peaceful people in the world? Have you even considered the fact that any ferenj can live in Ethiopia or Eritrea, for that matter, without being singled out? Did you forget that many people love the fact that we are always smiling? And, guess what, our smile is the most genuine of all smiles. Gebrieln new yemilh!”

I acknowledged some of the points that he brought but I did accept that our smile is truly genuine. When an Habesha smiles, it is always for real. We do not know a fake smile.  “I give you that!”  I said.  But I was in a mood to argue with my friend of many years on this subject. However, there has always been something that I wanted to get out of my chest, and I started saying  “but..”,  he did not let me finish what I was about to say. He interrupted me (typical of Habesha trait) and said, “ Oh no,  there is no ‘but’, everything I said is true”. Of course, we Habesha hate to be proven wrong.

After some consideration, I wanted to let go and just enjoy my coffee. But, my friend would not let it go and he kept arguing about everything from how America is considered the most racist nation after Germany. I was bewildered how he brought up Germany in in the conversation. I asked him if he ever been to Germany  (because I have).  He countered by stating that was not the point.  Again, typical Habesha- not sticking to the point. He argued about the genocide during WWII. I tried to explain to him that the current German generation is quite different and very welcoming, again, because I lived there and I know them. No, that did not matter to my friend. It became clear to me now that it is usually a difficult endeavor to make substantive argument is discussions with Habesha. There are very few people that I truly enjoy discussing with on any matter (my friends Dr Assefa and Teddy I love you for that and more). Do you see my point? I even sidetracked from the initial point. My point was that we the Habesha are not blameless when it comes to racism. Maybe we are the worst.

Before I continue, let me try to define what racism is:

As human beings, besides the fact that we consider one race has better ability than the other, we also believe that one race is better looking than the other, or has better hair than the other, etc. Is this not the case in Ethiopia and Eritrea? How many times have each of us uttered phrases like “Inezih tiquroch eko…”, in a derogatory way,  to refer to any black person? How many of us have referred to people mostly from the southern part of our country, and to African-Americans,  or to Black Africa, “Yihe Bariya” (literally meaning-this slave!), or  “Yihe kinki ras”?

Let’s be honest! Have we not uttered these and more sinister words towards our own African brothers simply because they look slightly different than us at least once in our lives? Even worse, we make fun of them simply because their noses are not as straight as ours?

Are we not hostile to each other simply because we are of a different ethnic group? Is it not true that Eritreans call Amara “Adgi” and the Tigreans “Agame”. The Amaras call the Tigre “ Anbeta belita, Chigaram etc..” The Tigre call the Amara “neftegna, lazy etc..”  The Amara call the Oromo “ Gala, dula teshekami, bale boti chama, Gimatam etc..” Or, the Amara calling Eritreans “ Ye Talian ashker”. Even worse yet, we call our African brothers “ Enezih bariyawoch sigemu eko!” And so on and on! That is a definition of racism, admit it!!

I remember how one of our family friends reacted when her daughter brought her boyfriend to introduce him to her parents. She literally fainted, seriously. That was because the boyfriend was an African-American. This kind of sentiment is abundant among us, the Habesha – Ethiopians and Eritreans alike.

I have also been guilty of the above occasionaly. I have said these offensive words before I realized how ugly and racist they were. I only hope that I will never say these awful things anymore!

Therefore, my Habesha brothers and sisters, stop being hypocrites and stop complaining about racism here in the USA, which , according to my understanding,  is a lot better than what we see in our own countries.

Those at the top of society fan ideas of nationalism and racism that divide the people. Sometimes, those who hold such traits do not even have to be at the top, they actually are in the middle and hungry for some kind of power through creating animosity and discord between two people, usually of different ethnic groups. Without going through more details, let me just state that this is what is happening right now in our beloved country.

Racism is not based only on skin color or ethnic background; there is also a form of racism related to religious beliefs. I also strongly believe that It is racist to suggest that one religion is right and all others are not. Does this ring a bell, my dear brothers and sisters? I know a family who disavowed their only daughter simply because she joined the protestant church. How many of us are comfortable eating in a house of a Muslim, if we are a Christian and vis-versa?  Yes, let’s be honest: we are among the most racist people on earth. How many of our sisters have been outcasted from the community they love because they got married to a black person?  So, ask yourselves, who is more racist? Are we not?