Eritrea At A Crossroads: A Book By Andeberhan Welde Giorgis

Posted on October 18, 2014 by Asfaha Woldemichael in Articles 34 Comments 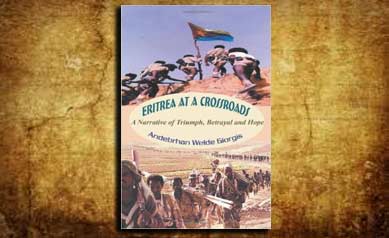 The 660 – page book is written by the scholar, fighter, statesman, Ambassador Andebrhan  Welde Giorgis, where he eloquently exposes the ills of the power hungry dictator, Isaias Afwerki. To be fair to the author, he does not engage in nasty and sour personal attacks of the president, rather, he artfully shines light on his incompetence, his brutality and his rigidness which evidently resulted in untold sufferings of the people and in the free fall of the country.

On page 233 the author writes “The state of Erirea’s economy and the condition of its people show the wasteful, inefficient and demeaning features of the coupon economy designed to serve an obnoxious control function, the blight of indignity it inflicts on the people is a daily curse that is deliberate.” How true!

The author skillfully unveils the inner works of PFDJ behind which conspiracies are hatched in order to purposely humiliate the dignity of the heroic people of Eritrea. Through his linguistic excellence, Dr. Andebrhan doesn’t shy away from sharing his frustrations with the head of the PFDJ that his repeated attempts to temper his capricious nature often fell on deaf ears. In fact as you might have read it in the book, you will notice Isaias assigning him from post to post and not giving him ample time in one post to produce a tangible progress. Yet ironically, he always needs him to be part of his team, particularly in diplomacy and in serious negotiations with foreign entities on behalf of his government.

On page 314 Ambassador Andeberhan writes “The absence of countervailing constraints to the exercise of arbitrary power has given Isaias’s dark side, which thrives in the pain of those he condemns to freezing, torture or death, free rein to trample on the basic rights and civil liberties of the people and condemn many Eritrean patriots to extinction.”

Indeed, Ambassador Andeberhan is right on the spot to describe him the way he does. He is one who celebrates on the tears of the Eritrean mothers and the cries of their children. Here, there is one point the doctor missed or may be it is hidden somewhere in his humongous book; that is, that Isaias has never ever accepted any responsibility for the crimes he perpetrated upon the people both in per-independence and post-independence era. It is always someone else’s’ fault. This is a proven fact.

On page 323 the good doctor precisely pinpoints how far Isaias could go to preserve his power. He writes “Regrettably, the malignant practice that bedeviled the evolution of the armed struggle (ELF, EPLF) has given rise to a political culture of extreme intolerance of pluralism that disparages independent thought, criminalizes divergent opinion and equates dissent with treason and treachery in post – independence Eritrea.”

As the author alludes to, during the armed struggle our two political organizations were at logger heads with each other and had divisions within themselves. Similarly, the Eritrean peoples’ loyalty was   divided between the two competing organizations. These old habits followed us even overseas and we are still unable to break free from the divisive culture. Once we liberate ourselves from this soccer fan–like insanity, we can achieve what is expected of us by our country. We went too far; we gave so much to retreat. After all we proved our unparalleled patriotism to foe and friend   equally. The choice before us now is moving forward.

On page 647, the distinguished author writes “Lifting Eritrea out of the muddle of its general crisis would take a colossal effort. Once set in motion, the reconstruction of a constitutional, democratic, and functional state would require the creation of an inclusive regime that values assertive citizenship capable of holding it to account through conscious and organized political and civic action. This would enable active, informed and organized political participation of citizens, directly and via truly representative organs, in the policy formulation and decision–making. It would also help build national cohesion based on consensus forged through autonomous conciliation of social and political conflicts.”

There you have it folks; the Ambassador does not only lay open the incompetence of the crime ridden system in Asmara, he also furnishes his proposals to the opposition how to salvage the sinking (Eritrea) ship by undoing the ills done by the junta that dragged the patriotism of the Eritrean people through the mud. By the same token however, he warns us that that will take a heavy lifting. The author’s foresight is much appreciated. Nevertheless, if we, the Eritrean people who care about the future of our country unite, nothing will be impossible to tackle.

The book: ERITREA ON A CROSS ROADS is interesting and informative piece that mirrors the experience of an educated, dedicated and intellectual freedom fighter. From reading his book, you will realize that the author was not a mere part of the crowd in the arena, and after independence in Asmara; he was the guy to go to. Perhaps this is why Isaias did not throw him in Jail. Don’t get me wrong though, it was not out of his kindness, it was because of the benefits he used to get from Dr. Andebrhan’s wisdom.

A brief look at a the author’s background: before he left the USA for mieda (Arena), Eritreans in New York and elsewhere in America, spoke of him highly. Andebrhan is credited for organizing the Eritrean North America Students’ Movement for Independence, otherwise known as ENASA. They praise him for his work ethic and his seriousness in whatever he does and he does it good. Some of them also remember him for his habit of reading anytime, anywhere, whenever he gets a chance. In some guy’s words: Andebrhan was a no nonsense individual in whatever he says and does. Because of his strong personality, they use to call him fondly “Andebrhan baAl betri.”

Therefore, one can safely conclude that his nationalism did not grow all of a sudden when he saw Eritreans leaving in droves for the arena/meda, his love of country was instilled in his mind and soul as early back as when he was   a student until at last it was time for him to join the rank and file of the EPLF. Because of his integrity from early on, many higdefites who read his influential book are beginning to question the governance of Isaias and his henchmen. One of these   people spoke to me personally and said “ I read the Ambassador’s book and I know he doesn’t lie. From now on, I will not support PFDJ. If the government is unable to provide at least the basic goods and services to the public, then I believe it is time for Isaias to leave.” This is an amazing testimony from a die – hard fan of the president. In other words, the author’s book must have sent shock waves to the annals of PFDJ.

On another angle, after brother Semere Habtemariam posted his commentary about Dr. Andebrhan’s book on the Awate.com, some negative opinions were observed. Thank goodness though, not many of them were repugnant. The usual  complaints can be summed up as: what was he doing with Isaias up to now? Why he didn’t leave early when he knew the direction of PFDJ? One can ask them as well: what were they doing here? Because they left early and they knew the crimes of the Isaias regime, did they do anything to stop him? By the way those who are organized and contribute something to the struggle against the regime do not usually complain about who came first or last. They welcome anyone who condemns and abandons the dictatorship.

If someone is a suspect, there will be a proper time and place to hold him/her to account. In my view, we should not put the cart before the horse and mess up our priorities for crying out loud. One can understand if the Ambassador was implicated in some sort of underhanded activities. Logically there would be noises in the background in case he connived with criminal elements to harm citizens. There is no evidence to that because his area of expertise was entirely different. He deserves the benefit of the  doubt at least he worked so hard to give us his book in which he left no stone unturned to reveal the pretensions and machinations of the dictator. It is obvious it took him more time to part company with the brutal regime; above and beyond his official duties, may be was doing research for his plan to write the book.

On the other hand, we must bear in mind how much this gentle man invested in EPLF while he could easily avoid joining the struggle and lead an upper middle class life. Instead, he chose to sacrifice his youth for the peoples cause and join the fight for independence with no guarantees whether he could make it in a complete piece to the finish line. Even   though the hopes were short lived, he was one of the fortunate tegadelti to see the independence of Eritrea. From there on, as Dr. Andebrhan himself details it in his book, he served the government in a variety of levels and when he could no more continue, he abandoned the system.

The good news about Andebrhan is that he didn’t give up on the good fight he committed his life to bring home justice and democracy and of course, the martyrs for which they paid the ultimate price. Once again he rededicated himself to ignite the struggle. Right now his colleagues and he formed a group known as Medrekh and are quite active in the opposition. Don’t quote me, but I believe they are playing a positive role in trying to narrow the differences among the opposition factions for which they should be encouraged. I call upon them to do more and more.

In conclusion, I recommend anyone not only to read the book but buy and read it. Money spent on this book is money well invested.