Strapping Youth: How Do You Feel About Our Incarceration? 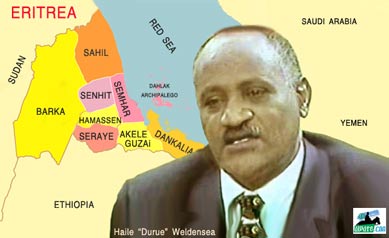 September 18, 2015 will commemorate the 14th year since the G-15 have disappeared into the Eritrean ether. The last count pegged the number of political prisoners to about 10,000. To remember this dark day, Amanuel Eyasu of Assenna interviewed Michael Araya, a former prison guard whom serendipity chose as one of the witnesses of the tragic story of the G-15.

He shared anecdotes of Sherifo, Aster, Maryem, Ogbe, Berhane and Haile DeruE. All unique and revealing, all intimate and heart wrenching. I am sure more able writers will pen about Eritrea’s decadence with better eloquence to indelibly document the crimes against humanity. But one thing that Michael Araya shared about Haile DeruE lingered longer with me. His story is particularly unique because the last one is the third time he is incarcerated. He has defied the last two. The second time he was sentenced to death, but a few days before his execution the ELF, after a meticulous planning successfully freed him with about a 1000 other prisoners. This audacious operation orchestrated the release of prisoners from both Asmara and Adi-Kaula prisons. Haile DruE among many former EPLF fighters was the beneficiary of that bravery. He joined his comrades in Sahel and returned to Asmara with the rest in 1991.

But many remember Haile DeruE not from his prison years, or Sahel days but from his services as Eritrean foreign minister who doggedly negotiated on behalf of Eritrea. Most people also remember him from his “tetelaQina” speech which PFDJ first applauded, then shrewdly manipulated to implicate him with “defeatism.”

In the above mentioned interview Michael Araya told Amanuel that Haile, DeruE was the first one to immediately accept the reality. He did not complain, exuded patience and upbeat demeanor. He never called his captors (guards) by their names, instead he endearingly referred to them as “gobezay” (Strapping Youth). The translation may not be apt, but the Tigrinya word connotes vigor, strength, audacity and tenacity, traits that this son of Eritrea is intimately familiar with. The last time he was freed from the Derg dungeons was by Eritrean “gobezays” in an operation when vigor and strength conflated with audacity and tenacity bestowed freedom to the chained.

Haile asked the guard of “gobezays”, how they felt about his and his colleagues’ imprisonment given that they have been part of the armed struggle that liberated Eritrea. One can imagine his heart longing for his days as a “gobezay” himself when his youthful legs effortlessly saddled the hills and rocks of Sahel. The open ended question he posed could not have been random but one that sprang from the memory seared in his mind when the Eritrean strapping youth freed him from prison to spare his life. He did not disappoint them. Prison did not soften him; it hardened him. He resumed what he commenced and became one of the founding fathers of Eritrea.

More than a decade ago when his disciples dubbed Isaias Afwerki the George Washington of Eritrea and his detractors called that notion a travesty, Saleh Younis, a founding member on his own right of a different nation, Awate, offered an alternative and creative rebut to both. In one of his articles he said something to the effect of: “Ok, Isaias Afwerki is the George Washington of Eritrea as both are first presidents but the question is where are the Thomas Jeffersons, the James Maddisons and James Mornoes of Eritrea?” Feel free to pick a counterpart for Haile DerguE from the American founding fathers but my take away from Saleh’s article was this: being the numerical first president of Eritrea does not make one a George Washington, the other founding fathers with unimpeachable contributions on the making of the nation must surround him to be counted in the pantheons of George Washington.

I think of Haile DeruE as the Thomas Jefferson of Eritrea and he is languishing in jail along with the Madisons, Mornoes and Franklins of Eritrea, peers of the “gobezays” who freed the political prisoners in 1975. Then, the prisons were run by Ethiopians and most of the Eritreans were assigned to low level jobs. But that was then, Eritrea’s gilded age and the “gobezays” inspired by the courage of their peers in prison collaborated in the belly of the enemy and committed to free their friends, brothers and sisters. And free them they did. One of the prisoners who was freed by ELF in 1975 was Wolde-Dawit Temesghen who reportedly threatened his interrogators that he felt sorry for them as he was confident that Eritrean youth will free him. A decade later those words turned out to be prophetic and not a mere smarmy exuberance of a teenager. When Haile DeruE posed the question he might have been hoping that the youth will free him once again, this time from the grip of the system he helped create. But what he may not have known was that PFDJ’s Alchemy has turned the gold to arsenic. The prisons of Eritrea are stuffed with Eritreans but in the last 14 years the “gobezays” that all the prisoners are pinning their hopes on, have not come to their rescue. Imagine how inspiring and uplifting it would be to free all the prisoners from Ela-Erro en mass, reminiscent of the golden days, rejuvenating the luster that Haile DeruE may have counted on and many in his predicament have longed for.

The opposition has failed Eritrea in many areas: they squandered the myriad opportunities that PFDJ offered them to remove it. They failed to create a formidable and united force. They also colossally failed to figure out the invisible hand that is creating havoc in their midst. Their successes (biAwet tezazimu) like Jacob’s angle are nameless, their hips are dislocated but unlike Jacob they have not received the blessing and their followers shamelessly feed on the dislodged hips. They also put all their eggs in one basket, Ethiopia.

The time has come for the opposition to relinquish its current course of action. If the opposition keeps doing the same thing and is expecting a different result— Einstein’s’ diagnosis of insanity, their epitaphs will read: “those who journeyed to Ethiopia to be buried”, to paraphrase awate forum commenter. But all is not gloom. There is a course that does not require to be united and can be accomplished in silos, one that does not need the temperament to figure out who is manipulating you. The opposition should try to do the following for change, if they still want to be relevant in the struggle of regime change: freeing prisoners, targeting PFDJ’s lucrative business and saving refuges.

Another former guard at Ela-Erro, Eyob Bahta told Elsa Chyrum that Haile DeruE has lost his vision as he could discern from his gestures when handling his meals— if that is not an oxymoron! When I heard that, I coaxed my memory to hand me the end of Adrienne Rich’s poem, “From the Prison House”: