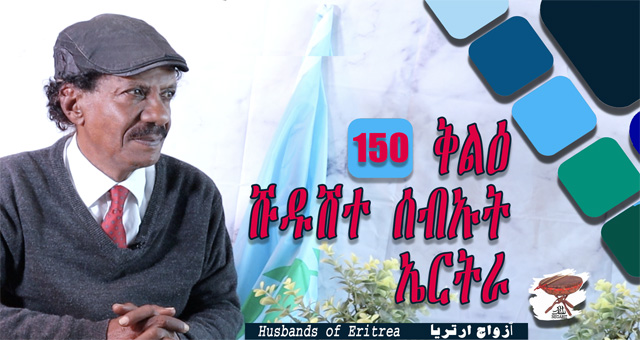 In the Tigrinya language we do not have separate words for sebay, as in husband, and sebaay, as in Man. Both are sebay. Therefore, the title is not about men but about husbands. Also, we refer to Eritrea in the feminine gender, Eritra t’Ewet, not Ertra y’Ewet, always in the feminine gender. But what triggered this title? The sanctions.

Recently, the US Treasury Dept, imposed the second-round of sanctions mainly on the PFDJ, and on some of the husbands of Eritrea.

It’s common in the Middle east for men to maty multiple wives, polygamy. But the culture doesn’t have Polyandry–a woman marrying multiple husbands, all brothers!

First, I thank all my audience for supporting me and keeping me engaged with your comments, your likes, and dislikes. I always learn from your feedback, even from those whose only skills are insulting. But I learn from it.

However, angry admonishing comments like “Keep quiet! Why are you wearing a suit?” Are annoying because they don’t reflect logic or intelligence.

Over the last few episodes, a few couldn’t hide their rage and they burst: “why do you have the old federation flag of on your side, don’t you respect our martyrs? it is an insult to resilient Eritrean people who voted 99.8% YES for independence, but salih you are telling us [you] don’t care about [our] bloodshed for 30 years, pls reply, why you are insulting Eritrean people.”

As you can tell, the above type of comments is not appealing to discuss (though they are juicy for mocking them). But still must be seen for what they are—everyone needs to have the freedom to say what is inside them…. And expose how they think. At any rate, I will address the topic of stupidity in my next episode– I apologize in advance to the thin-skinned, the overly sensitive, and those whose feeling can easily be hurt.

I found a tool for my next topic in a book entitled, “The Basic Laws of Human Stupidity”, written by the Italian economist Carlo Cippola, originally published in 1976. It’s a popular book that’s still being republished, the last edition came out in April last.

Nepal and its capital city Kathmandu

In the early nineteen-seventies, Katmandu, the Nepalese capital city was the hashish capital; the hippies who flocked there.

Tucked in a dark alley in front of the Grand Mosque in Asmara, Eritrea, there was a neighborhood where men covered their faces when they ventured in the quite alleys. In a corner of one of the alleys was a dark teashop frequented by the Kagnew Station-influenced youngsters, and wannabe hippies of the early seventies. The teashop was called Katmandu; it was a popular joint for selling and smoking Marijuana.

In the Kathmandu of Eritrea, I knew a few youngsters who thought my primitive Kerenite behavior needed to be civilized; thankfully, I never bought into that civilization! And the group consisted of five or six people; three of them died at age 17 or 18: one drowned on the Red Sea while crossing to smuggle himself to Yemen; another went to Italy where he soon died; and the third died in Eritrea.

Nepal (area 57,000 sqm and pop 29 million) is slightly larger than Eritrea (area 45, 000 sqm and a population between 2.5 to 4 million). Its population is about seven-fold the Eritrean population which the rulers of Eritrea never announced since they took power by the gun in 1991.

Nepal is also known for its uniquely designed flag, unlike any other conventional flag. Importantly, Nepal has one peculiar culture, Polyandry. In many parts of Africa and Asia, it’s common for men have several wives (Polygamy) but n Nepal, they have the opposite of that—some women marry several husbands, and they are brothers.

When a son reaches marrying age, the father searches for a suitable woman to marry the son and his brothers. While he older take care of their husbandly responsibilities with the wife, maybe in turns, the young will be in and internship in the marriage until they are ready to partake in the conjugal affairs.

Children born in a polyandry address the oldest husband as father and address his younger brothers as uncle (uncle squared. The reason for such an arrangement in the culture is to preserve the small farmlands so that the plots doesn’t dwindle in size. Otherwise, in time, the land will unproductive if it is divided into the inheritors for a few generations as happens in other parts of the world. It’s a system dictated by the scarcity of land in the mostly mountainous and snow-covered Nepal. And the wife owns all the land—a matriarchal system with a boost.

It’s has been a while since Kisha and Abraha Kassa has married Eritrea. But the Eritrean defense forces? I don’t think the hundreds of thousands of soldiers can marry Eritrea. So, I think the defense forces have accepted a few men, those with crown corks on their shoulders, to stay in the polyandry.

Hidri? Well, the husband that Hidri delegated must be a rich suitor who can pay a huge dowry. And the representative in the polyandry must be a dedicated NNNN from the diaspora!

The Red Sea must a mistake, they are counting Hagos Kisha in the polyandry twice. Rumors had it Kisha has two rings in his fingers…he can’t marry Eritrea twice: once on his own behalf and another on RED SEA corporation’s behalf. Red Sea Corp is a child of Hidri.

For now, the US Treasury thinks the six are the only husbands, but don’t be surprised if they discover other husbands. And if a husband cheats on the wife, there are repercussions to that. Everyone knows the PFDJ and its operatives are all cheating with Ethiopia. I suggest a quick divorce her wife chases them for alimony and other damages—I do not think she will ever forgive them for cheating on her with Ethiopia. And I am surprised….

Why are some Eritreans so worked up?

If you don’t know you have it, you can’t lose it.

Suppose you put a hundred-dollar bills somewhere in your house and totally forgot about it. If someone came to your house, found the $100 bill you hid and stole it; will you know about it? Will it the loss hurt you? Or suppose a relative that you never knew or met left you an inheritance. Before his death he entrusted someone to deliver a legacy to you but after your relative died, the entrusted person though, neither your relative nor you would discover it if he decided to keep the legacy to himself. Will be you be mad though you don’t know about the fraud?

There is a famous philosophers exercise: if a tree falls in a forest but there was no one to see or hear it fall, did it really fall?

In short, the sanctions are like the $100 bill that someone, stole, or the inheritance that an entrusted person defrauded, or the tree that fell in the forest.

None of those who are enraged by the imposed sanction know the capital, the operations, the net-worth, the assets, or the budgets of the above-mentioned entities. Why should you worry if Hagos Kisha’s money is frozen? It’s not yours because you don’t know about it!

Are you suspecting Kisha defrauded your wealth, and the Eritrean coffers … are you calling him a thief? But you always screamed form the bottom of your lungs that Eritrea’s husbands are “as clean as morning water”, very honest. I despise the stakeholders, but I have a lot of respect for those who silently give to the poor, the handicapped and weak, without fanfare.

But I can understand why those who refer to the accused as uncle should be mad—they are stakeholders in the booty that the accused husbands handle. As for the rest of Eritreans, they never had it and never lost it. If that was the case, why would have protecting their mother Eritrea. Aren’t they watching silently while their mother is being used by many husbands in a polyandry arrangement?

it tightened and its knots became intense
But it was resolved when I thought it never will.

Soon it will be over, and the Eritrean sun will shine again