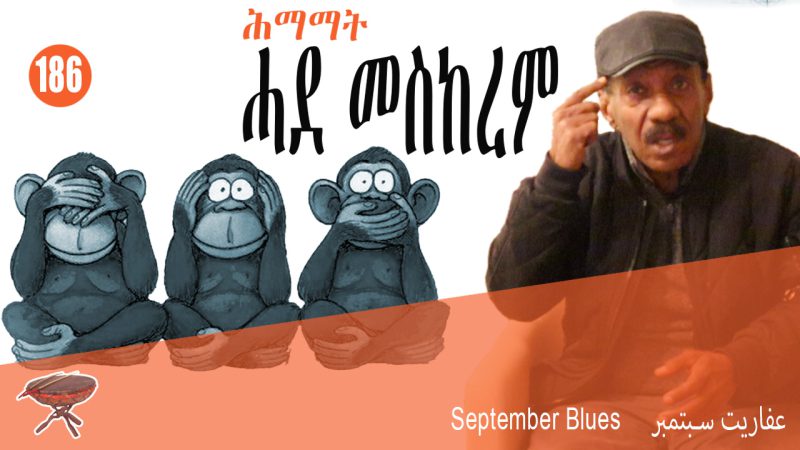 NB: this video is hosted in a temporary channel, not on Negarit. Please hel by sharing it//Saleh

Strolling around the city I met several young Eritreans, mostly new arrivals telling from the casual trendy greeting: deHan do? (Is it fine!). They look me in the eye and ask, “are you a guest here?”

Of course, I am, we all are. Everybody forced to leave his natural habitat is a guest, at least for one generation.

I wish they have a smooth transition to a normal life in their adopted homes. I wish them success and most of all, strength to deal with homesickness. I wish the pain of nostalgia will be easy on them.

I am in Europe where things didn’t go as I wished.

I had plans to tour many countries but unfortunately, I lost my phone at the Istanbul Airport while on transit to Germany. I discovered that as I was boarding the plane, I rushed out but couldn’t find it. The gate officers told me to report it at the Turkish airways counter in my next stop and they will report the loss. They assured me it will be found at the lost and found office. I was optimistic until I reported the incident at the Turkish counter in Munich. A kind lady was helpful and took notes and asked me for my passport to complete the report. I handed her the passport. But immediately her supervisor arrived and wanted to exercise his authority—he told me they have nothing to do with it and I must contact Istanbul airport. An argument ensued, it became heated and almost escalated to pushing and shoving. Frustrated, I turned my back and left. That night, I found the ‘lost and found’ website and started to file a report. I was asked for my passport number. It was not in my pockets or luggage. I gave up. Then I remembered I didn’t pick it up from the Turkish counter at the airport. Three days of back and forth, local and federal police report didn’t yield any result.

That’s how I became deaf, mute, and blind. Worse, I was locked from all my e-mail and social media accounts due to the stupid two-way verification. If you lose your phone, you lose all of that along. And don’t believe in globalization, the German google doesn’t know the USA google, the same with T-Mobile. You are on your own.

Now after so much trouble, I managed to open a new YouTube account just to post this episode—I can’t miss September 1, something we did every year for the last 22 years. I am counting on you to share the video, please share as much as you can. There must be a few who miss me!

I am recording this on September 1, the Day Eritreans fondly remember, the Day the serious struggle for independence was ignited by the national hero, Hamid Idris Awate.

This year’s September 1 was as difficult as many that proceeded it. I really didn’t know what to say but then I collected myself and this episode is the result of the reflection. Still, I am not sure whether I should have celebrated or mourned as an outcome of all the reflections.

When babies are born, they are received with ululations, three to seven of them. But if the baby is stillborn, it is deafening silence, except for some hushed crying.  Is September 1 a day of sadness or happiness? Is it a day of hopefulness of hopelessness? For me, it was a mixed feeling.

After thirty years of liberation struggle, we finally made it to Asmara, victoriously. Soon the euphoria evaporated, and reality sunk in. The seemingly never-ending era of joy was short-lived. Then the joy was snatched and taken away from us. And now we are looking at those who turned the victory into a repeat of the oppression that we struggle against. It’s sad.

An Arab saying goes, “Hameeha Harameeha”. When the trusted custodian becomes the violator of the trust. Are we in a situation that encourages, or even warrants, celebration? Sadly we are in a state of shock seeing the fruits of our popular struggle bastardized.

A person, obviously from the PFDJ cult, sent me a tweeter message request—I accepted the message from the person with a nick, “Me with My Government”. I thought it must be important message but it mockingly read, “Happy SEPTEMBER 1 [AND A VULGAR INSULT] KKKKKK.” It sounded like chaining the legs of citizens and mocking them for not being able to run!

I named my first child Lwam (Serenity). The name reflected my yearning for serenity, peace, and normality. Then my son was born when I was losing hope the PFDJ would ever reform itself and be a just ruler. I named him Adal, after the hill from where Awate launched his struggle. That time I was sure a second phase of struggle will soon follow, albeit, in a peaceful manner. I am very sorry my instincts were right; I wish I was wrong!

Let’s go back to September1.

A few days ago I went to a city that I thought was Gissen, the German city that occupied Eritrean discussions for the last few weeks. I looked around for stains of blood; I had observed a few persons were so sad because there was a confrontation between the PFDJ supporters and others opposed to the unjust PFDJ rule. The confrontation had resulted in the injury of a few people. That’s when the PFDJ supporters found their sympathy fiber. They made so much noise expressing their indignation and sadness at the ‘spilled blood”! I didn’t find any stains on the streets where I wanted to pray for the victims to get well soon. Nobody I asked from the locals had an idea what I was asking about!

When I returned to Munich, I told some friends that I didn’t find any stains in the streets of Gissen, it had rained, and it seemed the rain washed the stains out. The friends told me I must have gone to Giesing, not Gissen—which is about four-hours train ride to the North, around Frankfurt, not the suburb of Munich. Aha, Gissen vs Giesing.

But that is not important. What is important is the PFDJ lots who never cared for spilled blood suddenly were touchy-feely about a minor injury! Is there valuable and cheap blood? Wasn’t the PFDJ spilling the blood of Eritreans in border-crossing and in its habitual, never-stopping battles that it waged across the region?

The PFDJ cult is not able to think rationally, its followers would rather insult the intelligence of their compatriots. Hey, cult members, isn’t cheering and fanning for bloodshed your habitual behavior? Were you not igniting and fanning battle fires that doesn’t burn you in your safe places?

Remember, if you invade other countries, or get involved in their internal affairs, you have no morale ground to complain if the same is done to you.

For the sake of everyone, stop you cycle of violence and shed off your arrogance,

That’s hypocrisy at its worst.

Finally, September 1 is a day worth remembering, Happy September 1, though I say it with bitterness and didn’t come out from me with ease. I wish soon the day will regain its natural place in our lives. I wish we will enjoy the denied fruits of our struggle, (that’s still denied to us 30-years later).

I wish the darkness will give way to a bright morning, to end the nightmare from the past. But we must usher that bright day, it will not come on its own. Remember September 1.