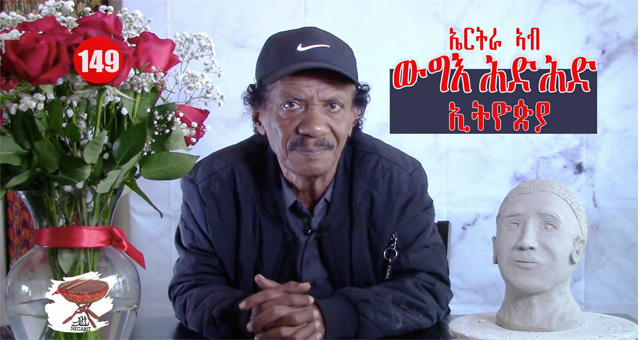 Writers or speakers who discuss everything under the sun should not shy away from raising critical topics for fear of annoying a few. Discussing sensitive issues is what I intend to do in the coming few episodes.

In today’s Negarit 149, which is an introductory episode, allow me present to all of you, who care about the freedom and equality of all citizens, and struggle to establish a just society, a airdry clay head bust of Ibrahim Sultan, the great Eritrean Emancipator who played a leading role in the eradication of class inequality among Eritrean citizens. Please note I am an amateur, though I have a passion for sculpting.

For too long, the PFDJ has been spreading lies, brainwashing the young, and confusing the Eritrean society with no challenge. It has been indoctrinating Eritreans with their one-sided narrations. Such challenges are the task of a free, non-partisan scholars, academicians, associations, and competing political parties.

Serious dialogue and correction of narrations cannot be done in the absence of freedom of expression. Therefore, it’s upon the conscious to expose the partisan history and strive to make it an all-encompassing national narration that all can embrace.

That is a national task that needs to be attended because the seemingly small issues have damaged The Eritrea social cohesion and national psyche. It must be challenged and resolved. Otherwise, they will always haunt us. We do not have to remain for Liqqi Chfliqqi, dented as an old lullaby which goes as follows:

Material and physical development are impressive, but they are not the only or the main measure of development, which is also not measured by military might, or by ugly structures covered in glass, nor edifices that benefit 1 or 2% of the population.

A genuine development of a nation can only be driven by an enlightened and developed mind. If the mind is cluttered with superstitions, boasting, arrogance, and primordial beliefs, the nation will lag in all aspects of life. And that starts with critiquing the culture.

A nation that spends two decades sloganeering and screaming Weyane, will not move forward. We have been caught in that rhetoric of war for too long and forgot there is life beyond war, which must have political ends that usher peace and stability, not remain chained misery and wastage.

For the last year, the region has been consumed by the war, counting body while suffering from untold hardships. Still it’s going through mayhem. Ask any Eritrean or Ethiopian, they can detail the battles: who was defeated and who was vanquished in the series of battles. Very few look behind the wars to see the other aspects of life: social, human, economic, and political damages. We have become addicted to news about wars; sadly, the drama that kept us busy for two decades is repeating itself again.

My interest in this war is simple: the end of the nightmare called Abiy and his superstitious legacy. I believe then, the rest of the issues will be easier to resolve because its’ Abiy who took the already complicated struggle to the worst level. I hope with the demise of the PP, half the job will be done. As for the war, the longer it continues, the deeper and worse it gets.

Don’t you think there are other issues that should preoccupy the people? Like, what happens after the war wraps up? Can there be peace without stopping the centuries-old cycle of wars guided by the medieval Solomonic doctrine?  The region has been hibernating for too long.

Bears hibernate during the cold season and consume the fats they gained during the non-snowy season, and they repeat the same thing when the season is over. However, if they do not hunt enough to replenish their lost energy, they consume all the fats they accumulated over the ages. It’s like self-cannibalization.

The people of the warring region are getting weaker and weaker; they neither find physical nor mental nourishment. All consumed by wars.

In 1998 when the Badimme war was ignited, I stood against it and paid dearly. The regime made everyone believe supporting the war is the most patriotic thing to do. I refused to cheer while my country was marching towards the abyss and people were dropping by the thousands. Time proved me right and it’s no more a matter of debate. People have become victims of human trafficking, poverty, exile, lack of justice and peace, and always seeking a safe refuge. The miseries keep compounding.

Twenty years later Eritrea is involved in a war that is none of its concern. Even if it was, war and destruction is not the only way to protect your peoples’ and country’s interest. But “if you are hammer, you think everything is a nail” and you are tempted to hit it; any problem in the minds of the PFDJ regime, can only be resolved in a war. And it has already been a year and continuing. Still, Eritreans are living in appalling conditions: lack of rights and justice, eating their own stored fat and getting feeble by the day.

It saddens me to see a new wave of people who think they invented the art of cheering such a war whose fires will never reach them. I wish they remember that many cheered the Badimme war and today they are still alive in safe places, while the tens of thousands killed in that war are no more. They’re almost forgotten except by their loved ones.

The war will consume so many but finally it’ll come to an end. The agitators are only repeating the same agitation that we saw during the Badimme war, and soon they will blend in with the rest like they had no part in the destruction. I hope they have some conscience left and it will keep hurting them and that helps them to be good people.

In one of Jubran Khaleel Jubran stories, a mother who lost a child said, ‘why can’t the war br holy when my son has died in it?’. To those who lost loved ones, the wars are holy. It is at the human level. But for a country to wage an unjust war, it’s morally wrong. An army is a tool in the hands of politicians and if they see seem as dispensable, they use them. And soldiers are ordered to carry guns and fight, if they don’t, they get killed. Of course, some armies are disciplined, and others are not. But it is the nature of wars to be cruel because the bad elements take things in their hands and wreak havoc. But despite that, the nature of armies is similar.

The suffering from the endless wars is not yet resolved, and the nation is condemned to scream Weyane day in and day out. In Ethiopia, a childish megalomaniac named Aby sparked the current round of war and he is at it–he will not stop on his own unless he is stopped.

Such are the problems that requires an honest appraisal of all backward cultures that are still stuck in the medieval ages.

The above is my reason for deciding to address what I think is the structural faults in our psyche, caused by culture. However, for that to bear fruit, Eritreans need to have a commonly accepted national narration; I will present mine like I have been doing for many years hoping this time it leads to an honest reflection, awareness, and to a fruitful debate.

Usually, people do not pay attention to what matters; there is a lack a cohesive vision, a lack of a common, and a lack of a clear narration, and vision. If equipped with different narrations, the concerned are driven to walk aimlessly with no clear destination. And I have consistently repeated this detrimental matter and paid dearly for it.

The Habesha culture and the regional attitudes need an overhaul. War and bloodshed that has been normalized over the years should be the last resort and not the mode of life and politics. Sadly, people, including those who should know better like to live in mythologies, superstitions, and misconceived narrations.

Many need to be awakened from their slumber—the culture stinks. Yet they lack humility and do not have the courage to face reality. How many times have you seen a serious critique of the history and culture? Very little. In its place, there are a lot of prideful boasting that present the culture as if it’s the most wise, intelligent, and enlightened culture.

This is a challenge that requires knowledge, courage of citizens equipped with morale bravery, honesty, and boldness. The culture is crying to adopt enlightened values. A cultural revolution is a must to eradicate medieval, back warded thinking. The crippling superstitions and mythologies must be eradicated from the national discourses. Superstitions like the 3000-year folktale of Minelik and Mai Bela should be relegated to the venue of folktales. No enlightened person can consider defending or rationalizing it, let alone be guided by it.

An honest and clear national narration is badly needed, and that is why I will present my views on it. I will start with the history of Ibrahim Sultan and the Flag…then follow it up with demolishing other myths that the PFDJ has built over the years. And remember, the good book says, the Truth Shall Set You Free.

Eritrea will prevail. Soon, the sun will shine brightly, and justice, genuine freedom, and citizens’ dignity will be resurrected. Despite the annoying noises, never doubt that.