Seminar in Sweden: “Who Are Eritrean Jeberti?” 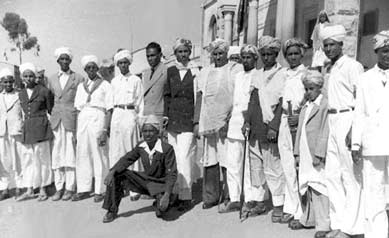 Sociopolitical, historical, deeply entrenched hegemonic ideologies are socially constructed situations; as such they require equally forceful counter narrative that emanates from a group that had been negatively impacted by such misconstrued reality. The beginning of the latter appeared to be afoot, to which I had the pleasure of being in the audience, virtually speaking, last weekend.

It was fascinating to observe the beginning of the evisceration of myths, the negative perceptions that were made to feel real for numerous reasons about certain groups of people. By necessity, myths about a people require, make that demand, that the effected people assert themselves to own their own history by retelling it. It would probably take more than just one strand of a narrative to get a grip of the complex way in which Jeberti Eritreans have been portrayed in the annals of history in the region, a region in which they have been part and parcel of sociopolitical and socioeconomic landscape since its origin and the inception of its geopolitics, as it were, in the conception of Eritrea as a nation-state.

Orally passed mythologies and legends abound in the realms of prophet proportions as aided and abetted by lack of rigorously researched material being availed up until the publication of “Menyom Eritrawyan Jebrti” earlier this year. Dr. Mustafa (2015) put the Eritrean Jebertis out of the myth into the realms of historical and cultural map, one that’s backed by over 150 scholarly references.

The power of myth is such that it can be used to perpetuate and politically exploit by those who wield sociopolitical power. However, “Menyom Ertrawayan Jeberti” one hopes will help its subjects to burst out of the parenthesis in which they have been circumscribed by the current regime in Eritrea that single handedly and decidedly determined the Jebertis only deserve to stay bracketed for identifications purposes. They cannot simply put Jeberti as their identity as the callous regime in Eritrea, with no rhyme or reason, unequivocally made it clear that Jebertis were no more than afterthought, an asterisk, dependent clause, if you will, the existence of which can only be made possible under the recently coined and minted Tigirnya Biher. In a word, Jebertis can only exist in the shadows of the Tigrinya population. Dr. Musapha’s book is here to help in the amelioration of that conundrum as he appears to want for the Jebertis to carefully tread as they break free from such an interpolation while at the same time they don’t go seeking for the exclamation point, rather settle in the middle ground, a period would have to suffice seems to be the overarching message, gathering from the Seminar entries.

At this point, a disclosure of sorts should be in order. This is not a book review. Rather, this is about a seminar I attended last weekend (4 October 2015) via Skype in which several individuals who read the book provided the audience their book reviews through the spoken word in Stockholm, Sweden. And, I am here to report about the whole entrancing experience, a nascent experience that was the first of its kind.

At long last, Eritrean Jeberti are emerging to tell their stories and put the record straight. Since this is about the written word, about history, most important of all, about identity, it only makes sense to delve into various methods as I try to capture my personal experience vis-à-vis the said seminar. The maxim that’s commonly known to those who are interested in the written word is that if one wants to be certain that something is meant symbolically, must therefore be mentioned thrice for it to be recognized as such. Well, this is not about symbolizing the Jebertsi; therefore, by the end of this piece you may feel “Jebertied” out, if you will, but that’s what it would have to take for this group to regain its rightful place in the Eritrean national scene. It must own the conversation. It must keep its history alive. It must use this important book to begin writing from eclectic viewpoints, that’s how one owns the conversation. Not in a manner that’s in your face, but using the art of dialogue, the art of writing, the art of telling a story, the art of using facts based on research, and the combinations of which will naturally allow the flourishing of literary narrative, which has been in short supply for many generations now. Borrowing ideas from the literary narrative, let’s then proceed.

In what’s now deemed as classic novel of gothic, “The Thirteenth Tale” which at once riveting to say the least, is being brought here for this reason: “Human lives are not pieces of string that can be separated out from a knot of others and laid out straight. Families are webs. Impossible to touch one part of it without seeing the rest vibrating. Impossible to understand one part without having the sense of the whole” (Setterfield, p. 59).

Speaking of vibrations and all, it is truism that spider’s web has crucial role in a spider’s life as it allows it to sense any vibration on its web for mating and other myriad purposes. Considering this delicate balancing act that a spider has to conduct for its survival affairs, issue of identity has been one such frustratingly delicate endeavor for Eritrean Jebertis. This web of identity demands dynamism from its vibrant community as it has been evolving over centuries past. It is in that evolutionary process, the fork on the road seems to be in the offing now. Where to from here appears to be the question that the Jeberti themselves would have to grapple with and decide which path to take.

Do the Eritrean Jebertis want to remain insulated and remain preoccupied in treating their identity as static and be adamantly protective of such an identity? Or do they accept the fact that identity is malleable, as such they treat it with due diligence in embracing such dynamism? For the longest there had been this notion that myriad groups of Jeberti persuasion would have a huge number in their midst as communities in diaspora, however, would wish to remain apolitical to a point of stipulating it in their by-laws handicapping themselves from achieving their stated goals: i.e., the assertion of their identity to be known as one of the assorted ethnic nationalities within Eritrean proper.

Ostensibly, the question of identity, in Eritrean context, is a question of social, political, and constitutional, thus, it goes without saying that it would require an act of political participation to make the necessary changes that will lead toward the ultimate goal.

Therefore, it should be obvious by now that Eritrean Jebertis from all walks of life be cognizant of this fact: Much as they want to collectively decide on their Jeberti identity and that they are asserting themselves to fight the good fight via the means of policy, polity, and constitution in deciding the how, the who and the what part of their identity, it stands to reason they give such deference to any Eritrean who identifies him/herself as Jeberti, because identity is what one considers him/herself to be, not necessarily by what others say who one is or by a means of fiat as the Eritrean regime has attempted to do to the Jeberti Eritreans. It is worth reiterating the earlier metaphor the spider feeling all of the vibrations on its web. Imagining an individual Eritrean in that vibrant community of the Jeberti web, touching one part of that human web, it sets off vibrations in all of the essences of that individual and vice versa.

As sheer coincidence would have it the seminar from last week in Sweden seems to have found a logical continuation of it in California in December of this year. There will be a conference that will speak not only to Jeberti Biher’s notion but to all Eritrean nationalities who sympathize with the eclectic Eritrean ethnic groups, specifically, those who have been marginalized by the mainstream Eritrean hegemonic power, to openly have a conversation, a dialogue, a discourse that will, with certitude, give them a chance to collectively chart a path of their respective future. Now, that’s what has been missing from the Eritrean political discourse. I am glad to see such movements are finally afoot.