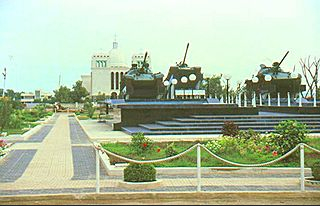 The Eritrean People’s Liberation Front (EPLF) waged Operation Fenkil on February 8, 1990.  By February 10, 1990, the military operation had achieved its mission: to liberate the port city of Massawa and to evict the occupying Ethiopian force– which lost about 8,000 soldiers in the 3-day battle.  The anniversary of Operation Fenkil is marked every year with solemnity and celebration: songs and dances; art and craft; laying wreath at the War Memory Square in the town center–aka The Three Tanks Center–and a televised address by self-declared president Isaias Afwerki in the presence of senior party and government officials.

This year, there apparently was no address by Isaias Afwerki–at least not one that was televised.

Beyond that, Isaias Afwerki’s refusal to give the customary annual speech in Massawa–a ritual he has observed annually for 21 years–indicates that the “21 January incident”, as much as the “Government” tries to downplay it, has been quite significant:

1.  The claim that Isaias Afwerki and his cult tries to sell–that he is a man beloved by the people and can walk anywhere, anytime unguarded in Eritrea– was always fiction given that, according to wikileaks, he has “three separate Presidential Guard units of about 2,000 troops each” reporting to Major General Filipos and a “70-man presidential bodyguard detachment” reporting to Colonel Tesfaldet Habteselassie.   But, when 6,000 Presidental Guard unit reports to Major General Filipos, and the general is one of the more disgruntled ones, that must not make Isaias Afwerki feel secure enough to have a public address;

2.  Since the ruling party never has congresses, events like “Operation Fenkil”–like the May Day Parade of the USSR– are some of the few moments the world is given a glance into the party’s power structure.  Who is invited to the stage–who is present, who is absent–would inform the world who is promoted, demoted, frozen, arrested or exiled.   If the event had been televised, there would not have been the ruling party’s director of organizational affairs Abdella Jaber; or the Minister of Information, Ali Abdu;  or the co-founder of the ruling party, Ramadan Mohammed Nur or any of the other generals that are important or useful props for these events.  Televising the event would have given the world information, thus the cancellation.

Thus, no matter the effort to downplay the “21 January incident”, it appears to have been significant enough to change a 21-year tradition.  Do not be surprised if the regime shows video footage from prior years– just as it did in December 31, 2012 when celebrating the New Year celebrations.