Ethiopia And the Ghosts Of The Ancien-Regime 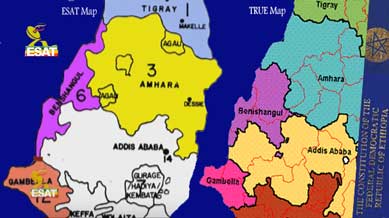 For the last few weeks, a spate of heightened unrest engulfed the Ethiopian Oromiya region protesting against urban encroachment on farmlands and expressing fear instigated by land-grabbing investments. Simultaneously, another unrest was raging in the Amhara region; it is related to the identity demands of the Qmant people. In both areas scores of people lost their lives and many protesters and security personnel were wounded.

Ethiopia just emerged from weeks of demonstration led by students in many localities, mainly in the Oromiya region, where universities and assertively demonstrating students were unheard of until 1991. The recent demonstrations is considered the worst unrest since the 2005 election related riots that claimed the lives of almost 200 people. Reports from Ethiopia indicate that the unrest has now subsided. However, if the grievances that ignited the protests are not resolved, it’s likely that a new cycle of demonstration will flare up again.

The recent unrest focused in the rejection of the  “Addis Ababa Integrated Development Master Plan” which threatened to continue swallowing large swaths of farmlands from the Oromiya region. The fast developing Addis Ababa is the capital city of the Federal Democratic Republic of Ethiopia as well as the capital city of the Oromiya state where it is called Finfine, its original Oromiffa name. Minelik, the king of Shewa had camped with his troops in Finfine for a few years in the late 19th century. In 1891 he became the King of Ethiopia and made Finfine his capital city and renamed it Addis Ababa.

Until 1991, the Oromo people, the most populous nation in Ethiopia, were so much oppressed and lived under the mercy of feudal lords and “Neftegna” settlers who grabbed their lands. Under the ancien-regime, while the Oromo peasants were impoverished, the ruling class and the nobility benefited from their land and toil.

Under the Derg rule (1974-1991) and its policy of “Land to the Tiller”,  the condition of the Ethiopian peasants was marginally improved. However, very soon Ethiopians were ordered to leave their farmlands and be organized as militia forces; tens of thousands of peasants perished fighting in the Derg’s wars in many places, mainly in Eritrea where the people were waging a struggle for self-determination.

In 1991, a joint EPLF (Eritrean) and EPRDF (Ethiopian) force defeated the Derg regime–while the EPLF produced an authoritarian regime, the EPRDF established a broad-based federal government. For the first time in centuries, Ethiopians began to rule their regions and as empowered citizens they started to challenge government decisions and reject policies advanced by elements from the political elite of the country who maintain a strain of right wing tendencies.

The recent demonstrations by the Oromo people who reject the “Addis Ababa Integrated Development Master Plan” is a new phase of Oromo assertiveness as well as the awareness of other Ethiopians in protecting their rights. As of now, the unrest has subsided, however, there remains other issues beyond the master plan that should not be ignored–issues of governance and historic injustices await proper resolution.

The Oromo rejection of the Master plan is understandable considering the fact that in the last twenty years, Addis Ababa has expanded outside its limits so much that it has totally swallowed towns like Dukem. Old vacation spots of Addis Ababa residents, like Bushuftu, have become part of the bustling capital city. In the wake of Addis Ababa’s wild expansion, large swathes of farmlands have disappeared from the landscape; the victims are mainly Oromo farmers.

Naturally, if the Oromo had the upper hand in disposing off their land for their own benefit, much of the problems would have been averted, but the land fell into the hands of real-estate speculators and financial brokers who either swindle the farmers of the real value of their land or systematically evict them from it. The land-grabbing craze that is ignited by the Ethiopian economic growth and the expansion of Addis Ababa has increased the magnitude of corruption and office abuse in the region.

As the national economy grows, it is natural that urbanization will be accelerated, however, the duality of Addis Ababa/Finfine, as a national capital and as a regional capital of the Oromo state complicated the matter. Maybe reorganizing Addis Ababa/Finfine as twin cities, partly administered by the Oromiya region and partly by the Addis Ababa administration would channel income equitably as well as give the two administrations an upper hand in the cultural, environmental and other aspects of the twin cities that they can coordinate to jointly develop.

Much of the fanning of the crisis is carried out on social media by groups with vested interests who do not see a benefit in resolving the issues unless they overthrow the EPRFDF government. Facebook campaigns are full of inciting messages, tickling raw nerves along ethnic and racial lines. In addition, the urge of some young Ethiopians who wish to have a minute of fame by posting anything a cell phone can record has blurred the line between real news and propaganda. Unfortunately, while Ethiopians are facing difficulties at home, and fighting for their constitutional rights, opposition members in Western countries are trying to capitalize on it by fanning the unrest.

Last week, the Ethiopian Broadcasting Corporation (EBC) stated that the Master Plan project office was closed in 2014. The statement accused the officers of issuing periodical press and video statements and related announcements that gave the impression the project office was still in operation. The statement read by EBC indicated that the office doesn’t represent neither the Addis Ababa city administration nor the Oromo region’s administration and that statements and declarations by the defunct project office do not have validity. It further indicated the government’s plan to investigate the matter and  if necessary take legal measures against officials of the Master Plan project office.

Heading north, away from the unrest created by the fear of land-grabbing and in opposition to the master plan, there was another hot spot: a crisis that has been brewing in the areas where the Qmant people live.

Qmant, also known as Agaw-Qmant, reside in the areas around Gonder, mainly to the west and northwest of the city. An ancient people who lived in the area since the biblical times, the Qmant have lived for centuries under segregation and oppression. In addition, the primordial stigma attached to them has hastened the eradication of their culture and religion. Regarded as an ancient Jewish group, according to the 1994 census the Qmant numbered around 174,000, but they were not included in the 2007 census. That exclusion caused the apprehension of the Qmant and signs of unrest began to appear.

While some scholars put the number of Qmat people to around one-million, others consider them part of the Agaw who are estimated to be around five-million people in all of Ethiopia. The Qmant, who live close to the Bete-Israel (known as Falasha) preferred to stay put in their ancestral lands while tens of thousands of Ethiopian Jews were airlifted to Israel; only a few Qmant migrated to Israel.

Over the years, due  to the stigma attached to Qmant, many of them have either adopted the Orthodox religion and Amharic as a language, or  fully assimilated into the Amhara culture of Begemider.

In recent years, the Qmant crisis has attracted the creativity of the Ethiopian Diaspora opposition who were busy fanning that crisis as well. Known proponents of the hegemony and forceful unity that led to the thirty-year bloodshed between Eritreans and Ethiopians are now championing the Qmant rights. Ironically also, the Eritrean ruling party is the major ally and financier of those entities.

Based on the Ethiopian constitution, the Qmant are now recognized as a minority group in Metemma and Chilqa districts of the Amhara region though they are still pursuing a struggle in order to be able to protect and develop their culture in other districts. However, the Qmant should not allow their grievances and their cause to be hijacked by the Diaspora opposition groups.

Recently, the Ethiopian Diaspora opposition claimed that the EPRDF has incorporated major regions of Qmant homelands and other districts to the Benshangul region to deny the  Amhara region access to the Sudan. According to the claim, the Benshangul region now borders both Tigrai and Gambella regions, a design they claim was to encircle the Amhara region and provide control of Benshangul and Gambella to the Tigrai region. The image above shows the map 1) the current state boundaries of Ethiopia, and 2) the map that an Ethiopian Diaspora opposition is spreading. As evident, the genuine federal map shows that the all the regions of Tigrai, Amhara, Oromiya, Gambella and Benshangul maintain borders with Sudan.

For a region that has seen a devastating war over such a map in 1998-2000, map manipulations are very dangerous and are very effective agitation tool when associated with ethnicity. Regardless, many observers expect the parallel security steps and public meetings, as well as the legislative consultations and measures, will extinguish the Ethiopian crisis by finding a lasting solution for it. At the end, the Qmant are likely to have their identity protected and continue to live peacefully in their districts within the Amhara region.

Finally, it is visible that Ethiopia is experiencing serious bangs in developing its federal system and its citizens have become conscious of their rights that they are expressing their objection to government decisions that doesn’t reflect their choices. Ethiopians have reached a stage where citizens cannot be coerced into submission anymore; this is what Ethiopians should celebrate. However, the government should be less heavy-handed and more thrifty with its “terrorism” rhetoric. At the same time, the people should stay within the bounds of the constitution, the law of the land, and pursue their demands in a civil and peaceful manner. Those Ethiopians who have a stake in the affairs of their country should fight for more space to carry out their activities inside Ethiopia. But if they choose to remain professional opposition in the Diaspora, they shouldn’t gamble with the livelihood of Ethiopians for their own selfish political aspirations.