HDI is a qualify of life index which measures factors that contribute to developing human capacity and the conditions for their development: how long and how healthy the lives of citizens are; the quality of their education system; their standard of living; their participation in political and community life; environmental sustainability; and, finally, human security and rights.

What does that mean? I mean the UNDP, and its country representative in Eritrea, is the same one that has been telling us MDG MDG MDG MDG, come and see. This is what the numbers say:

Children born in Eritrea are far less likely to be born to an adolescent mother than in the rest of the less developed world. Compared to children in the rest of low human development countries (mostly Africa), the Eritrean children also have lower than average likelihood of dying as an infant, as do their moms. They are far more likely to be immunized to DTP and measles, far less likely to contract AIDS, and far, far less likely to die from malaria and TB. They have a higher literacy rate, and live a bit longer than other Africans. On the other hand, the children are more likely to be malnourished and have stunted growth; will have far fewer years of schooling than their peers in the rest of Africa, will be far poorer compared to even the poorest countries of the world, will have exiles equaling those of nations-in-war, and will be nationals of a country that is developing at a much slower rate even in comparison to the poorest of the poor.

At 18.5, their median age is comparable to the rest of low development countries, which is 19.5.

Male and female, Eritreans are much more likely to enter the labor force than their counterparts in Africa, although there is a great deal of evidence that the labor force is compulsory. They belong to a country whose government has signed the convention against forced labor in 2000, so it will contradict itself endlessly on the subject: the convention does not apply to conscription of soldiers, so they are soldiers; no, they are not because Eritrea is an oasis of peace, they are in a national development plan, a Marshall Plan which is necessary (but, unlike Marshall Plan, not voluntary), and they are only serving, on average 5 years and we have “quietly” demobilized many, so it is voluntary, really, next question.

Speaking of conventions, whenever Eritrea is joining one, it points out to its non-existent constitution and non-existent proclamation on political organizations and labor laws (because they are written, dammit) as evidence that is a country governed by rule of law and it allows for freedom of assembly.

Africa, as a continent, has the lowest suicide rates than any other continent. But, for male Eritreans, the suicide rate is 25.8/100,000, higher than their counterparts in Africa (15.2/100,000.)  These are, no doubt, the “collateral damage” of Eritrea’s national development which, again, is (in)voluntary and hey, did you see the rows and rows of shiny new trucks and buses that were imported? Hager tHmbeb ala.

How about the gender gap? How are Eritrean girls/women doing compared to Eritrean boy/men? It is all good because Eritrean shares of seats held in parliament by women is 22% which is higher than the African average of 20%. At this point, you might be asking, “what parliament?” This demonstrates your lack of imagination: we don’t have a parliament, but if we did, women would make up 22%. If you persist on using facts-based argument, we have the ever-ready argument that will shut you up for good: women made up 33% of combatants in the armed struggle. So there.

There was an article in either madote or tesfanews which argued that Eritrea is “country run by women.” I tried to argue that we have 18 ministers; only 3 of whom are women; that we have 30 consulates/embassies: only 1 of whom is “run” by a woman; that we have 6 zonal administrators, 0 of whom are women. That we have dozens of Directors, a tiny number of whom are women. This after the EPLF/PFDJ has had a total monopoly of Eritrea’s politico-economic power for 35 years. But my battler won by implying that something about my background (wink) disqualified me from commenting on women’s progress in Eritrea. 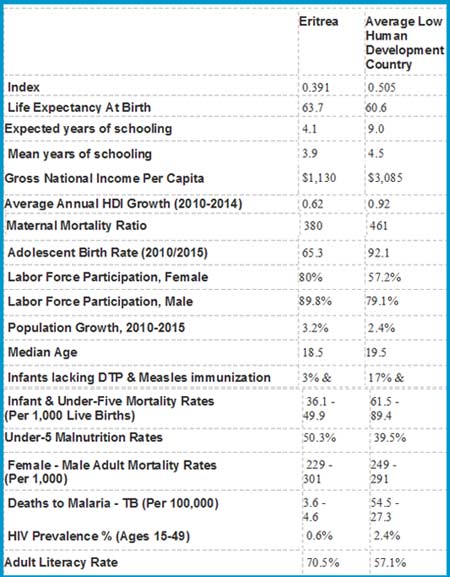 This took me back to 2002 when the Field Marshal of the first “hzbawi mekhete”, Dr. Mussie Misgina, suggested that the Awate Team complaining about girls getting abused at Sawa is because we are against equality for women.  He accused us of being jihadists because we are opposed to girls being raped at a military camp.

It’s time to move on. With this post, I am announcing that I am no longer a member of Awate Team, an agreement reached-upon mutually with my colleagues. What that means is that, going forward, Awate Team and Pencil articles will not reflect my views. The median age of an Eritrean is 18.5. I am, um, significantly older: and the sum total of my experiences barely reflect those of the median Eritrean.   I will retain my post at my rarely-updated Alnahda columns and my jousts at awate forum.

What does my official separation from Awate Team mean?  Let’s see: I will no longer have an excuse not to write the Great Eritrean Novel.  I will no longer have an excuse not to write an anarchic blog about nothing. A seleda.com, reloaded.  An African Huffington Post.  A Las Vegas wedding.  A Mexican divorce.  A youtube channel of The Daily African Show. Translating Monty Python movies.  Translating Kung Fu Panda.  Translating that unreleased Tigrina book I am not supposed to have but dear God it is so good.  Learning Geez.  Unlearning Geez.  A documentary on Eritrean cycling.  The long-promised “Ashekhkat Alem” video game.  Translating “Mi Do Tseba”.  A Royal Carribean Cruise with Yosief Gebrehiwet.  Streamed.  Getting funding for my Ella Ero Liberation Commando Unit. Translating Egyptian play “Shahed Ma Shafs Haga” to English.  Starting “Arabic for Ethiopians” Roseta Stone. A Kuenti-based online supplement store. (Supplements are unregulated.) An uber-service for Qat.  Finding the Eritrean Neo. A movement to eradicate swords from Tigrayit dances. A stand-up comedy tour based on stuff Girma Asmerom says. A dabo kolo delivery service.  The secret recipe of Hajjia Mororo explained.  Interviewing   some Eritrean opposition leaders to show you that they really are smarter than you. Why Chinese architecture is gaudy.  How Eritrea can leapfrog to a Medium Development Country.  A win-win exit strategy for PFDJ.  Building a website that lists all terrible phrases like win-win.   Why Eritrea has two youth movements,YPFDJ and NUEYS, that don’t speak for youth. The Collected Insults of Getachew Reda.  A podcast with Eyob where I list everything Ethiopian government does wrong and listen to him spin it. Why Everybody should listen to Frezghi Mesmer, dammit.  An Eritrean wiki.  Why cats dance when they hear Kris Kross’s “jump jump.” What compels Isaias Afwerki to give a 12 minute answer to a single question. Why do Americans giggle when they hear “Djibouti”?

Will I do any of the things I listed? I don’t have a clue. But with this vacancy, I am hoping that one tiny reason from the gazillion reasons that is holding back the youth from rightfully claiming their place in Eritrean history will be removed.

May your road be white.