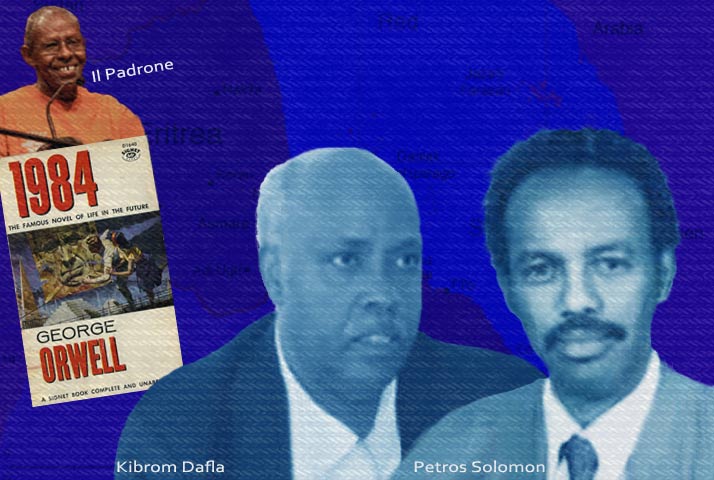 I have seen your pictures and most of you appear to be the age of my daughter. Clearly, it is impossible for me to be angry at you. What I will try to do is share information with you–do what you will with it. The information will focus on the value system of the party you are named after, People’s Front for Democracy & Justice (PFDJ), and how it completely contradicts the value system you cherish or, living in liberal democracies, should cherish. Today’s topic will be “doublethink.”

To understand the party you are named after, PFDJ, you must read George Orwell’s “Nineteen Eighty-Four.” It is about a totalitarian government which controls information, including history, very tightly; is in a constant state of war, naming countries friends and enemies in alternating years; manipulates the populace psychologically–by distracting them with pleasures of the flesh (porn in Orwell’s “1984” and endless dances–“gwayla”– in PFDJ’s Eritrea) and physically, by telling them when to wake up, when to work, when to line up for essentials, when to move (moving permit; remorse letters) and when and how to get coupons from the “fair market” to feed their families but only if they are Eritreans in good standing.  To enable it to do this, it uses “newspeak”–war is peace (we have no problem with Djibouti, we have nothing to do with Ethiopian rebels, we are not helping Somali armed groups), freedom is slavery (Western democracy does not value human dignity), ignorance is strength (you should never read opposition websites and you will be a patriot) –and, my topic for this essay, “doublethink.” I will use a recent article which appeared at Tesfanews.com (a pro-government website) to illustrate this, but let’s first borrow from Orwell to define “doublethink”:

“The power of holding two contradictory beliefs in one’s mind simultaneously, and accepting both of them… To tell deliberate lies while genuinely believing in them, to forget any fact that has become inconvenient, and then, when it becomes necessary again, to draw it back from oblivion for just as long as it is needed, to deny the existence of objective reality and all the while to take account of the reality which one denies—all this is indispensably necessary. Even in using the word doublethink it is necessary to exercise doublethink. For by using the word one admits that one is tampering with reality; by a fresh act of doublethink one erases this knowledge; and so on indefinitely, with the lie always one leap ahead of the truth.“

You know the two contradictory beliefs you hold in your head: we need due process, but Eritrean prisoners don’t.  Ah, but I am embarrassing you and that’s not my intention.  My focus is on PFDJ and not YPFDJ.  Let’s see how doublethink was applied at Tesfanews.com article. (I won’t link to it because I usually don’t link to gutter articles.  Sorry, not sorry.  Plus it is in Tigrinya and I doubt most of you can read it.  No offense.)

The article is the usual “Who Is So-and-So?” that the PFDJ is fond of: whenever an Eritrean dares take a stand against the government, the Oppo-Research Department (as it were) of the PFDJ will be activated and we will immediately learn of totally unverifiable information on the subject.  The more shocking it is, the stickier it is.  The negative bio-research falls under three categories: (1) the subject is really not an Eritrean. His parentage is (always, always) from Ethiopia; (2) the subject is working for Ethiopia, the CIA, Islamists or all of the above; (3) the subject has questionable morals: s/he is a thief, a wanted person, a philanderer, a bastard, a child-abuser, and a homosexual (back when that had some mileage.) Sometimes, if the person is a triple threat, he or she will be accused of all of the above.

The person making the accusation (always online, the new venue for anonymous rumor-mongering) is almost always someone using a screen name; occasionally, we will get the fenj-regach, like the hapless Sophia Tesfamariam (ah, the regrets that await her in her deathbed!) to do it out in the open, but that is very rarely. This is in keeping with PFDJ’s “culture”–they think if they use the word “culture” it gives it some kind of respectability–of disregarding all norms of due process and decency.

Who Is So and So: The MO of PFDJ

On to the article at Tesfanews, the National Enquirer of PFDJ.  In this case, the subject of “Who Is So and So” happens to be Kibrom Dafla, a former member of the Eritrean People’s Liberation Front (EPLF)–you know, the organization whose yellow star you wave at your rallies–the precursor to People’s Front for Democracy & Justice (PFDJ), Eritrea’s ruling party. He left the party–which is to say, given that we are talking about Eritrea and you can’t leave the party and be a civilian minding your own business in the country, he left the country in 2012, a country he spent a lifetime liberating (exactly during the time your parents asked for asylum in Europe and were conceiving you). While with the EPLF, he was in the economic department, stationed in Europe; after independence, he held a series of posts including manager of Himbol, the Treasurer in the Ministry of Finance, and, before he left, the General Manager of Eritrean Airlines.

Look at his bio and I will give you one guess as to what he stands accused of. Exactly.  Your Front is incredibly, boringly, predictable.

Since he left, he has been giving a series of interviews to assenna.com and smerr (Paltalk) expounding on the nature of the PFDJ–his series on why the Eritrean Airlines went defunct was particularly illuminating (listen to it and you will understand why Eritrea will never have a functioning Eritrean Airlines, ever) and he has a show on the Paris-based Radio Erena. All of these the government ignored.  He was only captured by their radar when he became the organizing force behind the movement that interrupted the YPFDJ (your) festival in The Netherlands. He and his team did this by (a) understanding the law of The Netherlands; (b) accurately describing what the Il Padrone (Yemane Gebreab, the guy who comes to lecture you using Marxist lingo he memorized in the 1970s) had said in previous addresses to the YPFDJ (you.)

(1) According to PFDJ “culture”, Minister Petros Solomon is, to borrow another Orwellian term, an “unperson.” A member of the G-15, he hasn’t been heard of since September 18, 2001 when government security officers used another PFDJ “culture”–you are needed or “tdle alekha” as they call it–and hauled him to prison. (I am sure you have heard of his kids, their grandmother, his wife Aster Yohannes’ family (wife also disappeared) making appeals to your conscience that you couldn’t hear over the gwayla songs.)  Since then, he has been the subject of yet another PFDJ culture–establishing guilt not in a court of law but via public opinion which is under the total control of the PFDJ. (And by that I mean one person: Isaias Afwerki.) Since September 18, 2001, his name is mentioned only by, us,  the Eritrean opposition: as far as PFDJ and its apologists (and you, YPFDJ, its satellite) are concerned, he doesn’t exist. He is an “unperson”: erased from history.

(2) The PFDJ, via its chairman (who is also the President of the Republic of Eritrea, which is not a republic), is on record as saying that something everybody knows about–freezing someone by paying him/her wage but giving him/her no job or duties, sometimes for years–doesn’t exist. Freezing, “mdskal” as it is known in Tigrinya, is something I have never heard of, said the president.  In an interview with the media.  With a straight face.

Now on to a translation of an excerpt from “Who Is Kibrom Dafla” which appeared at Eritrea’s National Enquirer, tesfanews.

“…On the eve of [Eritrea’s] independence, Kibrom Dafla was directed to return to the field [from Europe where he was stationed as a procurer for the EPLF’s Economics Department], and he did. At the time, the director of security and intelligence of the Eritrean People’s Liberation Front and a member of its Central Committee was combatant Petros Solomon. Petros Solomon dealt with the issue wisely and told him, “Everybody makes mistakes. But your case might be a bit more grave, because [what you are accused of] is no trivial issue. We didn’t expect you to return to the field. The leadership has accepted the step you have taken [to return to the field.] Until you are told of the outcome, you will remain at Erareb.” And with this, he [Kibrom] received no penalty and no work assignment: he remained frozen for two years.“

How do we know any of this is true? The author of the piece is a certain Zerai Solomon, a name not familiar to the Central Committee. We don’t: and that’s the point. It is deeply ingrained in the “culture” of the PFDJ to malign, defame, isolate “enemies”–none of which require truth. But notice the doublethink: for the purposes of this article, we are allowed to unforget the unperson Petros Solomon and unforget the long-practiced PFDJ tradition of “freezing”–psychological punishment–so that when thawed the person is so grateful he or she becomes an even more zealot party hack. (See also: Ambassador Estifanos.)

What’s important is that once this mission is accomplished–once all of you hate Kibrom Dafla and, by extension, anyone who shares his worldview–you will be asked to do another doublethink: to forget you ever heard of Petros Solomon or that “freezing” of human beings goes on all the time in the party you are named after.

To forget any fact that has become inconvenient, and then, when it becomes necessary again, to draw it back from oblivion for just as long as it is needed….Is this what you signed up for?  Is this the political organization you want to devote your life to?  If all you are in is for Eritrea, Eritrean identity, Eritrean pride, you should know that the gatekeeper for all that isn’t, and can never be, the PFDJ because all it has done since its creation is to suppress, disappear, dehumanize and exile Eritreans.