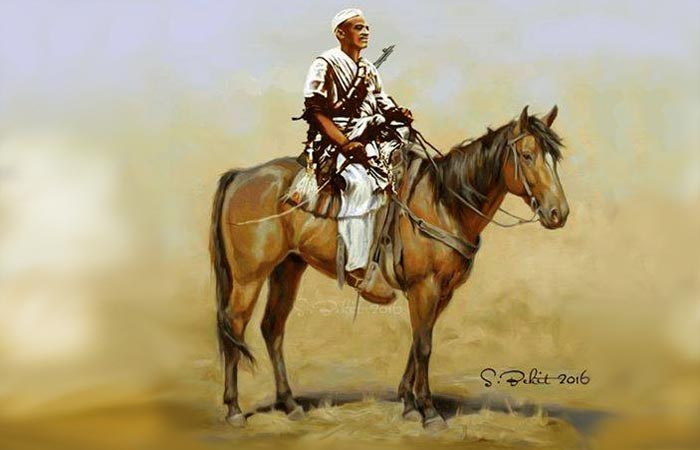 The image we chose today to commemorate the 55th anniversary of September 1, 1961, as well as awate.com’s 16th birthday, is a work by Suleiman Bekhit, the renowned Eritrean-Swedish artist. Of the so many variations of the iconic image of Hamid Idris Awate on a horseback, that we and others produced, Suleiman’s image is the best so far. And we are glad it appeared at a perfect time. We contacted the artit a few days ago and we are thankful to him for giving us the permission to use it.

Suleiman appended a short poem to the image, it’s an Arabic poem composed by the poet Mohammed Hassen on the occasion of the 55th anniversary of September 1. Below is awate.com’s English translation:

Before the rooster climbed to the village roofs
I wrote it on the threshing grounds
In the wings of the bird
And in the ears of grain:
“You will not proceed”
I wrote it with blood and fire
On the face of a bombshell
On the cheeks of the agent
And on the body of the sleeping child

A long time has passed since September 1, 1961; that day, after years of peaceful attempts to regain the freedom of Eritreans ended in failure, Hamid Idris Awate realized that he had to speak with the enemy in the only language that tyrants and dictators understand. He polished his old rifle and went to the mountains and the first bullet that was fired at Mt. Adal heralded the beginning of the heroic, long, and arduous journey of the Eritrean struggle. After thirty years of struggle, on May 24, 1991 the goal of liberating the Eritrean land was achieved, however, the struggle for the liberation of the Eritrean person still rages on.

A long time has also passed since September 1, 2000. On that day sixteen years ago awate.com was launched to contribute to the second phase of the Eritrean struggle, and sixteen years later, it is still steadfastly playing its role: informing, inspiring, and emboldening the forces of good.

September 1 is a landmark that we celebrate with pride together with all: our peace-loving, free spirited, and dignified compatriots. And usually, on September 1, we make announcements of projects we finished, plans we implemented, and future goals that would enable us to better deliver our services. Every September 1 is a dateline where we try hard to achieve even a fraction of our ambitious goals. This year, we have a few exciting that we wanted to inform you about. Unfortunately we will do that in a subsequent message which we hope to publish soon.