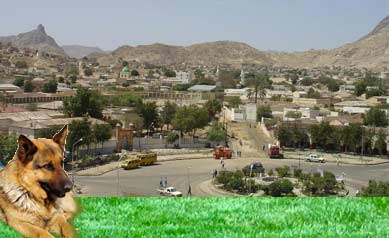 Of Keren and Love Affairs, Negarit Reports from Memory Lane: A Fiction.

Over the years I have captivated my readers with my reports after my travels. This report is also from my travels, but of a different kind: my travels to Memory Lane.

As the twilight rays of the Kerenite sun shimmered from the horizon and landed on the rocks surrounding river Shefshefi I materialized from under the water after I skillfully took a deep dive. With my curly hair plastered onto my forehead, I reflexively squinted my eyes as I made my way on-shore. I briefly thought about Archimedes’ principle and wondered parenthetically at his serendipitous discovery. I glanced to my left when I heard my name from a distance, I could see a willowy figure approaching and covering my eyes with my palm, I recognized my sweet heart, Shaket by her long “shelil” that adorned her lower back.

The Kerenite sun was setting but unlike its sibling- the Badme sun, I was sure the Kerenite sun would rise. Standing on the dirt that was turning to sludge from the water gushing from my “Jelabiya”, I stood motionless as if the little chillier than normal water has frozen me. But I was frozen for a different reason: the bad news that I was going to reveal to Shaket. I knew her heart will be broken, but I also knew that if I did not act now more hearts will be broken as I dithered vacillating between my two loves and I decided that today was the day I summoned the courage after I felt both invigorated and rejuvenated by my plunge. I made a habit of taking a plunge in the river whenever I am debating with myself, but this one was unique as it was to savor my last night and a sort of valediction to my hometown of Keren.

She was walking slowly, but confidently towards me, her frowning face reminded me about our first argument when I asked her to cut her “shelil” before we visited Asmara.

Succumbing to peer pressure I wanted her to act like an Asmarino temporarily, but she rebutted by tersely saying “shamiye, wo egliiye lefete shelilye y’abbe”. After exchanging pleasantries in Tigrinya, Tigrayit, Blen and Arabic. I grudgingly revealed that I was in love with someone else and profusely apologized for cheating on my true love. I told her that tonight will be my last in Keren before I commenced my odyssey to my true love. She was devastated, but managed to ask me if she knew my true love. I replied that she indeed knows her and one day she will fall in love with her too. I also coyly added that my true love is also the true love of her older brother, Tekie. I did not want to linger longer. And before she recovered from the twin bomb-shells, I picked up my belongings and walked away. She called my name with all its endearment versions, but I never looked back as if I was warned that I will turn into a pillar of salt if I did.

She run past me and blocked my way, sprawling her hands to stop me and coquettishly lifted her skirt to expose her gorgeous lower thigh, unflinching I made an L-Turn instead of the much easier U-Turn and proceeded. Back in the golden days of turns people made L-Turns to transcend an obstacle and made a U-Turn only when they were lost and discovered that they were heading the wrong direction, then they would narrate with excruciating detail about their “shukushuka” experience and the lessons they gleaned to use for their next expeditions.

Nowadays in our gratification seeking culture people make all kinds of turns for pleasure and blame the “abberabreni e’mo kQawem” crowd for their “shukushuka”. It will not surprise me if soon U-Turns become part of the Toronto Marathon. This was the night I made the long journey to Ghedli like many young sons and daughter of Eritrea, my first and true love.

During the long walk to prepare for the strenuous journey to endure the love of my true love, I remembered how in our first week of our romance, what looked like an army of crazy men chased us, Shaket run like a sprinter, I witnessed those long legs galloping and her “shelil” oscillating rhythmically from right to left as I puffed and huffed from behind. It was apparent that I would be caught by these crazy men and in a last ditch effort I called my dog, “Ambess”, who at the snap of fingers chased my chasers. When I looked back and heard the crazy men yelling “saahibey derrebbo neti kelbi” I knew that they were not from Keren, they were visitors who came for the “Mariam DeArtit mai Chelot and Akat”

Thanks to my dog, Keren was liberated from crazy men long time ago until it was occupied again by more crazy men and women in 1991. “Ambess” true to his Kerenite pedigree spoke several languages and if someone knocked on our door we knew from his barking if the visitor was an Asmarino, Kerenite or even “Torserawit.”

Since that shattering defeat in the forced Marathon of Keren I never took running even after science has proved that it is good for my health, but I unfailingly find that my huffing and puffing are only manifested when I run after my friends and loved ones, ascertaining that my heart is very healthy. But when running after my enemies I am unrelenting and unstoppable, sometimes this whirlwind speed works against me as I ran too fast and overtake my enemies and I get stubbed from the back. Because I dawdled behind Shaket, I developed a third measurement system.

While most people are crippled with the British or Metric systems, I have at my disposal the “shelil” system. When I am working around the house I think and measure in the “shelil” system. This system offers me precision as the exact length is indelibly seared into my memory as is everything about Keren. I also discovered that the time it took for the “shelil” to oscillate 10 times is exactly the number of minutes it takes me to finish one cigarette “bshahi akkafikha”.

Many people including close friends believe that I sketched the Awate.com logo on the back of a napkin or on the back of my cigarette packaging, but the fact is I blew life into it on nine consecutive cups of black tea. Tee-totaling that I am, I meticulously arranged nine tea cups and drizzled steaming tea on each one of them, then I shouted the Tigirinya and Arabic logos into each one, finally I combined the contents of all the cups into a bigger container and stirred it for harmony. The beautiful tapestry of both languages staring back at you with none of them imposing or grubbing is the result of that unique creativity. This logo is deep and I envisioned it while taking a symbolic annual plunge into my outdoor swimming pool in memory of Keren, a city that gave my generation the love of Eritrea.

If you ever wondered why almost every article I write and almost every conversation I have veers to Keren, your riddle has been solved. Everything veers to Kerene. Even if I talk and write about keren it veers to Keren. That is the power of Keren, “a Midland” town that glues everything together. “Right” and “Left” can co-exist without killing each other is one of the messages, but there are other salient messages embedded.