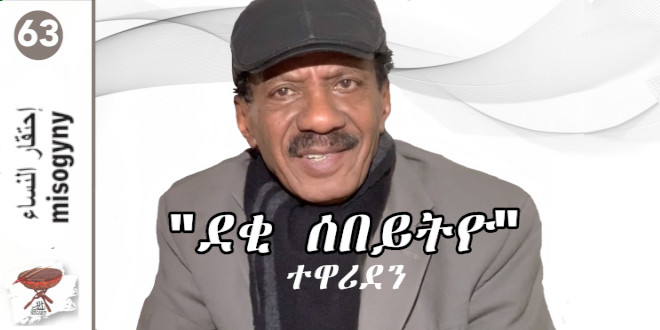 Since childhood, young Eritreans are ordered by their parents to stay outside the room because they should not listen to the conversations of the elders. They stay outside the room sometimes facing harsh weather. Okay, in some cases that could be appropriate. But that should not be the way we treat children forever. Certainly there are youngsters with bad behavior, but defining the entire younger generation by the bad apples among them, generalization, is not productive.

The energy of our youth is amazing—sometimes it makes you wish you could travel a few decades back in time. And that energy makes me feel we are getting closer towards achieving our goals. It gives me hope. The young should be encouraged, but selectively. Do not coach rascals. Target those who are behaved, decent, respectful and have a sense of belonging to their nation, to the ideals of justice and freedom,  and respect the rights of citizens.

Of course, sometimes we make bad judgements. We mentor youngsters hoping they will be a good addition to the struggle for justice. But some of them surprise us with behaviors we didn’t expect. I have such experience with two persons, but mentioning names is not needed. I mentored two young men and then they turned back to bite me. It’s like the snake that we call ‘Mendelay’. A small black snake that seems to move in two opposite directions. You could be running after it with a stick and suddenly it turns its direction towards you and bites you. It’s like the “Lottorina”, a tram that moves in both directions. I wasted so much time mentoring them, encouraging them and explaining the intricacies and other things they did’t know because of their age and experience. Their prejudices and bigotry they came with was so heavy and they couldn’t rid themselves of it.

However, we have to be careful of stereotyping. It is not fair because many of them, those I consider my friends and allies, are very conscious, aware, bright, dedicated, and they give me hope. But I think they need to have more clarity, clarity, and clarity. I am saying it three times and I can’t emphasize it enough.

Now to my younger friends: Strive to be the best at what you do. Aim for excellence in your life and never forget your less fortunate compatriots at home. Work hard to bring their sufferings to an end. But here, you need wisdom… and don’t believe anyone who tells you wisdom comes with age. Not necessarily. On the contrary, we have many examples of people who lose wisdom with age—look at the PFDJ!

Wisdom is something you learn and you can learn it quicker if you are humble enough to learn while maintaining your integrity. Even if we assume you are not wise, it’s like… Alcoholics Anonymous, you can rehabilitate yourself, shed off the bad habits and voila, be wise. Most importantly, stay clean of archaic, medieval thinking. Stay very far from that. You have better eyeglasses to see the different perspectives of the times, and how the world is advancing and living while the foolish among us are busy building narrow, suffocating fences. You can do way better than that. Armed with clarity and espousing natural progressive, modernist views, makes those views part of your character and attitude. Just pursue clear goals with tenacity, with integrity, with care for yourself, your people, and humanity at large. And you can hasten the time of the relief for all our people.

Women and Their Never-ending Plight

Most of the insults I get is in fact an exhibit that our culture hold Women in low esteem: Wedi Sbeyti (Son of a woman—a very degrading insult in our culture), Wedi….. (fill the gaps, it is vulgar to say, again the target are women) etc. Habitually, women are the nucleus of our insults even when the insulted are men. Our culture does not insult fathers, but heap their insults on the mother. Why is that?

Sometimes one wonders if such people have mothers and sisters at all. Maybe they don’t, maybe they were born in test tubes, inside a “Brlle”, the traditional wine flask–since we do not have test tube technology. Why so much misogynist insults?

Abyssinian are just like the Arabs who hold their women in a very low esteem. Didn’t I tell you “Habesha” have the same cultural traits as the Saudis in the way they despise women! Check this: the extremists of the Arabs and our Habesha (Abyssinian) extremists have a symbiotic connection though they deny it. They have the same attitude towards women and towards freedom, and in their love of dictators. Ufffffff

To The Veteran Activists

My friends, you have seen a lot, went through a lot, faced distractions, defamations, and attacks on many occasions, but you stayed the course, patiently. You were betrayed by your colleagues, the PFDJ clique. However, you are still treading the bumpy road in quest of freedom and justice for your people and country. All respect to you. Now I appeal to you to help the young because the challenges they are facing are tougher—even when they are free from the PFDJ control, they are facing never-ending emotional and confusing propaganda. They are being targeted to make them lose their self-confidence and give up on their people and country. But most of them have the tenacity, if not they can easily acquire it, but they need our genuine support and honest encouragement.

And for the woman, you know the status of women in societies like ours! It is time to fight it face on, away from emotions and tired rhetoric. It’s time women who achieved something are portrayed and promoted with honor to be an inspiration and an example for the younger girls to emulate. It’s time we all face and fight sexist pronouncements in unison. We have to make sure that the despicable belittling and disrespecting of women stops. People who don’t respect theirs mothers and sisters are not part of us—but an outgrowth. A person who doesn’t love his people and country has no place among us. A person who lives in a narrow regional and racist enclave, and belittles women, disrespects our struggle for justice and freedom, is not one of us.

We should keep dreaming and struggling to have a proud Eritrean citizen who can live in his country with dignity—our people do not have to risk crossing deserts and seas in search of freedom which they should naturally enjoy in their country. We must strive for that goal with determination, and anyone who doesn’t ascribe to that is a plague. It’s a plague that has to be either fumigated or distanced.