Posted on December 2, 2019 by Ahmeddin Osman in Articles 36 Comments 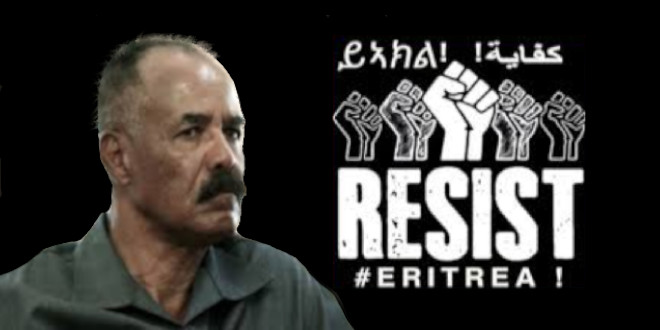 For many years the international community has repeatedly condemned the PFDJ regime for continuing to commit systematic, widespread and gross human rights violations against his people. Our Eritrean intellectuals including previous supporters of the regime have realized that Isaias is a paranoid, narcissistic, power-hungry, and vain leader who would not accept any type of reforms whatsoever and that must fall.

While there is a sense of frustration with the historical opposition groups failing to achieve any significant breakthrough towards bringing change, we now see an increased number of organized civil rights movements such as ‘#Yiakl’ and others dominating the social media outlets. Their efforts are commendable for raising awareness, mobilizing grassroots, and calling for an end to the repressive regime in Eritrea.

I would like to stress here that the  vast majority of sections of our society in Akhria, Keren , Massawa, Aqurdat, and Senafe who had said enough, ‘Kifaya’ , to the oppressive regime decades ago, are exhilarated to see the rest of our people in  ‘Highland’  are catching up. As a ‘Lowlanders’, I am much more optimistic than ever before about the imminent fall of Isaias’ regime, that the ‘Highlanders’ have finally joined the ‘Lowlanders’ in monumental numbers. Having said that, I remain deeply suspicious of any future change that is brought by ‘Highlanders.’   I believe that the change, as I see it, would only replace the current tyranny of the dictator Isaias, by a tyranny of the majority of ‘Highlanders.’

The ‘Lowlanders’ have been raising issues that need urgent national consensus before the fall of the PFDJ regime. These issues have been repeatedly dismissed by the ‘Highlanders’ openly in social media and they labelled it as ‘unpatriotic’, ‘separatist’, ‘Islamist’, so on so forth.  The issues  which I will highlight below, are not being addressed by what the ‘Highlanders’ ultimately hope to achieve: changing the current regime, followed by creating a new transitional government, publishing a draft constitution, holding a referendum, conducting an elections , and handing over power continuing a majority rule. As a ‘Lowlander’ I strongly believe that if the PFDJ falls in the next two years, hopefully sooner, the majority in power would then be the ‘Highlanders’ who would end up imposing inequitable laws and policies. If this were only what the ‘Highlanders’ are aiming to achieve without tackling key national issues that the unity of our nation depends on, then the backlash from ‘Lowlanders’ would be colossal, and they would have no choice but to fight fiercely together to demand their rights. This would inevitably lead to civil war, humanitarian crises, repression and risk of  state failure. Let’s not wait for another decade or two to grasp this conundrum.

I invite all the ‘Highlanders’ intellectuals and activists to have a deep understanding of the meaning of Eritrea which is a diverse country with ethnic, regional and religious divisions, and with no rule of law or democracy.  If we want to achieve a peaceful democratic transition, and a lasting stability, peace and economic prosperity, we must  get together now and address issues of rights and freedoms from all Eritrean perspectives, ‘Lowlanders’ and ‘Highlanders’.

The ‘Lowlanders’, a term I use here refers to all people in Eritrea that do not refer themselves as Tigrinian, will keep flagging up the following key questions that must be addressed by all political and  civil organizations:

I encourage all to pause, think and plan beyond  the fall of Isaias and beyond ‘#Yiakl’.