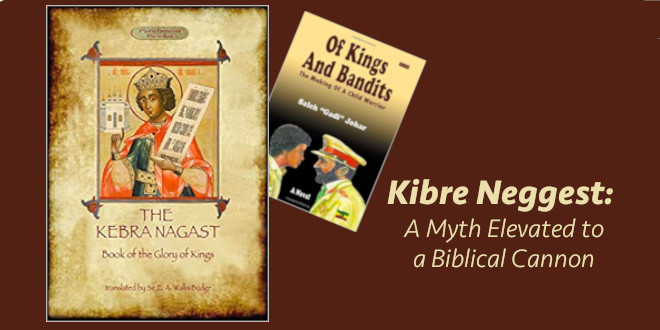 There is no piece of fiction that shaped the Abyssinian psyche the way Kibre Neggest did. A product of the 13th century, many Abyssinians  accept it as an authentic narration of actual history that equates the birth of Minelik (corrupted Arabic Ibn Al Malik or Hebrew Bin Melech – מֶלֶךְ ) with the birth of Jesus Christ. The narration begins with the legendary “romance”  between King Solomon (as per the Bible) and Prophet Solomon (according to the Quran) and the “Queen of Sheba” (Belqis as per the Quraanic legend, and Makeda, as per the Axumite legend. The book was conceived to justify the usurpation of power (from then Zagew dynasty) by warlords of the Solomonic dynasty (claiming lineage to Solomon) that ruled for 700 years before it ended with the overthrow of Emperor Haile Sellassie in 1974. The following is an extract from my book “Of Kings and Bandits” that can be found on Amazon Kindle here.

Today and tomorrow is the 49th anniversary of the Besekdira massacre (250 villagers killed on Nov, 30, 1970) and Ona (596 villagers killed on Dec. 1st, 1970). Both villages are in the environs of Keren, Eritrea. The villagers were brutally massacred and their villages razed to the ground by the bloody regime of Haile Selassie, the last king of the Solomonic dynasty. (Saleh “Gadi” Johar)
____________

…Neither did Mokria discover any while reading the captivating stories of kings, “stories over two-thousand years old,” as Mergheta Kndye explained. His father was right. In the book, Mokria found the mythical origin of Janhoi, straight from the veins of King Solomon and Queen of Sheba. It was there written in black ink with illustrations, colorful pictures of people with eyes so big they occupied half their faces. Here was a woman with a crown on her head lying down with open legs, a man with a crown on his head on top of her—a painting depicting Janhoi’s ancestors fornicating! Then the two royals drink wine from golden cups after the act. King Solomon and the Queen of Sheba had just produced the future Minelik, Mergheta had told him. On the next page the Queen of Sheba headed back home to Abyssinia. Next, there is another painting of the queen giving birth to Minelik on the banks of the Maibela Creek. Mokria thought it only natural that Janhoi, the present king, should belong to such a couple and such an affair, though the painting didn’t depict the event.

Mergheta Kndye would never mention the Kebre Neggest as the work of a fourteenth-century genius, an Egyptian Coptic priest. Having grown up feeding on the same myths himself, just like Mokria, maybe he believed every bit of it.

Chaos, the defining factor of Abyssinia for too long, needed a solution, and the Egyptian priest had come with a rescue. He produced a perfect myth, he authored Kebre Neggest, Glory of Kings—a lore on whose pages retroactively created legends fit together like bricks in a wall—to explain the present and stabilize the future. It connected the bloodline of the many Abyssinian kings, the Janhois, to that of Solomon, the Israelite king.

The Kebre Neggest, initially written in Arabic, had been translated into Geez, the language of the Axumite Kingdom, the only kingdom that created an indigenous African alphabet. This was long before “Solomonic” kings usurped legitimacy to the throne—long before the Kebre Neggest was conceived, impregnated with a mishmash of fables, generously sprinkled with scriptures from the Bible and the Koran, and embellished with ancient pornography—retroactively producing a mythical king Minelik, son of King Solomon, so that future kings including Haile Sellassie, the Janhoi, could claim a title, Elect of God.

Apparently, the Solomonic bloodline had disappeared midway. It had been eradicated from Axum and replaced by the Zagwe Dynasty that ruled Abyssinia for decades. But not before one keeper of the gene had escaped with Solomon’s blood in his veins, according to the fables of Kebre Neggest. The bloodline survived in Shoa for centuries and appeared in the veins of Yekuno-Amlak, a Janhoi who suddenly came to the picture thanks to the consultation of the Kebre Neggest. The clergy crowned the lost gene-carrier King of Abyssinia on a throne that a Zagwe king abdicated voluntarily, according to the Kebre Neggest; he must have considered his blood less worthy than a Solomonic progeny. The Zagwe king, offspring of the great architects and builders of the rock-hewn churches of Lallibela, abdicated to the lost-and-found peasant Yokuno-Amlak. But Mokria never questioned the fables.

He trusted the Kebre Neggest which said that centuries later, again, some king by the name of Sahle-Sellassie magically proved his Solomonic DNA. As designed, the Kebre Neggest’s attempt to put an end to the power struggle among the nobility, to establish a legitimate condition to assume the throne, succeeded. Janhoi Sahle-Sellassie became the king of Abyssinia. Of course, Haile Sellasie could also plump a bloodline. He did. And he became Janhoi.

Gobezie saw it differently. He considered the Kebre Neggest a mythology that was elevated to the status of a canon and a religious doctrine, came with a great expense and had a profoundly negative effect on the non-Christian people of the region. It immersed Abyssinia into a fanatic theocracy. It crippled scholarship. It blocked enlightenment. It established the absolute power of the church over the state. Abyssinians barricaded themselves in their mountains for centuries, and every time they peeked to the outside world, they found themselves lagging far behind. Giving up on advancement, they retreated, back to the mountains, back to isolation, and engaged in their favorite pastime: bloodletting and pillaging. They effectively built an isolation wall around their country.

Unlike Mokria, Gobezie had learned about it from the perspective of his rebellious uncle, not from the perspective of his father or Mergheta Kndye. Thus, the two brothers were molded into different characters. One looking to the open space and wistful that his country would enjoy justice and fairness, to grow wings and fly; another looking at the Wehni mountaintop, the prison, and wishing he could roll the entire country and quarantine it there, and he, Mokria, would stand guard from where his grandfather stood.