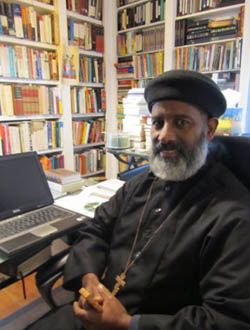 Mr. Yemane Gebreab, a high official of the ruling party in Eritrea and who often speaks on the government’s behalf, is touring three US cities – Seattle, Atlanta and Washington DC. As was seen in the meeting he held for party members in Seattle on Saturday, May 18, 2013, his main target again is none other than the Eritrean Orthodox Church. It is to be recalled that the Eritrean Orthodox Churches and the priests in these cities were subjected to virulent attacks by the government of Eritrea through radio messages orchestrated from its embassy in Washington DC back in 2007.

Mr. Yemane’s message to his party members in Seattle was simple. It goes something like this: Eritrea has now won its independence. The Orthodox Church has also become “independent.” Therefore, it does not need to have any relationship with the Coptic Orthodox Church. Mr. Yemane goes on to announce the governments most egregious restrictions over doctrinal and worship matters by declaring that the Eritrean Orthodox Church, which has remained under the government’s complete control, no longer recognizes a tabot from Egypt. The tabot is a facsimile of the arc of the covenant without which an Orthodox Church cannot be consecrated. This is now the Eritrean government’s promulgation (policy) on the tabot, as clearly enunciated by Mr. Yamane.

What is sad for Orthodox Christians in Eritrea is that this is not the first time that non-Orthodox officials of the ruling party have so brazenly appointed themselves as spokespersons for the Eritrean Orthodox Church and intruded in its ecclesiastical affairs. Mr. Yemane, it should be noted, is a convert in his youth to a small evangelical church (Faith Mission), now declared illegal by the government he represents. Mr. Ali Abdu, the former information minister who has recently defected, Mr Tsehaye Fasil, a Lutheran and who until recent times served the government at the Embassy in Washington DC, Ms. Sophia Tesfamariam, a Roman Catholic, and Dr. Gideon Asmerom, a Seventh Day Adventist (the latter two being unofficial spokespersons to the government of Eritrea) have all committed similar acts of behaving as if they could, with impunity, speak for the Orthodox Church at one time or another.

Using the logic of “Eritrea-is-now-independent”, is the government now going to force the Orthodox Church to eliminate any mention of the Coptic Church and our historic Alexandrian Church Fathers and saints from our liturgy (qdassie)? Will the ruling regime now proceed to provide the Eritrean Orthodox Church with its own list of saints that are “approved”  by the ruling party? Just as importantly, using the same argument to its logical conclusion, will Mr. Yemane’s government now put the same maniacal intrusion into the Catholic Church’s historic relationship with the Vatican?

The government has already committed the following flagrant abuses against the Orthodox Church: (1) deposed the church’s canonical patriarch, H.H. Abune Antonios, kept him under detention for the past seven years, and placed a false-patriarch on the patriarchal throne (2) Imprisoned numerous clergies of the churches (3) forcibly conscripted priests, monks and deacons  into the army in their thousands, and (4) isolated the Eritrean Orthodox Church from all the Churches that are in communion with it – the Oriental Orthodox Churches and the See of St. Mark.

The government Mr. Yemane represents now takes its abuse of the Eritrean Orthodox Church by forcing it to severe its historic link and identity, as well as its apostolic chain of succession to the See of St. Mark (menbere markos). By doing so, it expects to gut and erase the heart and soul of our Orthodox existence and heritage?

Eritrea’s independence, for which scores of thousands of Orthodox Christians, as did so many from other Eritrean faith communities, have paid the ultimate price is barely twenty years old. During this brief period of existence, Eritrea has known only one president. The Orthodox Church’s heritage and link to the Coptic Church and the See of St. Mark (menbere markos), on the other hand, has had a 1700 year-long-and-deep relations. In fact, until the 1950s, the Coptic and Eritrean/Ethiopian Orthodox people existed under a single Holy Synod. We have had the same 116 patriarchs since St. Mark, our first patriarch.

It is, therefore, with the above in mind that:

I call on all followers of Eritrean Orthodox Church to stand firm and united to resolutely resist the Government of Eritrea’s yet another egregious intrusion into the ecclesiastical affairs of the church. The defense of our faith and church today becomes the duty of every Orthodox.

I call on all the clergy of the Eritrean Orthodox Church to take a bold and united stand and say “Enough!” to the government’s total control and manipulation of the church for its own political ends.

I also call on all friends of the Eritrean Orthodox Church – Eritreans and non-Eritreans – to stand in solidarity with the church in captivity during this trying period.

“Righteousness and justice are the foundation of God’s throne” – Psalms 97:2