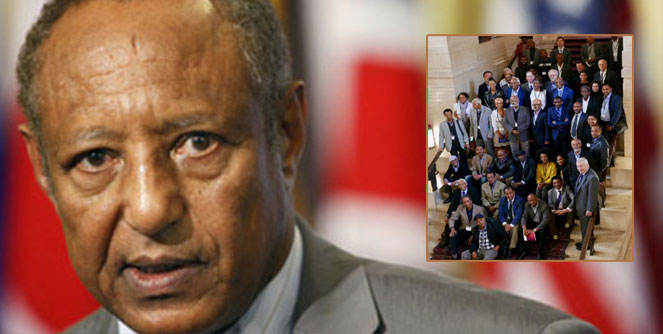 A two-day conference on Eritrea was held in London, U.K., from 24-25 April 2019. It was jointly organized by an NGO group called Eritrea Focus and the Institute of Commonwealth Studies. The organizers invited a group of non-Eritreans and others from the Eritrean Diaspora.

According to its website, Eritrea Focus is an association of Non-Governmental Organizations (NGOs) working in the areas of human rights. It states that it is “funded through voluntary donation from members and publishes its statutory accounts annually.” However, it does not say where its annual report or financial disclosures are published or can be obtained.

The Institute of Commonwealth Studies, affiliated with the London University, is a postgraduate academic institution specializing in the study of the Commonwealth.  As normally expected, no formal call for papers was sent out to the Eritrean academic community to solicit input and papers for the conference. Thus, the institute’s role in the selections of delegates unknown.

The Eritrean public knew the participants from a group-photo taken at the end of the conference.

In covering the conference, BBC Tigrinya interviewed one of the participants, Dr. Bereket Habte Selassie, for about an hour on a range of issues.

When asked what the purpose of the conference was, Dr. Bereket said: “according to the organizers, the purpose was to answer the question of whether democracy works in Africa, and if does not, what are the reasons for its failure.”

To contrast the glaring lack of diversity of the participants, though belied by token representation, in this and other conferences, the BBC reporter referenced the Eritrean National Council for Democratic Change’s (ENCDC) recent congress, which was held  after a long hiatus, and incorrectly stated that it has elected a leadership council that, except for one, is entirely made up of Muslims.  The reporter asked Dr. Bereket for his view on why the participants of the London conference were mostly Christians and why the organizers excluded ELF supporters.  Dr. Bereket said, “I do not think it was done by design. I personally know some participants who are from ELF or its sympathizers… yes, it is true that they were mostly Tigrinya speaking and Christians. As for the other recent meetings you mentioned, I am not aware that the participants or elected leaders were mostly Muslims.  If that is the case, it is wrong in my opinion.”

The reporter again pressed on “how can this problem of exclusionary practices be remedied… this is not the first time that certain groups exclude one region or group … why are these kinds of divisions occurring? Do not you think these kinds of practices are creating rifts and exacerbating divisions in our society? How can we get rid of it?  How can unity be archived.”

The reporter’s attempts to highlight the lingering polarizing impacts of such conferences have on the Eritrean society was not successful. Dr. Bereket skipped the first part of the question and said that ‘unity can only be archived when there is a sound base for it … it can only come by those fighters, both Christians and Muslims, who brought about independence … even their leaders, even though we criticize them for certain things, they united Christians and Muslims, lowlanders and highlands and achieved victory but failed to live up to our expectations and that is the biggest question of our times.”

On the day of the conference, the organizers issued a press release that billed Ambassador Haile Menkerios as a keynote speaker when in fact, according to our sources, he already had notified the organizers days before the event that he would not be attending. The press release advertised that Ambassador Menkerios will be speaking at the conference.

Gedab News reached out to Ambassador Haile Menkerios to clarify his role, if any, in organizing, funding, or participating in the conference and to dispel any impressions the organizers might have created in the social media. In a phone conversation, Ambassador Haile stated that he was asked to participate in the conference, but did not attend due to a scheduling conflict. Instead, he sent a note of support, as he would to any pro-change group, to express his wishes in promoting discussions that focus on the need for building democracy in Eritrea.

He also emphasized that, as an independent concerned Eritrean, his wish is to support the unity and not division of Eritreans.

When asked about the lack of diverse representations required to build any semblance of democracy, he said he did not know anything about the organization of the conference. Nor did he have any role in organizing it.

Another invitee who declined to attend told Gedab News, “I declined to attend for many reasons… one of which is the usual lack of transparency and the use of deceptive tactics to promote a narrow agenda under the disguise of building democracy while decrying the Eritrean regime’s lack of transparency. He further added, “like many past organizers, who loudly call for accountability and full disclosure,  they [organizers] sadly will not acknowledge a mistake was made in selecting participants … nor would they learn from it and the harm they are causing… this is an ugly and a divisive side of Eritrean politics that only benefit donor NGOs.”