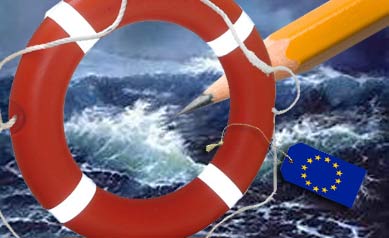 Many who would simply explain European policies on Africa as “neo-colonialism” are generally dismissed as paranoid or overly skeptical by those who want to portray themselves as “rational, refined and objective” thinkers. But given the European adventures in dealing with the many crises in Africa, even those who claim rationality are tempted to join the group that sees any European move as an advancement of neo-colonialism. This is quite evident among many Eritreans.

European policy towards Eritrea suffers from tunnel vision, and mainly focuses on refugee issues at destination. It could also be described as a selfish and a reckless policy. But not to be grouped with the paranoid, we would just stick to European policies of the last decade during which European governments chose to close their eyes and continued appeasing the Eritrean tyrant and his hostile single ruling party.

Europe has directly and indirectly empowered the Eritrean regime and in the process has inflicted severe damages to the cause of those who struggle to bring an end to the appalling human rights conditions in their country.

Governments have the right to pursue policies that are commensurate to their self interest; but looking at the crisis solely through selfish prism is not in line with the modern general European public values. In pursuing their selfish national interest, European governments have been trampling over the struggle of the beleaguered Eritrean people. This has worsened since Italy’s Silvio Berlusconi began to lead the rapprochement gamble with the Eritrean regime over eight years ago; this year, we saw Italy’s Deputy Minister of Foreign Affairs, Lapo Pistelli still traveling on the same dead-end road of rapprochement. Several other European governments have been advised to pursue the same bankrupt policy by the misguided political NGOs, the sub-contractors of European foreign policy on Eritrea.

We understand that Europe has a social and political problem caused by the influx of huge numbers of refugees and asylum seekers flooding its shores from unstable countries. Naturally, Europe wants to limit its intake of immigrants to safeguard its national security interests. But in solving those problems that need to be solved by addressing the root causes, Europe has been avoiding the cause and looking at the root and trying to give life to a poisoned tree by providing drops of water. How else can one explain the frantic movement to reform the corrupt Eritrean regime by continuously volunteering to provide it with a lifebuoy? European governments, particularly Italian diplomats, are working hard to convince the regime to use their lifeboat.

We have bad experience with the flirting of Louis Michel with Isaias Afwerki and his destructive attempts to salvage the sinking Eritrean regime and contributed in helping it stay alive this long. As if the diplomatic flirting was not enough, some EU countries unleashed their well-funded foreign policy sub-contractors to wreak havoc among the Eritrean resistance forces. European NGOs are involved in king making projects in case the regime fails.

Recently the Danish immigration department depended on foreign entities and only one named person outside Eritrea in preparing its xenophobic and now disgraced report. Recently a British Foreign and Home Offices delegation travelled to Asmara to talk with the Eritrean regime about migration and human trafficking! Some other countries might do the same. And the feel-good exercises will continue.

Here we would like to volunteer some advice to European immigration authorities:

In the meantime, Eritreans will remain apprehensive of the West that never thought of punishing the Eritrean regime for what it does to its people; it is always punished when it ventures outside its national boundaries and engage in activities that mainly annoy Western countries.

Recognizing that the Eritrean regime is the cause of all instability in Eritrea would save Europe and others the trouble of carrying out further research and fact finding missions. A regime that is condemned by all major international entities, including Amnesty International and Human Rights Watch, an oppressive regime that is rejected by its people and is only surviving with the power of the gun doesn’t deserve to be saved. Instead, it should be encouraged to drown in its own messy pond. A regime that has been pushing its youth to desperate measures doesn’t need to be saved, it needs to be removed. Only then will the influx of refugees and asylum seekers from Eritrea be stopped.

Politicians should know that Eritrean is a diverse country and its resistance forces reflect that diversity. It is obvious that the regime’s view is on one extreme and the resistance is on the other. In the middle, there are individuals with vested interest, middle sleepers, opportunists, merchants of crisis, NGOs that masquerade as promoters of this or that lofty ideal, and mediocre intellectuals who are not sure where they should stand and with whom they should ally themselves. Anyone who dismisses the views of any of the two extremes is simply unqualified for any task of reforming the regime or helping resolve the problems that led to the Eritrean predicament.

While the European governments have no problem trying to save the oppressive Eritrean regime, they tend to dismiss the organized parties in the resistance forces. Instead, they depend on freelancers who have proved, time and again, they have no clue about the real problems. The typical wishy-washy opportunists are the only endorsed reference of the European governments because they are nominated by the sub-contracted NGOs who act as partisan rivals among Eritreans. Unfortunately, the very people they are courting espouse hyper nationalistic jingoism as a means of restoring lost glories with hostile attitudes towards neighboring countries, attitudes that are no different than those of the current regime. They exhibit animosity towards other Eritrean resistance forces, have little tolerance for competing views, lack democratic credentials to meet the aspiration of Eritreans suffering under the yoke of tyranny, and have failed to reform themselves. In short, they are ill-suited to promote peace and stability in the region. However, some NGOs who have been acting as kingmakers and stealth manipulators, wreaking havoc among the resistance forces, would not change course, and as a result, they have lost credibility as objective interlocutors despite the noble slogans they repeat.

Europe could help itself and Eritreans by recognizing that the Eritrean regime is too corrupt to be salvaged. Trying to reform it is futile. Europe could also help itself and Eritreans by recognizing that the Eritrean resistance forces, (not selective groups) should not be left in the cold because the long term risk of excluding and marginalizing them may prove to be disastrous in the future. Europe needs to recognize that Eritrea lies in a very volatile region and in this age where lethal groups emerge out of nowhere to destroy nations, it is prudent to realize that Eritrea is not immune to that kind of damaging growth. Strategic planners and entities interested in the well-being of Eritreans should deal with their predicament prudently–resistance forces should not be pushed to the corner and fall prey to unwanted influences.

Finally, we hope European governments recognize the gravity of the situation; cajoling the Eritrean regime while at the same time dismissing the resistance forces and substituting their representation to small groups and individuals will only yield serious consequences. To rescue Eritrea and Eritreans, it is a must that the idea of salvaging the Eritrean regime is completely rejected before embarking on the right path towards solving the Eritrean problem related to governance, to safeguarding their human rights, and ending their oppression. Importantly, for Europe, it is the first step towards stopping the supply line that is flooding Europe with refugees and asylum seekers from Eritrea.