Isaias’ Eritrea: No Official Is Safe 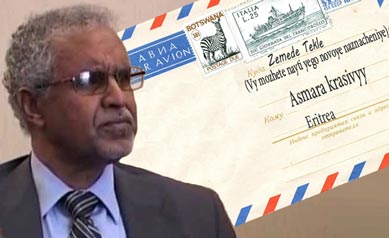 Like all countries ruled by totalitarian regimes, life in Eritrea revolves around the interest of the ruling party which monopolizes the national resources and equates the fate of the nation to its fate. Worse, the beleaguered Eritreans have no voice save for those in exile.

Sports, national Radio, television, theaters, drama and music production are all run like regiments by security officers. The slogan of the regime’s major website is, “Serving The Truth.” And some of its otherwise well educated supporters who are exposed to democracies, believe that fanatically. They are convinced the ruling party (PFDJ) is the only reference about truth an its embodiment. The world is generally aware the PFDJ is a repressive regime, but not aware to what extent. Nothing happens in Eritrea except when the PFDJ wills it.

The regime supporters believe Eritrea without the PFDJ will be a barren land. They even credit the ruling party for good rains, and by implication, for good harvests. They believe every positive result is attained because of the wise PFDJ’s leadership. If an entrepreneur constructs an office building–it is credited to the party. The traditional work ethics of Eritreans, their historical resilience, and their perseverance are all credited to the PFDJ. However, not the Eritrean trepidation and failures… and the embarrassment of the country’s citizens caused by the inept regime of Isaias Afwerki. These, they believe, are the making of the sellouts, the Ethiopian spies, the CIA lackeys–and that covers a big chunk of Eritreans. Can we actually call Eritrea and independent nation if that many of its citizens are lackeys, spies, and sellouts?

In recent years, Eritrea has made it to the headlines mainly on two categories of news: its overflowing number of refugees leaving the country and its defecting athletes. On the refugee embarrassment, the government always blames foreign powers “bent on seeing Eritrea drop to its knees”; that is also true in sports, though it likes to take credit for all Eritrean successes, cycling for instance: But it never mentions the defections of players who choose to abscond once they are out of Eritrea.

In the early years after the Ethiopia-Eritrean border war stopped, it was the journalists and media people who were leaving the country in droves. Eritrean athletes and journalists still live in a vicious cycle of the indefinite national service, and work for the government owned media, the only game in town, and wait for a chance to find themselves outside Eritrea to defect.

For many years Alamain Siraj, a veteran of the armed struggle, was in charge of the sports commission until he was replaced by Major General Ramadan Osman Awliyay. The commission runs its units like a military outfit: athletics, football, and cycling federations. They were managed by military personnel ranging in titles from Major General, to Brigadier General , to Colonels.

In April 2005, the late Solomon Aberra, the director of the state-owned Radio Zara, escaped from Paris where he was accompanying an Eritrean sports delegation and his defection received wide coverage. He told awate.com that the passports of the delegation members are held by a custodian among the minders who travel along and that is the only thing holding Eritreans from defection. He also mentioned that athletes were required to post a 100,000 Nakfa deposit to make sure they returned to Eritrea, which applied to all athletes, including those who return home to a “hero’s welcome.” Solomon had secured his passport on the pretext that he needed it for a press credentialing in France. He immediately sought asylum in Germany where he stayed until his sudden death in 2011.

In a dinner reception held in honor of the coaches and athletes in December 2006, Isaias Afwerki awarded them incentive money, “for the victories [they] registered in Zambia and Kenya.” That didn’t prevent defection and embarrassments in African countries.

Shortly before his death in October 3, 2009, Minister Saleh Mekki was relieved from his position (Minister of Health) and appointed Minister of Fisheries. In addition to his new ministerial responsibility, he was training his successor Ms. Amna Nurhussein, in the Ministry of Health, as well as overseeing the sports commission, of which Maj. General Ramadan Osman Awliyay was no longer the commissioner.

A few months ago, a government media mentioned the name of Zemede Tekle Woldetatios , the ex-PFDJ ambassador to Italy, with a new title of “Commissioner of sports.” That meant Zemede Weldetatios has occupied the former position of Maj. General Ramadan Awliyay who became the administrator of the Central Zone. At about the same time, Eritreans casually discovered that Pietros Fesshazion became the Eritrean ambassador to Italy. And if you are wondering why casually, that is how information reaches Eritreans, a casual mention of names and titles in the government media because the ruling party doesn’t announce appointments and transfers of “public servants” in a formal manner.

Zemede Weldetatios, who graduated in the eighties from a Soviet Union university, was introduced to the Eritrean public in a 1991 in a video recording of the Bologna festival. As some EPLF leaders entered the arena, Zemede introduced them in a very excited way: “Look! These are our heroes! These are…!” The excessive praise of the leaders was not well received, particularly by the egalitarian cultured veteran combatants who believed the role of the leaders was not different from the roles of the unknown combatant. At any rate, Zemede stole the limelight of the 1991 Bologna festival. To this day, veterans of the armed struggle era remember him as the man who embarrassingly praised the leaders.

In September, 2001, some of the leaders that Zemede excitedly ushered into the Bologna arena in 1991 as heroes were imprisoned by Isaias Afwerki, their colleague for many years. Zemede and others looked the other way and remained silent. Ironically, Ambassador Antonio Bandini, Italy’s, as well as EU’s, Ambassador to Eritrea, lodged an official protest with the Eritrean government following the arrest of the 11 former members of Eritrea’s ruling party (G15), the indefinite closure of the country’s independent press, and the arrest of independent journalists. On September 28, 2001, Ambassador Bandini was given a 72-hour deadline to leave Eritrea.

Two years later, in August 2003, Ambassador Andemichael Kahsay who was recalled from his ambassadorial position in Italy and was frozen, died mysteriously in Asmara, allegedly after falling down a flight of stairs.

In 2013, the unfortunate Zemede Tekle was put in an awkward position when he had to defend the Isaias Afwerki regime in connection with the Lampedusa Tragedy where close to 400 Eritreans drowned when the boat that was taking them to the Italian shores capsized.

There is no doubt Zemede knows his government’s repression has caused the refugees to flee their country, but like all loyal servants of the repressive regime, he couldn’t say it let alone take a position over the tragedy. But regardless, Isaias was not pleased with Zemede’s performance in handling the Lampedusa embarrassment as if Zemede had the ability to whitewash Isaias’ crimes against Eritreans.

Isaias Afwerki pulled Zemede back from Rome and appointed him the commissioner of Sports, but he is still unlucky; last week, ten Eritrean athletes have absconded in Botswana under his watch and he will be blamed for it though the reason for the absconding of the athletes is not an administrative failure but a bad government that is bent on pushing the population out so that it can lord over its rubble alone. The latest defection has proved that changing commissioners will not solve the problem and Zemede or anyone else cannot fare any better than Maj. General Ramadan. However, if Isaias remains true to his usual manners, he might look for another commissioner for a scapegoat. That is why all ambassadors and officials publicize their attempts to resolve such crisis to ward off any accountability that they didn’t do anything to ameliorate the situation. And that is why Ambassador Saleh Omer hastily left his residence in South Africa and rushed to Gaborone to lobby the Botswanian government to expel the athletes back to Eritrea. He failed.

Since last September, two major events happened in Eritrea: first, on September 14, Molla Asghedom, the leader of the TPDM, the Ethiopian opposition leader that is stationed in Eritrea, broke through the Eritrean border security lines with hundreds of his forces and escaped to Ethiopia through Sudan; and second, last week ten Eritrean athletes absconded in Botswana.

Isaias Afwerki, was not seen in public for a few months with the exception of a brief government-media report on his September 18 meeting of an Indian envoy. At long last, today he appeared on television. If he doesn’t go into hiding again, he might make cosmetic change within the sports commission in which the complacent Zemede might be one of his targets.

But to find a lasting solution for most of Eritrean problems, so that Eritreans can breath a sigh of relief, Isaias needs to remove his partners in crime, and then fire himself.