Grassroots view: The Discourse of Martyrdom and Sovereignty (P2)

Posted on July 22, 2016 by Chefena Hailemariam in Articles 56 Comments 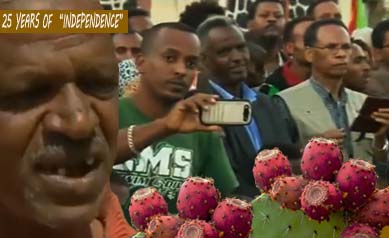 In Part I tried to show two separate narratives or discourses around martyrdom, sovereignty, and nationalism as represented by the dominant Party-State versus the grassroots or popular views. I also argued the Party-State’s intense propaganda that the population have been subjected to on its own, cannot explain why the majority of the communities, at least in the Highlands, have to continue to affirm their allegiance to the ‘martyrs’ legacy’. I concluded by pointing to the importance of looking into the common people’s understanding of the notions related to martyrdom and nationalism.

In their daily contact and conflict the villagers in Highland Eritrea would be engaged in a dispute over possession or use of land or any other dispute of ownership rights. As is the practice, one may invoke to the highest earthly authority to make a forceful appeal to the sense of fairness of a hearer. In ‘the name of the law’ or ‘in the name of the state’ would be the commonest language used in situation where the complainant is soliciting something desired ዝባን መንግስቲ፡ (in the name of the state) was then replaced with ዝባን ገድሊ (in the name of revolution/struggle) in the areas that fell under the jurisdiction of the struggle era organizations.

When exactly ዝባን ስዉኣት! ‘in the name of the martyr’ was introduced and how people adopted it may not be known, but certainly this was not introduced by decree.  It is most likely that the awareness that the heroes don’t die ordinary death but are martyred emerged and gained popularity in that era of armed struggle. And it occurred to the people those who to fall while fighting the enemy have to be acknowledged for the highest self-sacrifices they had to pay.

The utterance of the word (martyr) ስዉእ in ዝባን ስዉእ (in the name of the martyr) is communicated with such power and emotion to bringing about a desired outcome, in many cases actual response favourable to the complainant.  The response, beyond its communicative function is expected to produce action i.e., that of persuading or prohibiting.

Change in socio-political order are accompanied with new kind of social use of language. In post 1991 period we note that the elements of language used in pre-1991 being carried over to the post-1991 and being reproduced in the areas previously under occupation.

Let me now present to you tape-recorded episodes of litigation in real-life that served as evidences in my research. The first one was recorded from a scene in the village of Adi-Nfas and it concerns a dispute over a plot of land for the construction of a house. The litigants in the dispute were standing before a communal court judges and this is how the legal arguments went on:

The complainant, in making a reference to a relative position of the land in question and addressing the presiding judge said: ‘ናብ ገረብ ስዉኣት ገጹ’ (towards martyr’s plant/trees).  The defendant then interjects ስዉኣት ኣይተላዕሎም! ስዉኣት ኣይተላዕሎም! Literally translated don’t mention the martyrs name; but connotatively meaning “don’t take their name in vain” or “don’t desecrate their name”. (Hailemariam, 2007).  Over the years, there seems to have developed a cult of the martyrs, which is why the slightest disrespect to the martyrs is received with horror and zero tolerance.

In the neighbouring village Emba-Derho a legal dispute of similar context was audio-recorded.  Although the language is typically of legal and social nature and as formal as in the above example, there appeared a lady who spoke in a rather emotionally charged tone. Embittered by the injustice she experienced, the her statement, the lady complained to the judges, “I will go around Karneshim with a frame of my martyred daughter in my hand so people may show sympathy for me”. She said that while shedding her tears in anger and frustration.

Looking at the features of the above legal language of communication, in spite of the formality of the setting, the lady’s talk was of a mixed nature i.e. partly formal and partly spontaneous. On the other hand, if we take a close look at the aggrieved lady’s declaration that she is a mother of martyred daughter, has another cultural implication. The sense of pride she feels by associating herself with a martyr. And trust, which is based on shared values of the society is to be taken for granted. But, in no way can one say the lady was pretending. (my filed note).

Another feature of significance relates to irrationalities of the party-state’s top-down process of nation-building projects.  She prefered to call her wereda/ district customarily known as “Karneshim” instead of “ንኡስ ዞባ ሰረጀቓ” as in the Zoba/Sub-Zoba model which was introduced in 1996.

It is quite interesting to observe the difference between what the elite-led change in the traditional administrative divisions purported to achieve and the actual practice ten years after its introduction (at the time of this study). The claimed rationale for arbitrary redrawing of the regional boundaries was to abolish narrow regional and sectarian sentiments. As can be discerned from the above, the lady’s choice of the original name of her district suggests preference to her traditional local identity over changed (imposed) local identity.

The implication of the above isolated but nontrivial event is telling. No matter how limited in scope, the implication of these ‘snapshots’ have much more significant meaning at broader societal level.  This is well supported by the study conducted in the same village by a non-Eritrean scholar.

David O’Kane describes how the Village of Emba Derho, responded to the Party-state efforts at promoting a new national identity at a crucial point in Eritrea’s recent history (O’kane, 2012). He found out how the village of Emba Derho had resisted an elite led nation-building project that got it into a confrontation with the state.  The village wanted to retain its independent rights to its own land.  Traditionally, land in the Highlands is considered not only as an economic asset but also a cultural and identity making resources. The state’s tampering with traditional land tenure system was tantamount to an assault on the very socio-cultural identity of the village. The author observed, residents’ assertion to retain their land right, in accordance with the traditional land ownership system, is closely linked with their own local, subnational identities. However, the village’s allegiance to the nation was demonstrated by the respects it accords to its martyrs. He referrers to this as “selective response to the state’s nation-building projects”. I find the following quotation highly relevant in as much as it captures the connection between popular view of martyrdom and nationalism in a nutshell.

“Hade hezbi, hade lebi, ‘one people, one heart’: I had seen this slogan prominently displayed at the Festival Eritrea, and I saw it again etched into the concrete floor of a house in the village of Emba-Derho. In Eritrea in 2000, outside those arenas specifically controlled by the government, it was rare to see such voluntary, popular use of the slogans and iconography of the nation-state. Only once in Emba-Derho did I see a household where the photograph of President Issaias Afeworki was prominently displayed. What is commonly and prominently displayed in the vast majority of households in Emba-Derho are the martyrs’ certificates, reminders of those who lost their lives in the liberation struggle” (O’ Kane, 318: 2012)

1.1 Should there be a specific day for martyrs Remembrance Day? And how was the date 20th of June selected?  What are the implication of erecting a statue for Pushkin while Asmara bears no icon of the heroes of the armed struggle? Unsung heroes were mention, such as Kebire who is considered to be the first martyr, or Alem Mesfin the first female martyr; to date they have not received the respect they deserve.

1.2. The selected day is the same day in which Isaias Afwerki announced that there will not be a ‘multiplicity of organizations’. Was this ominous of what was to come?  But, the need for the selection of one particular day that symbolically binds the Eritrean society was not be debated.

1.3. And finally, the most recurrent question is whether the legacy of the martyrs has been betrayed.

The festive season (25th year celebration). Self-sacrifices has been at the centre of Eritrean nationalism for which the martyrs were celebrated. Now, between the Eritrean villages mentioned in the examples above and the world lies the party-state’s structures of control and ideological apparatus.  In that week long festivity, the ‘diaspora nationalists’ were not only celebrating but also celebrated in recognition of their sacrifices to ‘protect the sovereignty of the land’. On May 24, 2016 they stood out and shined by their outfits and glowing faces which reflected the nutritional benefits of living in the West. At Meda Bahti Meskerem, waving the flags of their countries of adoption and that of Eritrea, they paraded victoriously.  In a stark contrast, a gloomy looking man can be heard boldly saying in reply to the BBC reporter’s question, “No life……  I am no life …. [because] ‘too much hungry”.

That was one depiction of the many paradoxes that the Eritrean transnational political field presents.  I don’t see any point in indulging in the details other than referring it to readers to figure out what they would make of the two realities that the journalist’s reported.

The willingness to shed one’s blood for the realization of the imagined homeland has been the foundation of Eritrean patriotism. Many non-Eritrean writers agree that the Eritrean story of armed struggle is unparalleled by African standards for its unique resilience. The level of tenacity that the Eritrean society had shown was beyond what one can imagine, and the human suffering so enormous that no society would be willing to bear. The Party-State appropriated all nation-building projects including national symbols to serve its own narrow partisan interests. On the other hand, to unfairly treat national symbols on the grounds that the Party-State has a monopoly of, hence, justice seekers should distance themselves from, will sounds a little unreasonable.

On the other hand, a growing frustration among the populace at the appalling outcome of the heavy sacrifices that Eritreans has to pay is understandable.   This is the particularly the case if we engage in outcome rather than process oriented analysis of martyrdom.

In the forgoing we have seen how the three stands i.e. martyrdom, sovereignty and nationalism that tie up the individual to the nation have been manipulated by the state.  By their very nature they can be easily available for both political elite or counter-elites to rally people behind. So, in this two-part article, it is the grassroots’ view that have been argued for or foregrounded. And I wish to suggest that these views and the values placed on the above mentioned three strands to be upheld and cherished. Also, all those who have a stake in the future of the country need to be involved in matters of nation-building, including the utilization of all social, cultural, political, and symbolic resources in as much as they are meaningful to the society at large.

Hailemariam, C. 2007.Discourse and Social Change: language in the traditional /communal courts in Eritrea.  Proceedings of the First National Workshop of the Eritrea Chapter. Organization for Social Science Research in Eastern and Southern Africa – OSSREA. Pp 31-42.

O’Kan, David. 2012. Limits to State-Led Nation-Building? An Eritrean Village Responds Selectively to the Plans of the Eritrean Government. Studies in Ethnicity and Nationalism: Vol. 12, No. 2. Pp 309-325