Posted on January 17, 2015 by awatestaff in Articles 19 Comments 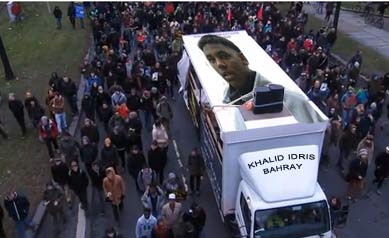 On Saturday January 17, 2015, thousands of Germans and immigrants marched in an anti racism demonstration that was carried out in memory of Khalid in Dresden (Watch the two Videos below).

Khalid fled his home town Keren, Eritrea, with his mother when he was five years old and settled in a refugee camp in Sudan where he grew up. Last year he made the journey to Libya through the desert and reached Italy by sea finally arriving in Germany in August of 2014, only five months ago.

The victim was stabbed to death close to the building where he lived with other refugees. His body was found the next morning.

The anti-immigrant rallies are organize by Pagida, a fascist organization.

According to The Guardian, sympathizers of the anti-immigration movement Pegida, spouted disdain for the dead Eritrean. One of them, Eric van de Hahns wrote on Facebook, “In Africa dozens of children and adults die every day and nobody’s interested in them. But as soon as a single asylum seeker pops his clogs, then the outcry is huge.”

The situation in Europe has after the Charlie Hebdo massacre where extremist Muslims killed 12 people in Paris, France.

Pagida is terrorizing immigrants and refugees by spray painting hate messages and Swastikas on street walls and immigrant residences, threats like, “we will get you all.”

It is unlikely that Khalid was stabbed for being a Muslim as much as he was for being an immigrant. Eritrean Muslims and Christians cannot be identified by their physical features since they look alike. However, the fanning the anti Muslim sentiments by some is basically encouraging the xenophobic wave that is terrorizing immigrants of all faiths.

Meanwhile, thousands of Germans and immigrants attended in an anti racists demonstration in Dresden.