Home / Articles / Ethiopia And Turkey Looking To The Future 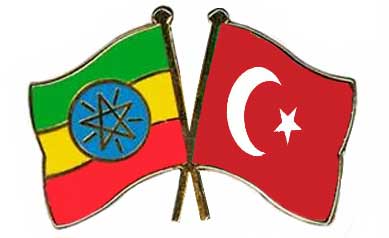 Ethiopia And Turkey Looking To The Future

This was the first time for me to see him person and shake hands; it was quite an inspirational encounter.

In what seemed like a family, as well as an official, visit, President Erdoğan arrived in Ethiopia accompanied by his wife and daughter. I was flattered when the coordinator of the welcoming ceremony introduced me to Erdoğan, jokingly saying that I was a media minister, before he seriously introduced me as a journalist from The Anadolu Agency. On Thursday, the second day of the visit to Ethiopia, I got another chance for a close encounter with Erdoğan.

His speech in the several occasions confirm that the Turkish president has a special place in his heart for Africa, in particular for Ethiopia. He emphasized Turkey’s “special ties with Africa, in particular Ethiopia, since the ancient times” adding that the relation is not based on narrow interest but genuine relations with Ethiopia that we “call Al-Habesha” which “is the first country to accept Islam.”

Erdoğan described the support that Turkey gives to Ethiopia as strategic “technological assistance so that [Ethiopia] will manage to benefit from its natural resources.” He further said, “We think that what we contribute to Ethiopia is very little compared to our love for the country.”

Erdogan visit will certainly help to enhance existing ties between Ethiopia and Turkey as well as Africa in general.

Describing Ethiopia as Turkey’s gateway to Africa and a very important historic country, the visiting Turkish president said that it dates back “to the Ottoman era and it is not a newly established relation.”

The self-confidence of the Turkish President is so obvious due to the fact that his nation is rising to the global power circle wielding historical, economic and political power, and it shows in the way he speaks his mind in a confident and candid spirit foretelling where Turkey could stand in the future.

Turkey, one of the major investors in Ethiopia, is an important development partner for Ethiopia which itself is advancing with the confidence and changing the nation. The delight that Ethiopian Prime Minister Hailemariam exhibited in receiving his Turkish guest attests to that. And PM Hailemariam is capable of making such relations fruitful, he has excellent leadership qualities he of his own and I a chance to witness it first hand at several occasions. For instance, when he was the chair of the African Union in 2013, where all African leaders admired his qualities.

I also attended the Afro-Arab meeting that was held in Kuwait in November, 2013, and which Prime Minister Hailemariam chaired, and where he expressed his vision for the special Afro-Arab relations, and identified the challenges ahead. He is a charismatic leader endowed with self-confidence and patience.

President Erdogan’s meeting with the Ethiopian leader focused in particular on Turkey’s relations with Ethiopia in particular and Africa in general. On Thursday, the Turkish president delivered a speech at Addis Ababa University (AAU), Ethiopia’s oldest higher learning institute, and addressed international issues. After the event, AAU awarded him an honorary doctorate degree.

Speaking about terrorism, Erdogan said that terror has no religion and is a form of murder against which all countries should take a united stand. Referring to the Jan. 7 attack on Charlie Hebdo in France, he said, “There has been a surge in anti-Islam sentiments not only in Europe, but all over the world following the recent terrorist attack against a magazine in Paris.” He added, “Turkey strongly condemned the attack and will continue to do so… as a country that fought terrorism for 40 years, we are totally against this violence no matter who commits it, where or under what pretense.” He also described the acts of terrorism committed by ISIS in Syria as “murder,” stressing that it is essential to adopt a united approach and fight jointly against all terrorist groups.

Erdoğan objected to attacking religious beliefs for terrorism, and condemned the term “Islamic terrorism” explaining, “We object to this term… Nobody can utter the words Islam and terror together, as Islam, both in name and in essence, means peace.”

To elaborate his message, he added, “There was an act of terror in Somalia today… If they say it was committed in the name of Islam, there is no such thing in Islam. A true Muslim would not commit suicide. Who are the killed people? They are Muslims too.”

President Erdogan said that he wishes to elevate the Turkish Ethiopian relation from inter-government relations only, to the people to people level. During Erdoğan’s term, the destination of Turkish Airlines has increased to 42 African countries. Also, the Afro-Turkish meeting was also held in Malabo, Equatorial Guinea with the support of President Erdogan.

Ethiopia has a big role in Africa and Turkey stands 17th in the world economy and has a rich experience in water technology and power generation, among others. The visit of the Turkish president to current Addis Ababa is expected to further boost the ties between the two countries.

President Erdogan is scheduled to visit Djibouti and Somalia on Saturday and Sunday respectively.

Previous In Civilized Germany The Perpetrators Will Be Tried
Next Afro-Pessimism, Optimism, Realism And Eritrea