Home / All / Eritrea: The Constitution 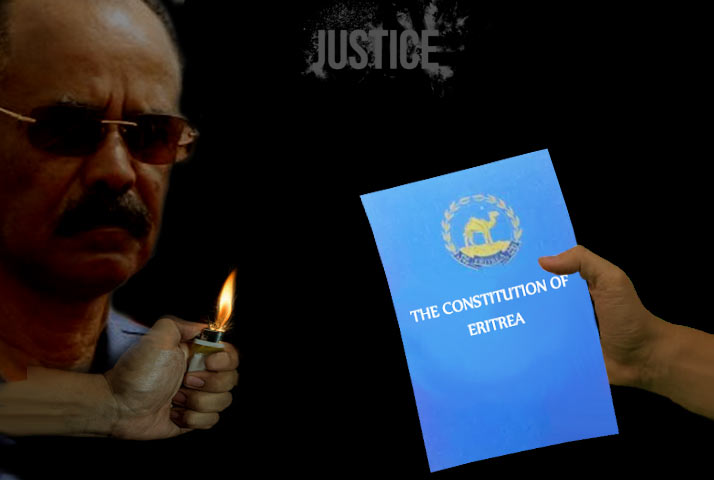 Here is a follow-up on “gual mengedi” – the constitution. I will stick to word limit and make it short. Maybe I should just have posted it as comment. Anyway, for some reason people seem interested in revisiting the subject. I tried to read as much of the discussion on the subject as possible. Things were a little too fast to follow but too emotional to ignore. Here I will aim for a snapshot of what I think the 1997 constitution says.

Before I start I would like to apologize to Dr. Berekhet HS who wrote a long and beautiful piece as a review to Dawit’s book. The article was written and submitted a few days before the review and I had no idea that would be an unfortunate coincidence. When I saw the doctor’s name I must tell you “ab tsifrey ki’atu delye”. This should also not be taken personal to the good man whose name we implicitly keep dragging into the dirt.

I will not say much on the key part of the argument that I share with the amazing Hayat and others that the constitution is the preamble and in our case, it establishes a spooky nation ruled by the dead who run the living through proxies called “tegadelti”. What I would like to add to this line is the key concern that many of the ELF guys had about the legitimacy of the constitution, based on the claim of restrictive participation that Ismael and Emma hammered enough. Even under best case scenarios where participation would be based of fair representation of the organized opposition, the only [or may be the most important] thing that such an opposition would have changed would have been the wording of the preamble. What would have changed here, I think is our understanding what we mean by martyrs and who the presumed proxies would have turned out to be.

That is not our subject today. Let us get into the articles section and this is specially to drag my friend SAAY into the subject a little deeper. I know people had long discussed these things to boredom but I think every cycle of discussion is different since we are discussing the subject with a different framework in mind. There are fresh players in the game now that we know we can’t ignore.

Just to explain why there is no ethnic politics on this one: The 1997 does not recognize ethnicity the way you think it is, i.e. a stamp of identity and a mold of politics. The only factor upon which the definition of Eritrean ethnicity is premised, i.e. ethnic language, is approached as a national symbol along with the flag and the national anthem. Where you see the mention of ethnic languages elsewhere, it is mentioned more as archeological revival and an effort to keep the symbols alive.

Of course, someone will argue that is not the case. In all fairness, the 1997 constitution does not approach national unity as a milestone or goal that will be achieved by a specific date. It treats it as a process that will be achieved gradually by “encouraging democratic dialogue and national consensus … and by laying … foundation of … harmony.” If you think a little more and suck on the joint a little harder you will discover that this – national unity as a process of harmonization – is the whammy itself. Allow me to borrow a concept that I read in a comment by “GitSAtSE”, my favorite guy of all times and I think the most brilliant amongst us. Looking back at how the EPLF approached innovation during the armed struggle, he argues that it was ‘group innovation’ (ganging up) that was taboo as opposed to individual initiatives of heroism in the battlefield, music, medicine or technology which were highly revered.

This very experience is reflected in the way the 1997 constitution conceptualizes ‘democracy’ and distinguishes it from ‘development’. The democracy that the constitution intends to establish is very different from the liberal democracy whose backbone is individual liberty that you have in mind. Remember, the constitution commission that many tend to drum and “waTa” today was composed of two groups. You are thinking ‘Christians and Muslims’. The answer is no. It was composed of crusaders of the Orthodox church and Wahabies of the Saudi school.

What these two groups have in common is the Hobbesian conviction that in the absence of an iron fist, Eritrean Christians and Muslims will end up ravaging one another and life in the country that we paid so much to achieve will be “nasty, brutish and short”. Maybe they are right. I don’t know. What do you think? The bottom line is: unless explicitly stated, this assumption ends up contaminating every aspect of good will in the text. The impact in our case can be seen in the fact that what the 1997 constitution views are ‘democracy’ is a framework that regulates competition between two and only two legal entities called Christians and Muslims. The constitution, through excessive emphasis on ‘national unity’ defines and institutionalizes the relative political jurisdictions of those legal entities. An Eritrean is not an individual – he/she is either a Christian or a Muslim and only Christians and Muslims are Eritrean citizens.

The unassociated liberal individual – the civic citizen – is nowhere on the map. Any mention of individual liberty within this context is either outright hypocrisy or pure naivete. The very spirit of liberal democracy is to disintegrate the ganging of preferences along primordial lines in favor of new grouping of preferences around ideas and values. This in turn makes the pursuit of national unity premised on a religiously qualified caste system the number one enemy of democratic ideals.

Let us play with the flashy stuff that the proponents present as proof of intent in the constitution.

Draw a four-quadrant cross on your table – say ‘besme’amm’ – and spread articles 14 to 29 on the table. Give the quadrants names for ease of reference: (a) ‘absolute’ is for the quadrant that will contain ‘fundamental rights if and only if everything else turns out as designed – here you have life-liberty, and freedoms’ [articles 15, 16, 18, 22] that are supposed to be non-negotiable and you will have them no matter what dignity, privacy and family. (b) ‘relative’ is the one that contains things you may have [articles 19, 20, 21, 23] if circumstances allow and include freedoms, voting, economic opportunities and the right to property. (c) ‘guarantees’ are the things [articles 14, 17, 24, 28] that will hopefully ensure that the things in Quad-A, given the circumstances in Quad-B are allowed. (d) ‘conditions’ are the things [articles 25, 26, 27, 29] that may allow the suspension of the whole thing if not satisfied.

The most obvious of these conditions is ‘emergencies’. Would you demand rights when Eritrea is under an emergency? Shame on you! Would you expect any emergencies in a country that is explicitly founded on the fear of a Hobbesian disintegration of warring sects and situated in a region that is taking Eritrea as a role model to teach them the ABCs of harmony? I think the rule rather than the exception would be perpetual emergency.

I hope you still have your holly cross in front of you. Now do the same with the articles of the executive. The president has absolute protection in the form of privileges while he/she is current and more privileges as an ex-president [arts 43 and 44]. He will work as expected depending on the extent to which he/she can exercise his powers and have control over his cabinet [arts 42 and 46]. As far as we are concerned, rest assured because he will act as president and will be qualified for the job [arts 39 and 40]. We need to trust the system because the president will serve a specified term (hopefully), swear the oath (on “sema’etat”) and promise to be accountable (to the Lord) [arts 41, 45, 47].

I probably need to explain the reason I said the so called national objectives in the constitution are designed to serve the mother of all objectives: national unity. I will mention one such example to elaborate:

Not only is ‘unity and harmony’ the dream of Eritreans, but the 1997 constitution presumes that we are not alone. The plague of disunity, it claims, is even worse on others in our region and launches an activist foreign policy where it will be the job of the Eritrean government to spread peace and harmony across borders.

It is clear from the context that in ascribing this paternal role to Eritrea, it essentially lifts the restriction of non-interference in the affairs of others for the Eritrean government to tell others how to handle their affairs. Of course, you know who they had in mind: Weyane who in the backs of their minds would eventually end up with “zeragito” in Ethiopia; “Gelfafat” in Sudan who had it all wrong and the savages of Somalia who keep filing their teeth.

Maybe I should not exaggerate. The constitution after all was born in the peak of “African renaissance” where the president had one “medb-Eyo” for every nation on earth. The point I am trying to make is that according to the 1997 constitution, Eritreans rejoice in the welfare of others. There is no mention of Eritrean national interest factored into the foreign policy recommendation other than the scary scenario that we would end up paying more martyrs for the welfare of other nations.

Do you still blame the president for dumping the kindergarten constitution?