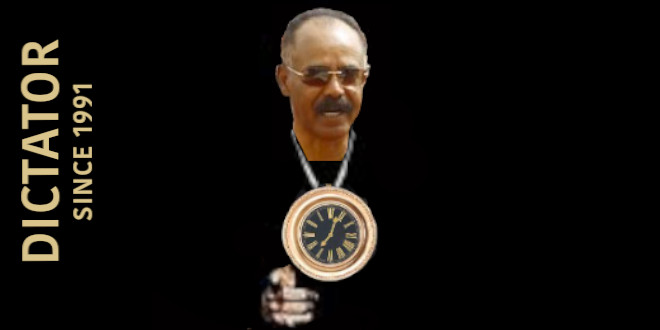 Eritrean President Isaias Afewerki holds the distinction of being one of the longest-serving rulers in Africa. This record alone puts him in league with such well-known African strongmen as Omar al-Bashir and Idriss Déby. Yet, his capricious nature betrays the inspiration he draws from the likes of Mummar Gaddafi and Teodoro Obiang Nguema Mbasogo infamous for their even longer authoritarian rule. Hence, obviously unsatisfied by the level of notoriety he has already achieved, he seems to be looking to emulate the feat of dictatorial longevity the two achieved.

President Isaias’s absolute control of, and dominance over, a country he has ruled with an iron fist for nearly three decades have earned him a place of infamy in the annals of African political history. Seizing, as he did, such immense power — and exercising that power with utter ruthlessness for a whole generation — would be logically expected to satiate even the most callous of ambitions. But, evidently, not so in Isaias’s case. Eritrean politicians and former associates with insights into his thinking have long argued that the man has an ingrained, secretly-held ambition for political power and influence whose scope extends beyond Eritrea to include Ethiopia and perhaps even the Horn of Africa region.

Subtle hints of such aspirations did, indeed, bubble from time to time in the president’s utterances of the early post-independence years. But, it is his conduct since the 2018 Eritrea-Ethiopia rapprochement that made his ambitious intentions find a more overt and frequent expression. The nine-month period following the peace accord saw the two leaders exchange frequent state visits and hold repeated summit meetings amid a fanfare of publicity. Isaias’s speeches and decisions of that period were geared to advancing his regional agenda in a way that threatened to undo Eritrea’s sovereignty and violate its territorial integrity. Not surprisingly, therefore, the president’s observed political maneuvers and the unholy alliance that incited them have since stoked doubt, consternation and even anger among Eritreans.

A Legacy of Eritrea’s Liberation Struggle

The dictatorship that President Isaias has imposed on Eritrea is rooted in his sardonic betrayal of the very society that had bestowed on him so much honor and reverence. Like it or not, the man has had arguably the most profound impact on modern Eritrean history. His status as the nation’s first and, so far, only leader is just a sequel to the dominant role he played during most of the long liberation struggle including as its uncontested leader during its final years.

Young Isaias Afewerki was one of the few driven revolutionaries who gained recognition quickly after joining the armed struggle and steadily grew in stature over the first few years of service. And when he rose through the ranks to leadership positions, Isaias’s fame soared among the population. Nevertheless, in contrast to his reputation as rebel leader, his personal qualities remained largely unknown to the public due to the nature of his rebel organization (EPLF) and the realities under which the struggle was waged.

It was not until after Eritrea’s independence that a window into the president’s personal side was afforded by his public engagements and governance direction. His public image began to take shape thereafter fed by individual perceptions and by rumors that often swirled around his personality, physical health and mental state. But, there also exist credible reports on those issues by sources who either possessed the wherewithal (or were well-placed/connected enough) to be in the know. Their accounts, therefore, provide a valuable clue to the mindset that drove the president’s recent, potentially dangerous actions and statements.

For instance, in secret diplomatic cables he sent to the State Department in 2008/9, then US ambassador to Eritrea, Ronald McMullen ends one of his brief appraisals of the political, economic and social conditions in Eritrea with the statement “ … and the country’s unhinged dictator remains cruel and defiant.”[1] The diplomat also relates views about Isaias’s mental state that a foreign official and a leading Eritrean businessman confided in him. The earlier cables additionally characterize Isaias as hot tempered, unpredictable, paranoid with erratic behavior and mercurial temperament.[2] Some of these characterizations were later echoed by Andeberhan Woldegiorgis, a former senior official who worked intimately with Isaias for decades in both the EPLF and the PFDJ-regime it morphed into following the country’s independence.[3]

Eritrea’s present reality is defined by an economy that is moribund, a society that is unraveling and a political space that has shrunk to the point of exclusively accommodating a tyrant. The regime which engineered this reality lacks a constitutional basis, is devoid of people’s representation and does not even possess a functioning Cabinet. It has systematically stripped public institutions of their legitimate authority and reduced them to mere instruments of oppression. In its functions, the regime scorns the rule of law and shuns transparency and accountability.

In light of these stark truths, therefore, it is important to clarify the intended sense of the words in the Section Heading above. First, the heading should be understood to mean not a ‘national policy’ direction, but one that is singly dictated by a strongman in pursuit of his personal wishes and interests. Second, the term ‘policy’ is used here not in the ordinary sense of the word, but rather loosely to refer to the strongman’s dictatorial agenda.

The regime which dragged Eritrea into its present sorry state has itself undergone a steady degradation which, over time, led it to devolve into successively more villainous and less inclusive forms of government. What started off as an incipiently-democratic provisional government in 1993 degenerated in stages first to an authoritarian regime; then to a rule by a sole party that supplanted national government and usurped its powers; and finally, to a “team” goaded by the president and comprising a handful of aides and party officials, a few military commanders and the chiefs of the National Intelligence and Security apparatus that casts a long shadow over life in the country.

Despite these structural changes, however, the system has remained remarkably faithful to its blueprint for governance which essentially includes: (a) employing police-state measures/tactics to intimidate, muzzle and control the population, (b) compelling the flight of national investment capital and capacity — hence, deterring foreign investment — to impoverish the country and (c) subjecting citizens to forced labor, thereby subjugating and dehumanizing the population. This policy has fueled an exodus of the youth and of the professional class out of the country while keeping the rest of the population cowered in fear of the regime.

Eritrea’s wretched political and socioeconomic conditions of the last two decades — and their documentation by the international community — provide incontrovertible evidence that the aforementioned social tragedies have been happening on a grand scale and are, in fact, the intended goals of the regime’s governance policy. Pursuing a policy marked by such levels of cruelty and mindless thuggery seems to be aimed at more than just perpetuating the regime’s grip on power. The president’s history of intrigue and conspiracy and his lust for limitless power suggest that the policy is designed to reduce the country to an impoverished, beat-up and subdued society incapable of standing in the way of his adventurous quest for regional power and dominance.

A corollary to the Eritrea-Ethiopia peace accord is an “alliance” that the leaders of the two countries forged under a “cooperation agreement” the details of which remain unknown even to their respective governments. The period that followed these deals witnessed President Isaias’s newfound zeal for diplomacy and a revival of his long-dormant ambition for power and domination over the Horn of Africa region.

No sooner had peace been restored than the president sprang out of isolation and partnered with the Ethiopian leader to launch a regional diplomatic campaign. Its declared objective was promotion of their “shared vision” of regional “integration and unity”; but subsequent developments revealed that it was, in fact, a bid to realize their respective ambitions for power and influence in the region. The campaign initially generated a flurry of frantic diplomatic activities; but it was not long before the scheme fizzled out with no tangible results. So, having hit a wall with his regional agenda, the president seems to have subsequently decided to scale back on his ambition and, for now, focus his efforts on just Ethiopia.

In his latest interview with Eritrean state media, the president strangely, but unambiguously declared his intent to interfere in Ethiopia’s internal affairs with the aim of influencing the course of its shakey political process.[4] Logic suggests that he is banking on his ill-defined and secretive “alliance” with PM Abiy Ahmed and the latter’s acquiescence to provide the vehicle and justification his interference will require. As for the Ethiopian people, Isaias has already been pandering to their emotions intent on blunting their sensitivity to his planned meddling. His Ethiopia-related statements and actions of the past two years, for example, have worked up ultranationalist elites into reviving their deep-rooted territorial sentiments and ambitions.

His singular goal now seems to be coaxing a widening segment of Ethiopian society into placing their trust in a repentant “identity defector” who — having previously fought a 30-year liberation war against the country — now seeks acceptance as a “true son” of Ethiopia and claims to have her national interests close to his heart! President Isaias has been striving to achieve this goal by peddling falsehoods and deceptions crafted out of distorting facts, denying truths, negating reality and revising history. The following events demonstrate his stratagem of deceit:

With those shockingly perfidious remarks, Isaias Afewerki betrayed the trust of the Eritrean people and their national aspirations; he desecrated the legacy of the heroes and heroines of the liberation struggle (by insinuating there was ‘no reason’ for their martyrdom); and he demeaned himself by nullifying his lifetime achievements and denying his past. This sinister, reprehensible behavior is a signpost pointing toward his imminent downfall and the shameful end to his regime.

A sober consideration of prevailing realities in Eritrea (and the region) reveals that the clock is ticking on President Isaias and his regime. Put bluntly, the president is really running out of time to do much of anything. Nevertheless, his recent history suggests that — short of experiencing mental or physical incapacitation — he will never abandon his quest for regional power. If so, the intrigue, conspiracy and intervention that commonly underpin his politico-military adventures can have ruinous consequences for Eritrea and for the region as a whole. Therefore, the Eritrean opposition movement should be mindful that this is a time not for a let-up, but rather for an intensification in the struggle to send the enervated regime to its grave!

Beguiled by the diplomatic/political drama that the two leaders acted out periodically, some in the region had given support to the Isaias-Abiy “alliance”. Much of it has been narrowly based, opportunistic support from special interest groups inspired by wishful anticipation that the alliance’s political charade will yield outcomes that serve their own selfish interests. However, the only outcomes the region witnessed in the last two years are political instability, economic downturn, civil strife and large-scale population displacements draped in the political/diplomatic gamesmanship of leaders. This stark reality will, hopefully, remind ultranationalist zealots that events are being guided and history is being shaped — as they will in the future — by factors other than the selfish wishes and dreams of the few.