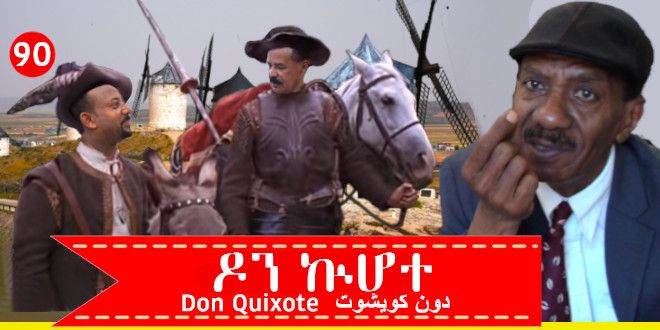 Are you a good person? Do you spread peace or hatred? Do you promote coexistence or infighting, harmony or discord, love or hate, stability or insecurity…? These are questions we have to ask ourselves every now and then.

What we own with certainty is the present moment, we strive to make our future better, but we cannot change the past. The Now is what we have. However, we are a product of our memories, the experiences that shape and define us. Selective and crooked memories make us a clone of the PFDJ hacks—arrogant and cruel lots who cannot live under the shade of the rule of law, justice, and stability. It makes us a nation of arrogant citizens under a perpetually failing government.

The PFDJ is a manipulator and it has found a ripe field in ignorant and docile attitude of some of our people who lack the ability to think critically. It has taken the people for granted and it forgets the Eritrean struggle was a voluntary

undertaking. Therefore, the PFDJ cannot keep blackmailing Eritreans forever—we struggled (as if they did that singlehandedly) we brought the country (as if the country was a goat they leashed and brought to the barn).

Yet, they do not understand the meaning of liberty—they never liberated the people but enslaved them instead. As rulers, they have failed miserably, and here is an example represented by the disrespectful speech by the PFDJ consul Washington, DC.

The PFDJ is predisposed to silence the people by making them feel less worthy than those in power.

Lee Iacocca was a famous executive in the motorcar industry—he was with ford and then chairman of Chrysler. Once they had a top position to fill in the company and several candidates were presented to him, one of them with a high recommendation from the managers. When he asked why they recommend him, they said the candidate was a hard working man, never took a vacation and spent most of his time working. Iacocca surprised them: “Fire him”. His justification, if a man is unable to squeeze a few days’ vacation in a year, he is not a good planner.

I believe the PFDJ should be fired because it is a lousy government living in the glory of the struggle era. Worse, most of its officials have developed an acute sense of entitlement.

If you cannot plan good enough to improve the lives of yourselves, to the extent that you claim you are not living a good life, what could you do for the common people? You are not good and should handover the administration of the country to others who could. Anyone will certainly be better than the PFDJ, and the Eritrean womb is not barren. But they think they are the best that Eritrea could produce and that is the source of their arrogance. Otherwise, how could a country be worse off under a supposedly national government compared to its past? How could a national government be as cruel as the regimes that the Eritrean struggle overthrew? And worse, expose the country to leeches, riffraff who have been so emboldened to the extent they want to reverse our toil and sacrifices of many years.

Thanks to the PFDJ, we have the nostalgic Andenet, who enjoyed being lap dogs of Haile Selassie, the Agazian black fascists who are contemplating genocide, and Tigray-Tigrigni supremacists who dream of lording over Eritreans.

The regime failed to fight the forces of disunity

To explain this section, I will share with you a novel; “Don Quixote de la Mancha”, generally referred to as Don Quixote, is a classic novel written by the great Spanish writer Don Miguel de Cervantes, (Don is a honorific title, like Ato or AlSayid around Italy, Spain and Portugal—that is why all Mafia bosses were known as Don, if you have noticed in movies). Don Quixote (Dan Key HOE-Tay in the original Spanish pronouncement) but some pronounce it keshot, keshote, quishot, etc, in different languages. You can find the full movie on the Book on YouTube. I recommend it for old Italian movie lovers, starring Francho Franchi and Cicco Ingrassia: “Don Chisciotte e Sancio Panza Film complete”

The novel was originally written in Spanish about 430 years ago and it has influenced Western civilization to the extent that “Quixotic” entered the English vocabulary meaning impractical, unrealistic, or chasing something that isn’t there. Still, he believed the windmills were giants turned into windmills by magicians. In brief, the novel, Don Quixote, is a cartoonish personification of chivalry, feresegna or Faris, of hero, a knight.

The main character Alonso Quixano was a man who was influenced by stories about chivalry and heroism. He became delusional and thought he was a knight, a feresegna, a faris. He believed it was his duty to fight the windmills that are actually giants that look like windmills. He was determined to destroy gthem to save the people. Don Quixote prepared his gear, including a lance and a horse, hired a farmer named Sancho Panza as a servant/follower to helps him around, like a Mahio. Then the two embark on a journey. First, Don Quixote must find a prince or a duke to knight him before they go to fight the giants.

Quixote saw the windmills, they were giant fighters scattered all around the country. He fought them  while the people laughed and mocked him. However, he was knocked off his horse by the turning wings of a windmill– Sancho told him they were just windmills, but Quixote wouldn’t take any of that. He was sure they were giants that the magicians changed into windmills.

That story if also the source of the English saying, “chasing a windmill”—it’s said to people who dream of doing the undoable, like the Andenet and Tigray-Tigrinya lots, the disruptive insane people are “Chasing the windmill,” “enda TaHanit!”

Many people have been telling them to stop the madness, just like Sancho told Quixote, but the delusional Quixotic Andenet riffraff wouldn’t listen. And that is a serious affront. It’s ignorant of them to conveniently forget the experience of real Eritreans who persistently pursue liberation, not a quixotic goal, not mirage.

In a speech he delivered in 1775, Patrick Henry uttered the immortal words: “Give me liberty or give me death!” And that is the principle that all free people must live by. Unfortunately, at times of our temporary weakness is perceived by the fools as a final capitulation. They do not know Eritreans also claim the spirit of Patrick Henry’s quote: Give me liberty or give me death. Even Eritreans who never heard of Patrick Henry believe in that. It’s etched in our psyche, in our being, though hidden by the complicated smoke of confusion spread by the PFDJ.

In Conclusion, bad memories of the past embarrass normal people, but the ignorant are proud of their bad history. A nation that loses its tangible memories becomes a nation of walking mannequins trying to imitate rational people who are not bonded foolishness but rational behavior. The racists, fascists and supremacist remember only the hateful and bigoted history to which they strive to relive. And that is a journey back in time, to savagery, to wildlife akin to that of animals. The guilty conscious always try to fill the deficiencies in their manufactured or wrongly perceived memories by seeking reassurance from mythologies, folklores—irrational, abstract claims that cannot be proved. In short, they are irrational people with bad temperament, combative, and arrogant.

On the contrary, good patriotic people look to the future and dream of a day their nation would grow wings and fly, to be free, to search for a better future. A people centered future of stability and prosperity. A future where human life is sanctified, where citizens take their rights for granted, where they do not have to leave their natural habitat involuntarily, where they do not fear their government but respect it. And there is no doubt they will achieve that noble goal, they will roam the streets of their birthplaces with heads high up. They will live a life of happiness, smiles, and laughter, and joy, after the rooster crows, and when the soft amber sun of the morning peeks from the horizon. It will be down soon, never doubt that.