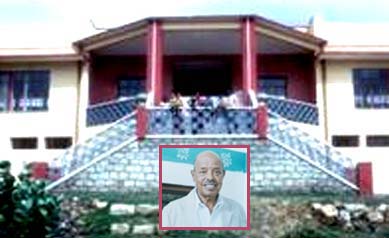 This is the third portion from the series of articles from the 1968 publication of Outlook Magazine that was published by the Keren Secondary School. The first of the series was an article by the late Melake Tecle, and the 2nd, was by Minister Ahmed Haj Ali.

The word seminary has come from the Latin word “seminarium” which means a nursery of a flower bed. Thus, a seminary is a solitary place where young men are educated and trained in a perfect disciplinary way for the purpose of becoming priests.

The Catholic Seminary of Keren was established in 1872 by a Catholic Society known as Lazarists. It was run by this society up to 1894. In 1894, the Lazarists were replaced by another religious order of Franciscan Capuchins and since then the school has been run by them under the Catholic bishop of Eritrea. For many years, the seminary had been the most popular educational and cultural center. While education was at its infant stage in Eritrea, many people could receive higher studies in the seminary. By 1972 it is going to celebrate its hundred years anniversary, and from this everyone can understand how old the school is. The staff is composed of Diocesan priests under the rectorship of one Franciscan Capuchin father. The present rector is Dr. Abba Aiele Teclehaimanot.

Admission to the seminary is allowed only to boys selected by their respective priests and to those who passed through entrance examination. The seminary accommodates seventy-five students at a time. They stay for nine months in the seminary and then leave for three months summer vacation. At the entrance day or the school opening in September, each student pays $5.00 [Ethiopian Birr]. Otherwise, they receive free education, free treatment, free bedding and free school books. The church finances the seminary. In fact, the money is collected from the Catholic people through donations.

The seminary follows the same curriculum as the government schools and teaches the same subjects with equal emphasis in addition to religious knowledge, Geez, Latin and liturgy. The seminarians participate in the National examinations of 6th, 8th and 12th grades. In the 6th and 8th grade examinations, in 1966 the seminary was 3rd in the list of Eritrean schools and in 1967 she became the 1st.

After completion of 12th grade, the students who are sure of their vocation to priesthood and who have got a good certification leave for the Ethiopia College in Rome at Vatican City for the study of Philosophy and Theology. The former requires three years and the latter four years to completion. At the beginning of the fourth year study of theology, the student is nominated as a priest. After the nomination, the intellectually elite are given scholarship to England for an M.A. and then return to teach in the seminaries.

The average priests are sent to rural areas to serve the church as parish priests. They live according to the rules and regulations of the Holly See under the supervision of the bishop in Asmara, today His Excellency Bishop Abraha Francois. In the developed countries, the parish priests are supported by their parishioners, but as in the case of Ethiopia, the Church provides their living expenses.

So far, about 2000 students, excluding the present, have entered the seminary. To our surprise, only 200 have become priests and there out of these became bishops. Yet, the church is wee satisfied with this rate, for even if her first aim is to obtain priests, she is glad to produce moral and disciplined laymen who may be good examples to the society. Having this in mind, the seminary stress character building and morality more studies of mere facts.

The people who have left the seminary, either from the secondary level or from the philosophy course are serving and have passed away after serving their nation. The most prominent of them are: Dr. Embaie, who was a foreign minister; Lorenzo Tazaz, also a foreign minister and Minister of the Health Department in Addis Ababa; General Zeremariam Azazi, the present General of Eritrean Police force and so on.

The Catholic Seminary of Keren is a small college, yet it produces great and wise men.