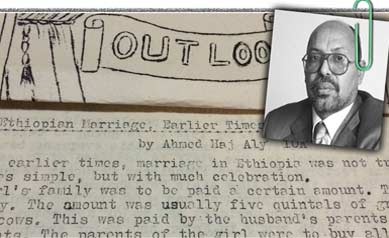 ARRESTED. Served as Minister of Tourism and later Minister of Energy and Mining. He was employed in that capacity until 2013 when he, along with Abdella Jaber and Mustapha Nurhussein (former governor of the South Zone) was arrested for his alleged role in Forto 2013, the attempt to take over the Ministry of Information and demand democratic changes.

To date, the whereabouts of Minister Ahmed is not known.

In his high school years in Keren Secondary School, Ahmed was one of the brightest students. After graduation, he left for Addis Ababa and then traveled to the Soviet Union for higher education. Thereafter, he joined the EPLF and remained a dedicated and active member until 1991. In 1993, he raised the PFDJ flag as Eritrea’s first ambassador to the UN.

Though Ahmed was born and raised in Keren, a gentleman who just split from the Isaias regime last year insinuated that he was less Eritrean. The gentleman expressed his seemingly apprehensive feeling that Eritrea’s flag at the UN was first raised, “by Wed-arbaAa”, a term used by nativists when they feel like depreciating the Eritrean citizenship of someone they don’t like based on archaic and primordial traditions. The remark angered a lot of Eritreans, particularly Kerenites who know Ahmed as one of them: a bona fide Eritrean who served his country with dedication.

The following is an article by Ahmed Haj Ali that appeared in 1968 on “Outloook” magazine which was published at “Atzie Dawit Secondary School” (Keren Secondary School).

At the time, the Ethiopian authorities’ directives dictated that Eritrea as a country, and Eritrean, as a nationality should not appear in the magazine. Thus, in Ahmed’s article, any mention to “Eritrea” was substituted by “Ethiopia”. Thus, the title of Ahmed’s article carried “Ethiopian Marriage…” which, if not for the censorship, it would have appeared as “Eritrean Marriage.”

For more information, refer to the first edition of this series here.

In the earlier times, marriage in Eritrea was not troublesome. It was simple, but with much celebration.

The girl’s family was to be paid a certain amount. This was not in money. The amount was usually five quintals of grain and about four cows. This was paid by the husband’s parents to the girl’s parents. The parents of the girl were to buy all the clothes and furniture needed by the girl.

Because of these things, sharing of expenses, the husband was always in good financial condition. Thus the adolescents were very anxious to marry, and many were married at the early age of fifteen.

The celebrations lasted for fifteen days. These days were full of songs, dances and games. In the mornings they used to play games, but in the evenings they sang folk songs. Nearly all men, old and young, took part in the dancing and singing times.

This was the custom of the earlier days. It is still carried out in the villages with few modifications.

Nowadays, marriage is something which is hated by most Eritrean males. The least amount of money now required for a good marriage is about $1000 [Ethiopian Birr] to be paid for by the husband. Where does these money go?

Firstly, the man has to pay a certain amount of money called Maher (dowry) to the parents of the bride. Besides, he is expected to bring her expensive clothes and golden ornaments.

During the days of the marriage, he must provide food for the visiting people. This may go on up to seven days. In the last days, he must bring food, sweets, soft drinks, etc. for those who are present during the celebration.

If we try to calculate this expense, it will not be less than $1000. We tend to agree with those who prefer not to get married because it is such a great expense on the husband and his family.

Again, just like Melaake Tecle and the others, Ahmed was also a blogger long before blogging was invented.

The most fascinating contribution I found in Outlook is the over six-pages long general knowledge information compiled by Hassen Ferej to help the 6th, 7th, and 8th grade students. That information surely helped many students prepare for the general examination that students took in 6th and 8th grade.

Today, in a time that students take google or local libraries for granted, Hassen’s work was  an extraordinary help for those who had to study for the exams.

Here is a sample of the type of information that Hassen compiled: 1) The biggest fresh water late is Lake Superior, USA, 31, 820 sq. mi. 2) The first woman to fly the Atlantic was Amelia Earhart, in 1961. 3) William Horsche found the planet Uranus in 1930 4) Tuberclosis is known as the White Plague. 5) Normal heart beats 75 time per minute…..

Hassen compiled about 350 such entries, some are considered trivial those days and students do not have to know them to pass their tests. But certainly, education has deteriorated to the extent that in the USA, “No child left behind” is leaving every child behind!

The copy of Outlook magazine that I have contains the following articles which I try to present in subsequent Negarit editions in the coming weeks:

NB: anyone who knows the whereabouts of the persons on the list, please send me their facebook pages or their pictures.