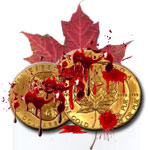 In Salem, Massachusetts, they threw suspected witches into a lake: if they floated they were witches and if they drowned, then they were dead witches. In the abysinian highlands in the past, an Anteregna (goldsmith) faced almost similar mistreatment.

Masons, wood-carvers, iron-smiths and goldsmiths sustained much of ancient Axum’s civilization. But the peasantry despised craftsmen; those who created things had to be practitioners of witchcraft. Of the lot, goldsmiths were the most despised- they were known as Anteregna, a reference synonymous with witches. The superstitious believed every Anteregna has demons and the society avoided intermarrying with them. Axum’s exorcists devised cruel ways to rid the goldsmiths of their demons… We will finish this anecdote at the end of the article.

Bisha’s Glittering gold is bright yellow, expensive and they say Eritrea has abundant deposits of it. If not for the authoritarian regime, Eritreans would have much use for it. But in the absence of basic freedoms in the country, gold has become a Midas curse. And where there is gold, there is an Anteregna—in Bisha the Antergna comes in the form of a Canadian company: Nevsun Mining Corporation and its demons. Yet, Canada is a supposedly democratic country. And though Nevsun is a legal entity, it is out there to make a buck. And though it cannot be considered ethical and responsible investor, it can not get away with slave labor in Canada, though it does in Eritrea where it doesn’t even have to abide by the Canadian environmental and labor  laws. Nevsun is dishonest and it is  run by executives who think they are The British West India Company of the day and they plunder the wealth of the oppressed with impunity.

A mini history of decolonization

The last century witnessed the most extensive struggle by colonized people. The idea of getting rid of a master who hauls away the bounties of the country, and the need to become a master of your own land seemed very attractive. Africans found an inspiration in the “anti-capitalist, anti-imperialist” rhetoric of socialism and its slogans. Armed with red books and violent class-consciousness, Socialism had developed an effective agitating rhetoric and the elite mobilized the people. They peddled make-believe goals to liberate their people and they assured everyone that socialism will transform the world into paradise.

When the colonizers packed and left the nations to cope with the control of the much talked about “exploited resources”, wealth was not forthcoming and miseries worsened. The violent struggles had left many festering wounds that are still crippling the nations where the oil fields and mines are guarded by unelected regimes in exchange for profit-sharing or kickbacks from the corporations.

The de-colonization proposal had attracted indigenous oppressors who now rule with impunity; most of the tyrants of today are liberators-turned-dictators. So much sacrifice, and years of struggle, ended up replacing a foreign tyranny with one that looks and talks like the oppressed people. And how do these dictators get away with the crimes they commit against their people? Where do they get the power to do that? They are often empowered and emboldened by interest groups. They are empowered by “pragmatic” politicians of the West. They are assisted by adventurous and corrupt multi-nationals: conglomerates and multi-nationals who care too much about maximizing profit and too little about its cost. And when the movers of the free-market economy do not consult their moral compass (most of the time they do not have one), the result is disaster.

Many people know how the corporate world operates, but very few have a clue how the mining business operates. However, after researching the environmental impact of mining (heap-leaching and specially open-pit mining that Nevsun is using in Eritrea) and the use of Cyanide, the subject is not so difficult to grasp. On the economic side, in the Eritrean case, one doesn’t need to know neither mining nor corporate business to realize that the citizens will not benefit from Nevsun’s projects, and that the revenues strengthens only the oppressive regime.

When Nevsun’s adventure took it to Eritrea, investors didn’t care about the environmental impact, or the emboldening of a tyrant, or the marginalization of the people in their own land. But when their pockets began to hurt because of Nevsun’s shoddy operations, they woke up. Still, they think Bisha is located at New York’s Wall Street when actually it is an expropriated property in Eritrea most of whose natives are in refugee camps in Sudan. That expropriation is highlighted in the illegitimate deal made between the Eritrean tyrant and Nevsun…of Canada. The property where Nevsun is mining is stolen property and its original owners did not have a say in the deal. By that, Nevsun proved it is anti-freedom and pro-tyranny. It is a company that deserves the wrath of all conscious freedom loving people. Its collaboration with the tyrant of Eritrea is a crime, something worthy of a determined fight that all should wage.

Nevsun’s gold coins are blood-stained, including the blood of its employee who was  brutally killed in mysterious circumstances  near Bisha gold mine. It is scrupulous, unbridled, and it seems there is no limit to the price it will pay in the quest of amassing wealth.

Though the Eritrean regime denies the existence of indigenous people in Bisha: “There are no indigenous groups located in the project area (National Museaum of Eritrea, personal communication, April 2006)”,1  Nevsun should know that Bisha has its indigenous owners. They are either languishing in refugee camps in the Sudan or elsewhere since the massacres of Ad Ibrahim in the late sixties. The much celebrated “liberation of Eritrea” didn’t bring those people back to their ancestral home. Instead, it enabled the conquerors, the ruling party of Eritrea, to own their properties and give it to Nevsun, whose excavators and earthmovers have defaced the land—a typical frontier mentality, one more location fit for a gold rush.

In a country where the price of dissent is heavy, the dispossessed Eritreans do not have a voice to object. The Joint propaganda onslaught by the Eritrean regime and Nevsun which came in the form of  “Cartoon Brochures”, “3D presentations” and “coffee shop discussions” does not give the deal any legitimacy. Nevsun of  Canada, a citizen of a free and democratic nation, should not buy stolen property from a dictator and be an accomplice in the crime of eradicating indigenous people in the name of development and profit. It should know how to strike a balance between its ambition for profit and the risk involved.

Buying A Stolen Car Is Illegal

If someone bought a stolen car in Ottawa and was caught driving it, the police will certainly arrest him. If he proved he didn’t know the car was stolen, he might escape with a warning: be careful! Do not deal in stolen goods again. But if he had bought the stolen car knowingly, he would certainly go to jail for being an accomplice of a thief. Which one is the case of Nevsun?

The Eritrean dictator is selling Nevsun stolen goods. Nevsun is empowering the dictatorship with hard currency that will be spent on reinforcing the tools of oppression against Eritrean citizens and not on their welfare. Some of it certainly fattens the pockets of arms dealers to the tune of about US $ 150 million yearly or, 25% of Eritrea’s GDP2.

Nevsun is not a mom-and-pop outfit and it knows the illegitimate nature of the Eritrean tyrant and that he doesn’t hold a deed title to Eritrea—he is ruling by the power of the gun. So, what are the owners of the resources supposed to do? Watch silently while their lives are worsening by the day and their jailer is being empowered by rich corporations? Why does Nevsun choose to be caught in the middle of a violent struggle between a people determined to be free and a tyranny determined to enslave the people indefinitely?

Nevsun is acting like a daredevil pitching a tent in the middle of a battleground where tyranny and freedom are facing each other. This warning has been out for a while and wise investors should take notice—many Eritreans opposed to the regime are considering Nevsun’s act as an in-your-face provocation.

Eritreans are struggling to establish a just, stable and prosperous democratic nation on the ashes of the authoritarian regime. They aspire to establish a free-market economy where entrepreneurship would be rewarded and where creativity and the resourcefulness of the people will be set free to be rewarded. They aspire to establish an economy that would protect and encourage investments, an environment where deals will be negotiated and sealed by elected representatives of the people. They dream of a free-press that will keep an eye on issues of public interest and dig deep to investigate corruption. They dream of a day when they will debate openly whether to endorse a deal or not.

When this dream is realized, as many dreams are, and Eritreans take hold of their country, Nevsun risks  being viewed as an extension of the demised dictatorship. In the minds of Eritreans, it is already being perceived as a supporters of a tyranny that is chocking them. One hopes that Nevsun would respond positively and stop its operations in Eritrea until there is a democratic government, until it can do business with the real owners and elected representatives of the people. It is important for Nevsun to establish goodwill with Eritreans, to give them a morale support in their pursuit of freedom—a gesture that Eritreans would be grateful for and would never forget. That would earn Nevsun a special respect in the eyes of Eritreans and the freedom loving people of the world. Nevesun doesn’t need to buy a gold ring from the Eritrean regime only to receive a bloodied ring together with a victim’s severed finger.

Now back to the unfinished story from the first paragraph:

The Anteregna would be lured to a place and would be directed to sit on a chair that has a huge concealed sharp tool similar to an ice-pick, a primarily  hair braiding tool. The unsuspecting Anteregna would sit on the sharp nail that would pierce his butt and he would cry of pain. That cry is supposed to rid the goldsmith of his demons!  It is just like what they did to witches  in Salem, only with a twist

(This article is a revised version one first published on awate.com in 2006)