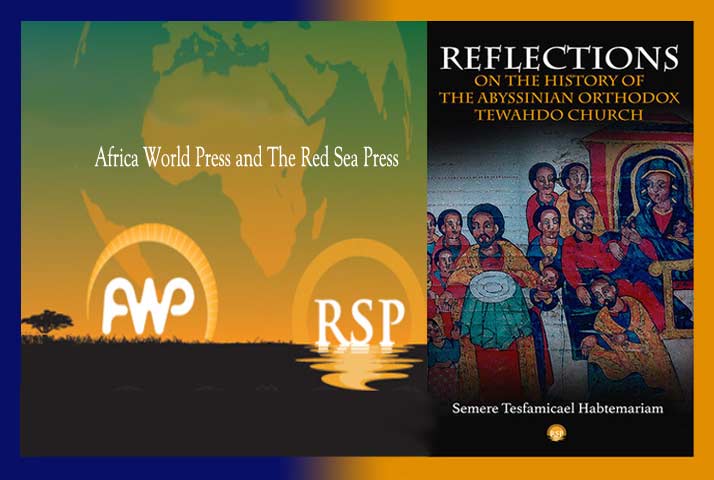 If is often said that, “If you can’t read the book you want, you gotta write it,” and writing it is exactly what I did in “Reflections of the History of the Abyssinian Orthodox Tewahdo Church.” It was an intellectual as well as a personal quest; I had a burning desire to know the story of my past. Today there are many Abyssinians who are Muslims, Catholics and Protestants, but this is their story too; it is their heritage. It is a shared past that, irrespective of religious affiliations, binds all of us together, and as such it has to be cherished, celebrated and be used for good purposes. And it starts by knowing about it; by reading about it; and by discussing it.

The book tries to understand how Abyssinia (most of Modern-day Eritrea and Ethiopia) was favored by the three Abrahamic religions: Judaism, Christianity and Islam, and how the Orthodox Tewahdo Church has evolved to be the source of glory and quintessential identity of the people and country. The Orthodox Tewahdo Church is the oldest and most venerated institution in Abyssinia where the simple piety of the people has remained untouched throughout its long history. It is not only a religious institution but a repository of art, music, culture, poetry, and literature which has an immense influence on the very essence of Habesha identity. It is a carrier of high culture (Gebre-Medhin, 1989). To some degree, understanding the Tewahdo Church is similar to understanding the last 17 centuries of Abyssinian history and civilization. It is the unveiling of this distinctive conglomerate and its forms and expressions that had long become the store-house of the cultural, political, and social life of the people (Ullendorff, 1973, p. 93); and the unearthing of the Tewahdo fossil where Abyssinian history is ensconced. More importantly, it is also the religious story of how the purest prayer of Orthodox Christendom (Hansberry, 1974) had risen from the source of the Nile to the mouth where St. Mark planted his seed. It is the embodiment of the purest seeds of evangelism, the miraculous story of how the baptism of an Ethiopian eunuch on a pilgrimage to Jerusalem, had given birth to the baptism of millions of Abyssinians back home.

In Praise of the Book:

Semere Habtemariam’s “Reflections on the History of the Abyssinian Orthodox Tewahdo Church” is a welcome contribution to our knowledge and understanding of a crucial institution that has shaped the culture and helped influence the politics of Ethiopia (and Eritrea).

To those who have heard of, or had the good fortune of having read the writings of Philosopher/Emperor Zera Yacob, and have had a modicum of knowledge of the various religious disputes in Abyssinian history; to those who have seen and marveled at the paintings at the Gondar Church of Debrebirhan Selassie; and to those who have had the rare privilege of listening to the  sermons of Abune Yohannes at the Axum Tsion Church in the late 1960s near the end of Emperor Haile Selassie’s reign (as this reviewer had)….and to all the devout followers of the Ethiopian and Eritrean Orthodox faith, Semere’s book is a boon. It is a welcome companion and an essential guide to understand the significance of what he calls the Abyssinian (i.e., Ethiopian and Eritrean) Orthodox Tewahdo Church—its origin, development, challenging history and its impact on the life of the people and governments of Ethiopia as well as of highland Eritrea. Semere’s book, based on an immense research and personal thought, plus a devotion to the faith, may raise some eyebrows but will excite and inform all readers irrespective of their own religious orientation. It is indeed a timely and welcome addition to the scant literature on the subject. I recommend it highly.

Prof. Bereket Habte Selassie, author of Deliverance: A Tale of Colliding Passions and the Muse of Forgiveness

Based on extensive research and well-written, “Reflections on the History of the Abyssinian Orthodox Tewahdo Church” represents a significant addition to the existing body of knowledge on the evolution of the Orthodox Tewahdo Church; the basic tenets of its theology, liturgy and rituals; and the preeminent role the Church has played in conserving, defending and developing the multiple facets of Abyssinian literary culture for nearly seventeen hundred years. In a very real sense, the book connects, in systematic fashion, the dots in the relevant literature to date and surveys the writings, teachings and practices of the Church as it evolved over the centuries. Branched into the Eritrean and Ethiopian Churches since Eritrea’s de facto independence in 1991, the Abyssinian Orthodox Tewahdo Church remains the repository of spiritual guidance and moral compass for tens of millions of adherents in the two countries.

I congratulate Semere Habtemariam for his excellent work and highly commend the book. On top of being a gifted writer, Semere is a committed pro-democracy activist with a demonstrated capacity to reach out and work with the entire spectrum of the various hues and colors of the Eritrean Diaspora political opposition in search of common ground. In an era punctuated by the resurgence and proliferation of sectarian politics and its destructive consequences, I believe that “Reflections on the History of the Abyssinian Orthodox Tewahdo Church”, in highlighting the history of essentially harmonious coexistence between Christianity and Islam in Abyssinia, would contribute to the continuity of religious harmony in modern-day Eritrea and Ethiopia.

Ambassador Andebrhan Welde Giorgis, author of Eritrea at a Crossroads: A Narrative of Triumph, Betrayal and Hope.

A quest for knowledge and understanding of his culture is what lead Semere Habtemariam for writing this book. When I went through his text, I figured out that the manuscript that I was reading does not seem written by an outsider to understand the core values of his religion, as the author claims. It is a thoroughly researched and well-organized work that examines the values and principles of the Abyssinian Orthodox Tewahdo Church and its history in relation to Christianity in general and the history of the horn. I learned a lot.

Dr. Girma A. Demeke, author of The Origin of Amharic

The book can be purchased by clicking on this link: Africa World Press, or Amazon

For questions concerning the book, contact the author through e-mail:<weriz@yahoo.com>