A Message To Tigrayans 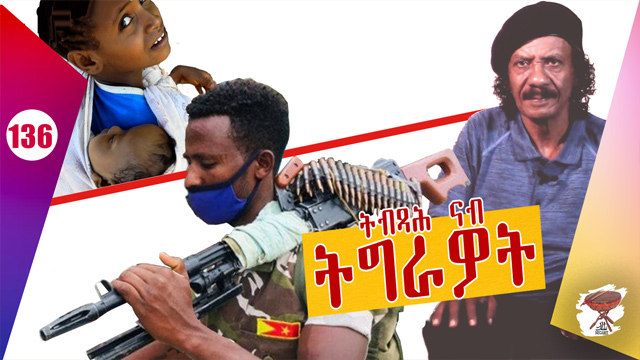 A fed-up worker decided to quit his job. He approached his boss who was standing behind a workbench, looked him straight in thes eyes, and told him, “Give me my dues, I don’t want to work for you anymore.” The boss asked for a reason, but the worker was adamant, “just give me my dues.” The annoyed boss remarked, “why are you talking to me with popped eyes?” The worker sarcastically replied, “do you want me to talk to you with my eyes closed!”

The other workers intervened and resolved the standoff to prevent punches landing on the boss’s face.

Two days ago I said I will share a message to our Tigrayan brethren—a few could have expected me to speak like a robot when I delivered the message; sorry, I don’t like stiffness. Then there is an annoying manner with which we support our arguments–it turns off some and discomforts others. I think we should neither overdo it nor deny our cultural communications is always sprinkled with quotes from the scriptures. However, I wish our region talked normally, like common people, not like theologians or preachers.

Words do not reflect only language, but also the psychology and cultural foundation of the people. It reflects either the humbleness of the speakers or their arrogance—I wish the stiff stood in front of a mirror and spoke to themselves before going public.

Languages have tones, choice of words, construction, pitch and facial expression and an audience perceives the message based on these elements before they can relate to it or shun it if the speech is full of dry words.

Eritreans Cultures in A Nutshell

In Eritrea we have a few distinct cultures. Sedentary Eritreans are hot-tempered and impatient. In their environment, space is smaller and distances between places are shorter, thus, they are used to reaching their destinations quickly. Usually they are also not good listeners, particularly if a speech takes longer than they expected.

The herdsmen are very patient. They do not mind waiting for a long time until a speaker finishes speaking. Their space is larger and distances are longer; regardless of how long it takes them, they can walk patiently until they reach their destination. And they understand impatience doesn’t make distances closer.

The uninitiated can take the costal dwellers for a calm people, but their rage is just beneath the surface. They are surrounded by hazy, featureless horizons and they have to be certain and resolute to sail towards a horizon they cannot see. But they know the sea is tricky, and compared to the other Eritreans, they are always wary about the unpredictability of their environment—a calm sea can suddenly become fierce and swallow anything floating on it.

City dwellers are a product of the three cultures, and though they keep traces of their original culture, they adopt a new culture—a mishmash of the three local cultures and many traits of foreign cultures that they find in the cities. However, the worst traits of city culture (in varying degrees, from one city to another) is the arrogance, the feeling of superiority, and the aloofness. City dwellers look down to their original cultures and want to climb the ladder of development, alone, forgetting their roots that they show their backs to the moment they become members of the perceived civilized place.

Eritrea is a combination of the above categories of people and cultures that shapes their psyche and their attitudes towards many aspects of life. There are many aspects of this characteristics and their byproducts that needs reconciliation in addition to the pending issue of Eritrea that needs to reconcile with its neighbors.

My main concern has always been the need for a reconciliation that paves the way for a peaceful coexistence… a vital path to stability and wellbeing of the countries of the region and their people. So, since I like to consider myself knowledgeable (by upbringing and experience), of almost all Eritrean cultures, I prefer to talk and write in a relaxed, uncomplicated straight-talk; I believe that’s the only way towards reconciliation based on truth, not on prejudice and aloofness.

Though my perspective is from the viewpoint of an Eritrean, it’s in no way Eritrea-centric; I am fully aware of the interest of our neighbors. If the interests of all stakeholders are respected, it’s easier to forge a normal, mutually beneficial, peaceful, and forward-looking formula for cooperation. However, it’s important that such an exercise should not gloss over the historical, political, and social problems the people of the region went through for many years. For a vision of cooperation to succeed, it must start by resolving the issues of the past. Only by doing so we can achieve a reasonable reconciliation that would change the statuesque from which no one reaped any benefit but bloodshed and mayhem.

At the moment, I care less for any political leadership, but if a country is invaded, its protection is the responsibility of its armed forces. In such an event, individuals and political parties should take a bold decision in allying themselves with one of the two extreme options. And that makes the position of Eritreans unenviable: allying with the invader is difficult and allying with the tyranny that commands the armed forces is even more difficult. Only the armed forces can resolve this dilemma by taking the necessary decision to save the day.

And this scenario wouldn’t even be considered if it was not brought up by the recent developments in Tigray. I hope the TPLF and its armed forces succeed in protecting the common Tigrayan people who have no one else to protect them. Eritreans liking or disliking the TPLF is immaterial. And I would like to congratulate Tigrayans for their military achievements thus far, despite the eight-months long gruesome atrocities committed against them. They waged a magnificent resistance, and their armed forced triumphantly marched into Makelle. But that shouldn’t make them entertain the idea of marching into Eritrea to unseat the PFDJ regime. Though thus far Eritreans have failed to do that, it is still their sole responsibility.

I understand the happiness of Tigrayans when they entered Mekelle, because as an Eritrean, I had the same feeling on May 24, 1991 when Eritrean forces marched into Asmara. How I wish time froze on that day when we were ecstatic and hoped to enjoy the hard-won independence forever. Alas, it was not meant to be. Unfortunately, thirty years on, Eritreans are living under the grip of a despotic regime that utterly disrespects them and doesn’t recognize their rights.

Over the centuries, the culture of our region has nurtured the crippling feudal legacy that made the people willingly submissive to any authority that ascends to the helm of power. That kind of timidity is a golden opportunity for the ambitious and selfish leaders. They always took advantage of the peoples’ loyalty and froze the region in a primitive situation with bad governance, corrupt politics, warmongering, and lack of freedoms. Our social and economic development is hindered, and, in its place, ignorance has spread, bloodshed has become a national pastime, and enmity and vengeance are kept alive. Unfortunately, Eritreans find themselves in a situation where they have no choice other than tolerating the corrupt PFDJ for fear of the unknown. And an ancient adage sums up the reason for our predicament: “the devil you know is better than the angel you don’t.” Today, many Eritreans are tolerating the deplorable situation, though they paid their dues for decades to be truly free, because they fear the angel they don’t know.

Eritreans suffer from fatigue due to the endless bloody confrontations– the whole country was turned into a large military camp since three decades (1991-to the present) on top of the previous thirty years (1961-1991) in which Eritreans invested sweat and blood for the sake of an illusive freedom. Had the ruling PFDJ party operated like a liberating force, and not like a replacement of the old occupational regimes, Eritrea would have propelled itself into a developed country and would have ushered a peaceful era. Alas, sixty-years of Eritrea’s life was wasted changing hands from one tyranny and oppression to another.

The schisms, conflicts and mistrusts between Tigray and Eritrea are the result of parochial mentality and fanatic adherence to ancient traditions and feuds. True, only education, developments and the realization of citizens’ rights across the region can resolve such a problem. However, good governance is vital to tread in that path; and the intelligentsia, the elite of the societies, are supposed to be the agents of change. Sadly, in that regard, the experience of the region with its elite has been an abysmal failure.

The elite of the society led a magnificent and successful military feats until 1991, but thereafter, they failed in setting up a vibrant civil society. Their attitudes have wobbled between cunning and confrontational postures living in a rigid warlike world of their own, and fixed to brinkmanship. They have failed to transform their societies into a tolerant, liberal, and just societies. Instead of acting like liberators, they chose to peddle populist slogans; they became followers of those they are supposed to lead by tickling their raw nerves.

Now, whether the elite likes it or not, the two countries are destined to live side by side. Neither Ethiopians can tow their country to the middle of the ocean to escape from the neighborhood, nor can Eritreans, Sudanese, or Somalis or others do the same. Therefore, they must make the best of the neighborliness and work for a prosperous future—not by sloganeering and bravados, or by shooting and jailing, but by working hard for the development and prosperity of the region.

If we further narrow down the Ethiopia-Eritrea issue to a Tigray-Eritrean relation, it is also problematic and costly because of the embarrassingly prevailing primitive mentality.

Tigrayans could have their misgivings, observation, experiences, and reservation about their relations with Eritreans, so do Eritreans. Here I will touch on the Eritrean misgivings without forgetting the Tigrayan misgivings that I know of—mainly the last collaboration of Isaias Afwerki with Abiy Ahmed in committing atrocities in Tigray, by pushing helpless conscripts in a war they shouldn’t have been part of. Also, there are disturbing news coming out of Ethiopia, that some Eritrean refugees were victimized by angry soldiers—a few members of the opposition were kidnapped from Tigray and other parts of Ethiopia and there are reports of a few who were killed.

The main problem I see is with the misconstrued image of Eritrea that the elite of Tigray perceive, and don’t seem willing to change. Here, the religious element is so clear. When many Tigrayans look at Eritrea, they focus on the Eritrean highlands that they perceive as Tewaḥdo-Christian, Tigrinya-speaking (and they even sub-divide that into smaller segments) and consider the rest of Eritreans as appendages that should adopt that crooked politics leaving aside their feeling, their views, and their national aspirations. Sometimes, this may seem an exaggerated assessment based on speeches quoted out of context, or a slip-of-a-tongue uttered in moments of heated arguments or anger. But even if all that is ignored, there are enough, serious, lopsided views that the elite displays. And that leaves Eritreans always on their toes adding to their mistrust of the Tigrayan elite. That, must be honestly addressed and It must end.

Today Tigray is again in the hands of its own children, but there is fear the 1991-1997 type of exclusive relations will be repeated in the future.

Finally, how Tigrayans will decide their future is up to them I just wish they will take a cautious and farsighted decision. For two-decades, myself and my colleagues have been calling for a real dialogue with Ethiopians, but the responses were not encouraging. This time, I am hoping some individuals who consider reconciliation as an important undertaking will be proactive.